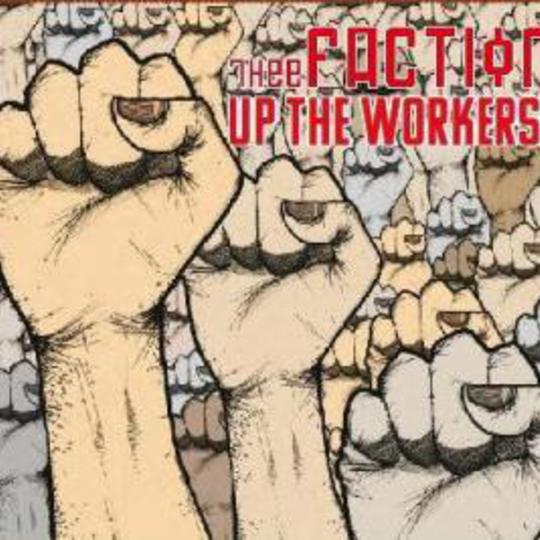 After dismissing a bunch of alternatives, Thee Faction's song 'Only' reveals the secret of liberation. "Only Marxism-Leninism can set you free," vocalist Kassandra Krossing sings sweetly alongside a tinkling piano. Ah ha. Such ideological utopianism is nothing new - and the music it's set to isn't either, being pure rock n' roll - instead, it's the combination of the two that's unique. But, as Thee Faction do Socialism 101 in their debut album Up the Workers, they prove more entertaining than hectoring - and as a result, perhaps more likely to provoke a knees-up than a revolution.

In Up the Workers, Reigate's R&B revolutionaries (as Thee Faction half-jokily call themselves) run the gamut of socialist basics, with songs about protesting, our incompetent economic system, the Left's surrender to the status quo, the brilliance of the Communist Manifesto, and how to deal with your Tory friend (tell them to fuck off). It's a lot of fun, it's undeniably stirring, and its heart is in the right place (then again, it's my kind of politics, so I don't have much to take issue with).

But what I find incongruous, what I can't get my head around, is the music. Those straight-down-the-line rock n'roll showtunes are lots of fun - there's a sweet sax solo in 'Deft Left', a jaunty holler about the Left needing to make a new start, but in 'Customer', listening to the vitriolic howl, "You're just a customer - you consume," repeated again and again, I got distracted. It sounded… well, shit, it sounded like 'Greased Lightning'. Now, that's no bad thing - I loved 'Greased Lightning' when I was a teenager - but it was weird. Thee Faction's music really is the kind that requires a quiff and a few tattoos to pull off perfectly. And so while the album's ideological points are pretty much spat out with a pleasing amount of passion and disgust, the music, while being enjoyable and energetic, hardly seethes. I don't get it as protest music. I get it as good-time music.

But then, that's just me. Radical leftist protest music doesn't necessarily need to sound like Gang of Four or Fugazi in order to persuade. Plenty of bands with radical left politics don't sound like that. Only I think that calling Thee Faction's music 'blistering, unpleasant R&B' (as they do) isn't true. It's not unpleasant. It's the kind of music that would make you get up and dance. And while there shouldn't really be an incongruity with angry Marxist expression there, somehow there is. It doesn't mean that Thee Faction haven't done a bang up job in homing in on some of the inexcusably shitty parts of the current economic system and then cleverly suggesting ways to - and not to - subvert them (my favourite being in 'Only', where there's a sly lyric on the uselessness of Facebook campaigns and smashing Starbucks windows) - they have. I'm not denying the album's raucous energy. It's just that their music is entertaining in a very conventional way, and so it's confusing to know whether to shake your fists or your hips.

What I want to do, more than anything, what Up the Workers yearns for (and I'm not basing this on Fucked Up's David Comes to Life, though that may figure somewhere in my thoughts) - is to make a musical of it. A socialist musical. There are enough pertinent, catchy hooks to make it great. Scrap the boring bits where the band are just enjoying the bombast and fun of the music a little too much and it's going nowhere; keep the rest. I'm thinking Bertolt Brecht meets Lionel Bart. The gradual awakening of a young Marxist working in a Reigate factory as it dawns on her how much the system is set against her. Yes, that does sound a bit like the bones of David Comes to Life. Never mind. It's not as though they'd be the same thing - that's a rock opera, this would be a musical. There would be dancing. Sympathetic characters and a strong narrative. It would be bloody brilliant. Thee Faction actually write showstoppers - so why waste them?