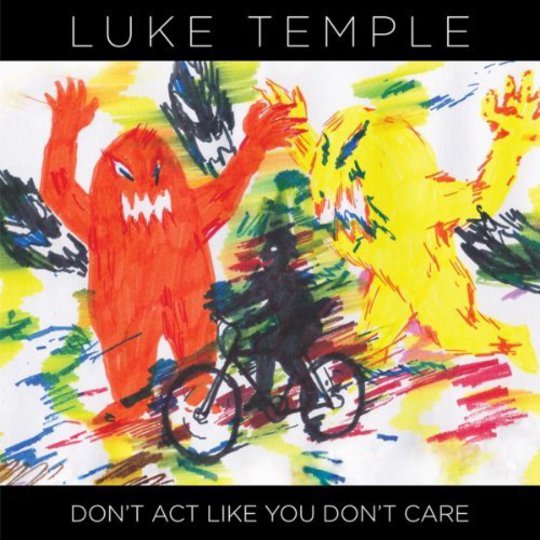 Of late, there’s been too much disingenuous faffing around the ether of the diluted essence of the once-vital now seemingly-forgotten craft of making simple, traditional and meaningful music of the sort that SINGS to the SOUL. It’d probably be easier for the both of us if we didn’t pretend examples were necessary to make this point, so, hey, let’s just not go there.

Now, Luke Temple, moonlighting Here We Go Magic mainman, is a former plasterer, but if he knew what was good for him he would be a former lumberjack. His vocal is a curiously yelpy take on the kind of gruff that’s just innocent enough to be lovable, but still wise, intriguing; his beard is of a grain enviously full and rugged, and his third solo record is Grizzly Bear’s Veckatimest had it been recorded in a remote Wisconsin cabin. But alas, Don’t Act Like You Don’t Care - a largely acoustic EP in stark contrast to the hectic, spacey outpourings of his day-job - is unlikely to engrave any lasting designs into the sandpit of hip indie-folk, because Luke never was a lumberjack, nor lion tamer or chicken-factory recluse - he’s simply a gentle old dog panting eagerly in the corner of indie’s candlelit dining room.

But, three years after its release was postponed to accommodate the success of Here We Go Magic’s debut, Don’t Act...’s lack of zeitgeisty sex-appeal is also part and parcel of its distantly enchanting personality. If Don’t Act... does only one thing, it invites you to properly care, with broad melodic arms inviting wide welcoming tunesmithery. Fortunately it doesn’t do one thing, it does lots of satisfying, intricately chaotic and warmly wonderful things, and occasionally - as on the two opening tunes - all the above simultaneously. It’s a record that wants to be loved, and, for better or for worse, it represents something you might hesitantly refer to as the anti-cool Veckatimest. But this is fine, because top to bottom there’s a buoyant integrity, a javelin-directness to the songcraft, the lack of which was a major gripe for those skeptical of the Grizzly Bear breakthrough’s dubious yet seemingly firm lodging amongst the class of ’09. The songwriting here is of a splendid stripe throughout - ‘Luck Part’ has all the bare, twilit George Harrison delicacy of a lost Elliott Smith, while ‘So Long, So Long’ delivers some horrifyingly well-restrained, sorry-but-not-for-itself reflection with bleary-eyed sobriety: “So long so long / To the sadness in your eyes / I never gave you what you wanted / I never settled your poor mind”. But the all guns blazing rapture of starting piston ‘In the Open’, and equally swoonsome, heart-throbbing cat-call for the spiritually sound, ‘More than Muscle’ (“He sees all those little people / With their heads stuck in their hearts / Like insects in some ever-burning bush”) are clinking glasses with the very best of their breed this year, with bends and stretches of structure suggesting a reigned-in, smoothed-out Joanna Newsom.

The rest of the record is suddenly and gracefully, if somewhat confusingly, scooped up in the slightly irksome breezes of troubadour lo-fi, though considering the chops of that opening brace it’s hardly a deal breaker. Nonetheless this makes Don’t Act... a difficult one to love, generally lacking the heavy sense of place and time to be found thrusting the bona fide twenty-first century indie brilliants into the comely embrace of songwriting modernity. But it requires a hefty assurance to take on a subject as limp as unfulfilled ambition - ‘Ballad for Dick George’ wraps a tale of bleak and easy solitude and out-of-reach treasure in a poignant yearning - and still come out the other end with a you-should-see-the-other-guy gleam. And while there are hoards of similar, inferior folk rock records polluting highways and saloons worldwide, Temple is better than the folksy ankle-biters because he updates and outweighs the wrung-out subject matter in both nous and nuance. Like your dead granddad’s rat-bitten armchair sitting in the spare room, this is a record whose comforting scent is familiar, sure - but not entirely pleasant if you’re up for properly sticking your nose in. Or something...