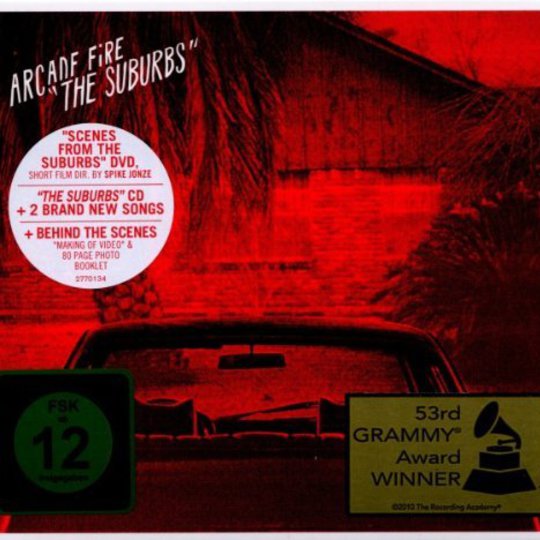 The Suburbs, I’m guessing, needs no introduction. Arguably the independent album of 2010, Arcade Fire’s third outing smashed charts, polarised opinion and saw thousands baffled as to (who exactly they were)[http://whoisarcadefire.tumblr.com/]. Now, it’s back in a bigger, better special edition, including two extra tracks, bonus material, and Scenes from the Suburbs, a half-hour short film directed by the band and Spike Jonze, expanding upon the album’s themes of youth, war and life in suburbia.

But before you roll your eyes at yet another cynical ‘deluxe’ edition cash-in (as if the string of number ones, countless festival headline slots and a Grammy didn’t generate enough money) consider this: Spike Jonze and Arcade Fire started filming Scenes from the Suburbs back in April 2010, months before the album was released. In fact, many may find the album making a lot more sense than it did on first release having seen the short. The concepts and narratives going on within the lyrics on the album could be dizzying, confusing and a little repetitive (the kids! The children! The kids! THE KIDS!) but here we find them beautifully illustrated. A particular case in point would be ‘Suburban War’, which seems to have been the main basis of the film’s plot: “I can remember when you cut your hair/I never saw you again/Now the cities we live in could be distant stars”.

As you might expect, the album provides an almost omnipresent soundtrack, from the fantastic opening scenes set to ‘The Suburbs’ to ‘Suburban War’ playing out as the credits roll by. They really manage to pack them in, with ‘Modern Man’ squalking away from a record player and ‘Wasted Hours’ coming over the radio at one of a road trip’s more sombre moments, which many other instrumental snippets from the album providing incidental music. It does seem a terrible shame that the short comes to such a morose climax, ably soundtracked by ‘Sprawl I (Flatland)’, especially with the album’s euphoric close in mind. The bittersweet ‘Sprawl II (Mountains Beyond Mountains)’ would have perfectly summed up the mixed emotions that an older Kyle feels for his former friend Winter; the nostalgia for the summers they spent together tainted by the memories of how it all went wrong.

The main cast, who are all high school students with no previous experience of acting, make an excellent job of conveying the naivety of their characters amid the backdrop of growing social unrest. Sam Dillon, who plays the lead as Kyle, is particularly arresting, as is Justin Arnold, whose role as Winter’s war-torn older brother Terrance is brilliantly creepy. The band themselves also feature in the film, in typically self-deprecating cameo roles; see Win Butler as an awkward neighbourhood cop, Richard Reed Parry as a fumbling diner chef and the playful hubris of Jeremy Gara screaming his heart out to ‘Month of May’ at a teenage house party.

Scenes from the Suburbs captures the fleeting moments in life where we take our first steps into the adult world. Kyle and his friends immerse themselves into the exciting freedoms of teenage life – road trips, parties, first loves – but also become increasingly aware of the cruel and dangerous forces of life that surround them. Our protagonist may lose his innocence, but the happiest memories of those summer months will stay with him forever, no matter how grim the modern world has become.