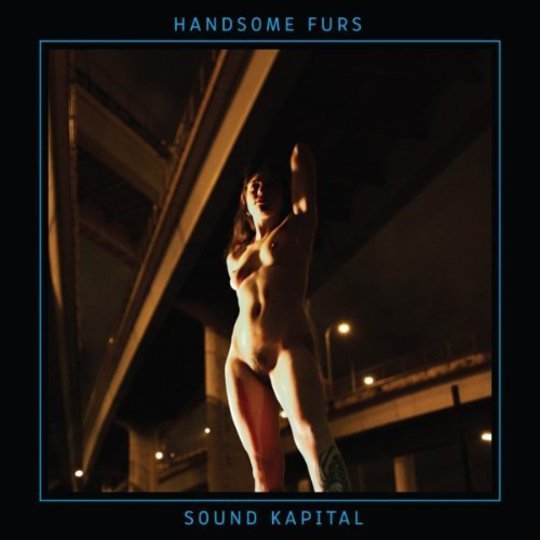 With Wolf Parade now officially on (the increasingly clichéd sounding) 'indefinite hiatus', Dan Boeckner's Handsome Furs return with a third record that signals a continuation of Plague Park and Face Control's assured steps away from Wolf Parade's buzzing and rattling indie-rock melodicism. If the progress between each Handsome Furs record seems gradual and tentative the disparity between Sounds Kapital's high-gloss electronic finish and metronomic beats and Boeckner's former 'full-time' band is quite striking. Sound-wise the real differences between the record and its predecessor are relatively subtle sonic changes as opposed to a great stylistic reinvention. This album was written entirely on keyboards which has the somewhat inevitable consequence of Alexei Perry's keyboards/synths dominating the record. Boeckner's guitar is still more or less a constant presence, but it plays a mainly supportive role involving distorted chords or gnarled one string picking which is occasionally difficult to distinguish beneath the staticky buzzing of synths. The corrosive riffing on 'Cheap Music' is one of the few instances of guitar dominating the musical foreground and combined with the punchy primitive drum machine and lead melody played on gauzy synth it sort of resembles a more synth-pop indebted version of Atari Teenage Riot.

In fact that's perhaps a comparison that bears greater consideration due to the subversive agit-pop lyrical thread which crops up repeatedly. The duo have cited the influence of the time they spent travelling in Eastern Europe and Asia and there's no ignoring the anti-authoritarian sentiments of 'Serve the People' (“They don't serve the people, keeping everything under control”; “Diamonds and gold for the idiot sons, all the privileged thieves come and make things run”) and 'What About Us' (“They're an army of thieves, they've got everything they need, but what about us, what about us?”).

Boeckner isn't the most nuanced lyricist in such matters, but that's not exactly the intention and this righteous anger materializes more generally in the streamlined electronic urgency of the record. Streamlined, but not stripped-back, because Alexei Perry utilises an impressive array of interlocking synth drones, stabs, gargles and swirls. While the metronomic drum-machines have been essential to Handsome Furs since Plague Park, they are no longer accompanied by insouciantly strummed guitars. The result is a record that is muscular, taut and bright, both melodically and rhythmically. 'Damage' and 'Bury Me Standing' are representative of the record's fiercer side, the former featuring a crude-punk beat, distorted Suicide bassline and hollow barked vocal from Boeckner. The latter chugs along on a staticky buzzing synth which is augmented by staccato bass throbs and a catchy echoing chorus to boot. As you might expect, with this more urgent sound, Boeckner's vocals are also probably the most highly-strung he's committed to record.

The almost relentlessly high tempo of the record does get a little wearisome, but there is respite in the aforementioned 'Serve the People.' It might be the most earnest song on the album, but it provides a musical diversion in its leisurely pacing and beats with a more satisfyingly solid thwack to them compared with the crisp pads which dominate.

For all the subtle changes that have been made, one thing that remains is the duo's melodic sensibility. If the thought of all the self-righteous politicking makes Sound Kapitol sound heavy going, then I should assure that it really isn't so po-faced. The aforementioned 'What About Us' is a tick-tocking dancefloor filler that would have been at home on Robyn's Body Talk which culminates in synth strings a la Dazzleships-era OMD and Boeckner pleading “Come on break my heart!”. Obviously inspired by the act of travelling rather than the actual locales visited 'When I Get Back' opens the record with skittery beats and waves of euphoric Euro-disco, with Boeckner exclaiming “When I get back I don't feel the same anymore”. The thematically related 'Repatriated' strikes that perfect bittersweet note between emotive synth-pop and fierce mechanistic dancefloor precision.

While Handsome Furs display a knack for melodically making the most of a limited range of instrumentation it would have been nice to hear them stretch out a little musically, especially given the transcontinental inspiration behind the record. Nonetheless, Sound Kapitol is a successful, if slightly creatively stifling refinement of a fruitful and unique musical partnership.