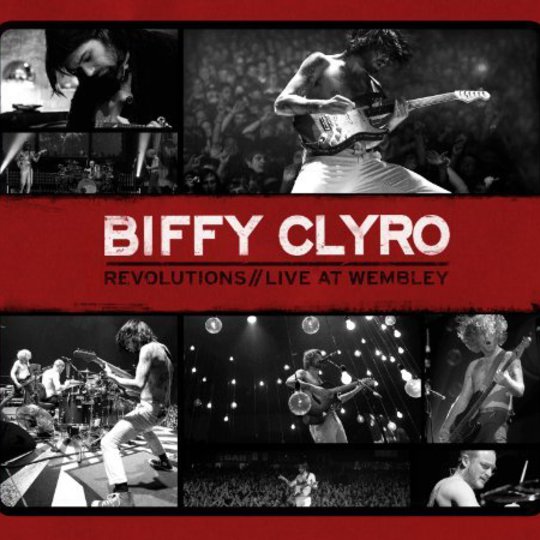 A lot of people might not expect to get much of a kick out of watching a film of a Biffy Clyro gig at this stage in their career. Perhaps you saw them on the main stage at Reading and Leeds last year and (like me) found it hard to be moved by hearing however-many-thousand people sing along to that song off The X Factor. It just didn’t resonate in the same way that hearing a few hundred people sing along to ‘Joy.Discovery.Invention’ used to.

Their gig at Wembley Arena was filmed just a few months after the festival season ended, in December, and builds the Biffy Clyro live show back up the sort of scale that was so disappointing in the summer. Plus now, the stage is dominated by huge screens that display all sorts of expensive-looking visuals, in amongst dozens of strobe lights and amplifiers. The film itself also looks as though it’s had a fair few quid flung at it too. This is no hastily cobbled together ITV festival package – there are huge, sweeping pans over the ocean of moshing bodies, dramatic slow-motion sequences and awkwardly framed arty shots.

No doubt this all sounds like sacrilege to those members of Team Biffy who, understandably, wish the band would lose the pomp and go back to shaking the foundations of the nation’s Barfly venues. But like it or not, Wembley Arena is where Biffy Clyro find themselves these days – and if this DVD’s commentary is anything to go by, no one is more bewildered by that than Simon Neil, James Johnson and Ben Johnson.

It’s that commentary that gives Revolutions depth, making it a worthwhile purchase for anyone who’s ever had a passing interest in the band. For one thing, the band are often brilliantly funny, and perfectly aware of how insane it is that they should have reached the point of playing Wembley Arena. They poke fun at their over-the-top visuals, and laugh at Neil when he rocks out at the end of the runway that leads into the middle of the crowd, known as the ‘ego ramp’. They even have a light-hearted dig at their own fans, who seem incapable of clapping along to ‘Living Is A Problem Because Everything Dies’ in time, and mock the cockneys in the crowd by singing along to their own songs in clumsy English accents.

They are at their most illuminating when they discuss the older tracks as they are played. Biffy Clyro still seem amazed that they should be able to play songs like ‘57’ and ‘There’s No Such Thing As A Jaggy Snake’ to this many people. And when Simon Neil says he still finds it hard not to cry when he sees people singing along to his songs, you believe him.

In terms of the actual performance, Revolutions truly captures Biffy Clyro at the top of their game. They hurl themselves into ‘The Captain’ with the force and ruthlessness of an invading army; the vocal harmonies on ‘All The Way Down; Prologue Chapter 1’ are gloriously crisp; ‘That Golden Rule’ simply sounds gigantic while ‘Glitter And Trauma’ kicks in with apocalyptic power. You can say what you like about their recent songwriting – as musicians and performers, Biffy Clyro are practically flawless.

The setlist is certain to disappoint many, as almost half of the songs come from the far-from-perfect Only Revolutions (though to their credit, in the DVD commentary Biffy Clyro stress the importance of representing all of their albums in their live show). The CD version exacerbates this problem, by omitting the likes of ‘Joy.Discovery.Invention’, ‘Justboy’ and ‘…Jaggy Snake’. This does make you wonder whether releasing a CD compilation of songs from the last four years is really worthwhile for a band that has five albums to pick from.

Really though, the full DVD version of Revolutions is as good a balance of old and new material that we’re ever likely to get from Biffy Clyro these days. And ultimately, as well as being beautifully shot, this film captures a band who are more thrilled than ever to be playing the songs that they wrote 15 years ago, as well as the songs that they’ve written more recently. Most importantly, they play every song phenomenally well, with unwavering, utterly endearing humility, to a rapturous audience. It’s a testament to what a little band from Kilmarnock can achieve.