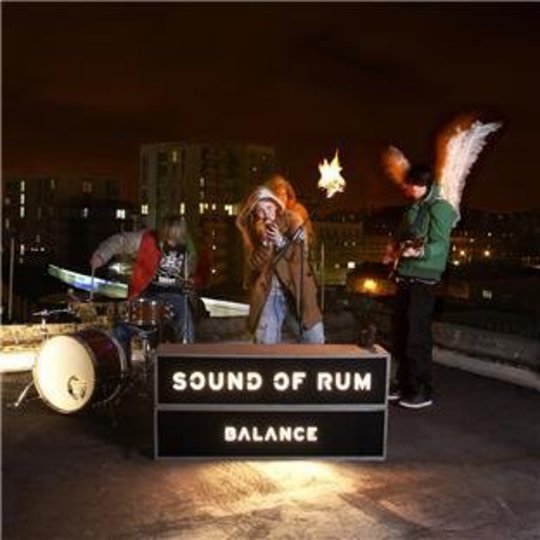 And so it begins:

“ I push bullets out of my chest/breathe raps-eat prose/hear rhymes scream when the breeze flows/drink, flow, clutch my touch, I – taste vision/a successor to Antigone’s tradition”

Sound of Rum's Balance is a record with epic intent – and like all good epics it opens in media res. The central trope is offered up hastily and without apology – a lone voice, most likely with some manner of fire on or about their person (eyes or heart are the more generally accepted locations) stalks the wilderness/wasteland of modernity while utilising their prophetic defiance to undertake the task of sorting the spiritual wheat from the populist chaff. I call this genre - ANTIGONEAN SWAG: I wrote a manifesto, in rap form... 'I coin words every day all rib-less and Biblical / keep my sentiments vague, all trite, all elliptical/ I crush meanings for kicks with my heavy-handed lexicon / the Signified is Eurasia - Signifier’s Mr Ghengis Khan... or something'.

The self-aggrandisement is relentless, in the opening few minutes of ‘Rhumba’, lead vocalist Kate Tempest spits with the impotent fury of the punch-drunk autodidact who is eager to let everyone know that they don’t really watch much telly. The intention of the record is obvious, it is meant to be raw, wild-eyed and astral – instead it often reads like the hurried notes scribbled on the bottom of an exam script - ‘if you run out of time, just do some bullet points that show what you would have written’

“I wore my bones dry to climb the cliffs of knowledge[…] Speak with the same tongue the old poets spoke with/I’ll dash a sequence of words into an opus[…] You got a reader/of Shakespeare, Beckett, Blake, Sophocles, ancient mythology, eastern philosophy.”

Leaving aside for a second the question of whether it is actually possible to ‘read’ Sophocles, the problem here is obvious: this record lumbers from the outset under an unbearable weight of lyrical pomposity and vainglorious bluster.

Balance is one of the few records which genuinely does stand or fall on its lyrical content. Tempest, a respected and often powerful performance poet, is front and centre throughout and considering how genuinely stirring she can be it is actually sad to watch her flailing so badly as the band lurch leadenly from track to track. The playing and the arrangements don’t help; every single one of the twelve tracks is an exercise in the kind of undercooked coffee table jazz last seen with the Brand New Heavies or Incognito. Occasionally some mildly angry rock stylings rear their head - this is worse, so much worse. The effect these constraints have on the substance of the tracks is lethal; Tempest hurries and stutters, missing polysyllabic flourishes again and again as the ‘beat’ pointlessly meanders, searching for a purpose (or, alternatively, a Heather Small guest vocal). Most of these tracks exists in spoken word format too, it is well worth seeking them out; listening to Tempest stretch her legs, lazily roll syllables, intone dynamically and wrench emphasis from unexpected places is often unbearably moving- listening to her rap along to some utterly atrocious noodling is a little bit embarrassing.

In such a context as this, the religiosity of the content grates – badly. It is striking just how vapid the apocalyptic mindset can be sometimes; journeys made under brooding skies, a seemingly endless clambering of mountains, lots of washing things clean, too much judgment, too little thinking: “snakes never understand the way the lions live”.

Is this a reference to psalm 91:13? If so, why? The specious co-opting of Biblical rhetoric is, putting it charitably, dull. It is a quick dip into the collective bank of cultural metaphor without ever really acknowledging the realities, or otherwise, of the source texts. Sound of Rum use the Biblical grab-bag in the same way they use literary reference; to carve out a space from which they can denounce the ills of the world whilst upholding their own sense of divinity. The overwhelming feeling is of monotone self-importance: Their record might not be great, but at least they are not “commuters on trains," with… wait for it.. “COMPUTERS FOR BRAINS!!”

All of which amounts to a great shame. Tempest is undoubtedly talented; you can count on one hand the performance poets who outstrip her in terms of ability. She possesses, at her best, a winning earnestness, a combination of tenderness and gravity, and a willingness to occupy the intersection of human emotion and social forces. Occasionally, this underlying grace and dexterity shines through: ‘End Times’ has one verse in particular that could stand shoulder to shoulder with the best Jehst has to offer: “I can smell this thunder coming, I can smell this rain/ You’re the only one I ever knew whose arms could hold my flames/ without burning like those others burn and you tell me hell’s to blame…”

There are few closing rhymes that could undercut the tactility of that. Undeterred though, Tempest seeks them out. The rhyme is completed with the almost comically absurd: “I told you hell’s a choice you make, I know Blake would have said the same”– Would he? Really? Sounds more like the doggerel you might find on the FAQ of a fundamentalist website.