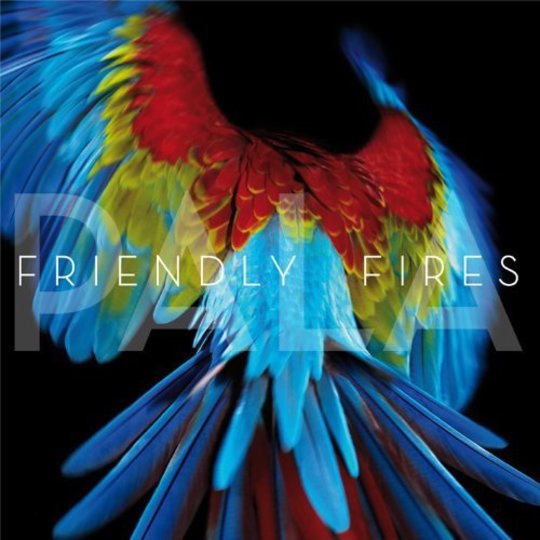 Friendly Fires always did have the potential to be one of the UK’s great pop bands, if only they’d stop pretending they were an indie band. On Pala they’ve lived up to that promise, evolving from making-dance-hip-again to full-on poppers‘o’clock. Last time they were bringing the funk. This time they’re taking us off to Ibiza with a couple of Es hidden in their shoes.

The brilliantly snarky opener ‘Live Those Days Tonight’ takes full aim at all those tedious people who insist the young kids can’t party because ‘you weren’t there, man’. You know, the idiots who you want to tell to just piss off back to their City jobs and suburban homes in their Ford Mondeos, instead of trying to prove they can still rock the glowband look. Word from the wise: glowband was NEVER a look.

It’s only fair to warn you at this point that ‘Hawaiian Air’ contains the line “Watching a film with a talking dog”. If nothing else, the band have succeeded in writing a lyric utterly impervious to anything any reviewer can throw at it. Furthermore, the song appears to be, as best as I can figure out, about fear of flying. Not just the obvious flying as metaphor for paradise/love/dancing the night away, but actual, proper fear that the giant washing machine you’re currently sat in is going to go splat. This is not something you often hear discussed in songs, it must be said. It’s not exactly a lyrical triumph, but it’s such a fun, uplifting song – with the payoff of amazing island holiday times - that they get away with it. Just.

Elsewhere, ‘Show Me Lights’, with its walloping drums – ‘borrowed’ from Bobby Brown of all people - and ginormous hook in “Take me back in the darkness”, is the most likely candidate for a massive summer single. It is also, frankly, one of the album’s smuttier moments, with lines like “With every move you make/Your hand shows me the way” and imploring the lucky gal on the receiving end to “show me how you make it glow”. Presumably not in the ‘ET phone home’ sense of the word.

It’s not all dance/’glow’-fuelled utopia down on Friendly Fires Island, though. The euphoric moments of attempting to forget the world are dotted around the album’s main topic: that classic pop band motif, the relationship gone wrong. ‘Blue Cassette’ finds Ed Macfarlane transported to relationships past, through listening to a former lover’s voice on old tapes he’s dug up in the garden. Both ‘Hurting’ and ‘Pull Me Back To Earth’ find Ed bemoaning “the pain of your touch” and “your love, an illusion/All your lies I keep on living”, over-investing in a one-way relationship that he can’t let go of. On ‘Chimes’, continually strung along and knowing it, he laments that he “can’t stop chasing your love”. Just when you think Ed is starting to remind you of that bloke who you met once in a bar, ran away from and then started receiving a million Facebook messages from, we get the admission that “all I want is to feel true love” in ‘True Love’. Ahhhhhhh. Whoever the string-along girl is that the bulk of this album is about: you’re probably a muppet.

What we have in Pala is not some great band reinvention, or some desperately profound effort; it’s giant choruses, relatable lyrics, a million earworm riffs and 11 dance anthems. If there's a bone to pick, it’s in the fact that it occasionally feels just like a collection of songs rather than a cohesive whole. This is particularly evident with the title track itself, the one proper slowie, which for some reason is right in the middle and very obviously divides it into an album of two halves. But then, that occasional feeling of disjointedness is something Pala shares with its predecessor. And like that album: pop, indie, whatever - who cares when the songs are this much fun?