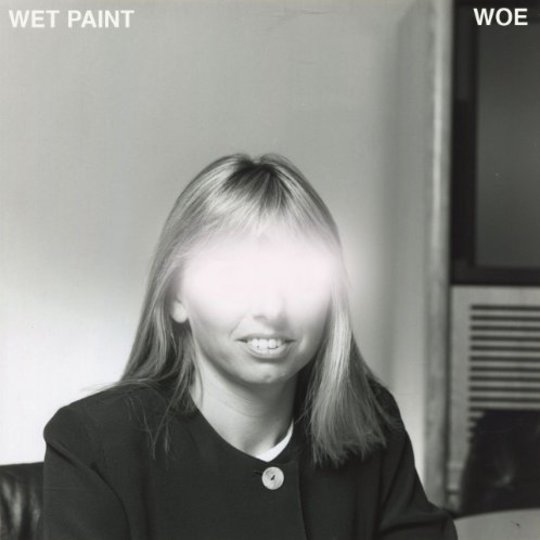 Wet Paint’s second album should be a weird one, and one that should suffer and benefit from the same traits as their debut. Predominantly, in Woe’s lavish obsession with US slacker indie-rock, Wet Paint offer music that scrambles between sumptuous, intense, beautiful, anti-anthemically anthemic and loose. But in displaying the musical influences so brazenly, and with an East London band playing with a tangible absence of ego, Woe has to wrestle hard to remove itself from an intellectual dot-to-dot of influences, as opposed to being an album that can be enjoyed at the level it is undoubtedly intended for.

When the Beatles' posthumous ‘Free As A Bird’ single came out all anyone wanted to do was spot the clever visual references to the back catalogue. Throughout Woe that instinct infuriatingly emerges; the Breeders styled backing vocal in 'A Bird’s Yawn', the ongoing Dinosaur Jr. guitar walls, the beautiful-ugly Sonic Youth guitar clanks or front man Babak’s generally Malkmus-esque yawns. Whilst this feels like an enthusiastic homage, there’s an element that can’t let go of the thought this could be an arched-eyebrow exercise in parody. But despite Babak’s past in former country-sarcasm-deluxe band The Absentee, the sounds are too lovingly rendered, the hooks to massive and yet intricate to be anything but an earnest retracing of the steps throughout alternative guitar band song writing.

When the sarcasm is rightly planted, Woe opens up as a collection of near-perfect songs. From the opening guitar hook of 'Gone So Long' that plays as the affirmative big chorus, to the similar guitar crunch chords that follow in 'Uptight Casuals', the verses generally bounce along before a beach-styled wrecking ball chorus flattens the song, only for it to skip up and continue. There’s endless fun in the simplicity of the process.

Woe isn’t one-dimensional though. 'Uptight Casuals' is followed by the down tempo 'Distant Memory' and closes with the poetic 'Lynchstrumental'. The verse once more plods but this time to evident anxiety: “I’ll be pacing the halls again, I’ll be pacing the halls again.” This time when the big guitars kick in they’re not joyous, but vast, expansive and almost European, a shoe-gazed wash of noise, not a crackle or a smash. Shadow’s Secret Life also chimes in a Range Life infused recline, a dusk song that has it’s heart in America but softly illuminates London’s Old Street with suitable nostalgia.

Babak’s vocal hooks deserve note for the earworms they are. Delivered as part drawl part sigh they never the less always hit their targets. 'Aim Low’s boy-girls harmonies and two-minute give a Pastels-inspired reprise to the bombast that largely surrounds. As the up-step of 'Dead Night' then crashes in the flow of the album benefits from having the constant of an indie mumbler with an ear for a tune. Woe may be nothing but an infuriating reference sheet of American alt-awe-wielders for some, for others it will provide an endless stream of wondrously twisted guitar lines that, like all good music, can draw out the shades and temperature of its city of origin, no matter where the listener is placed.