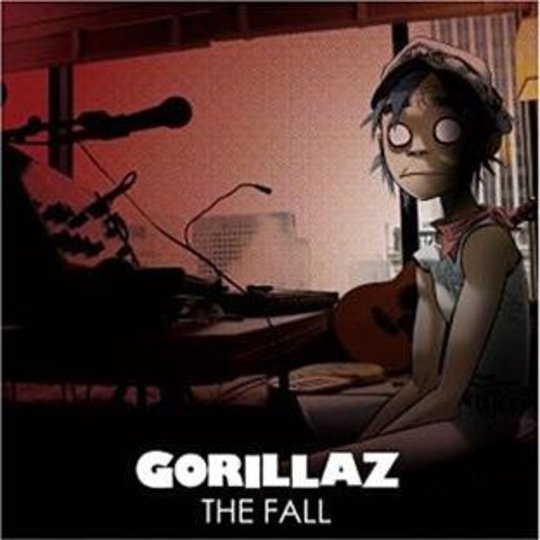 For the benefit of listeners who have until recently been living in a cave in Afghanistan or detained in the cellar by an over-attentive parent and thus managed to avoid the back-story, the cover of The Fall depicts Damon Albarn (or 2D, if you really must) in an anonymous hotel room. He’s alone apart from a few items of kit (acoustic guitar, Omnichord, couple of analogue synths), the peak of his stage-prop naval officer’s cap crumpled and forlorn and his bugged eyes, to borrow William Gibson’s phrase, “the color of television tuned to a dead channel”. Through the window behind him, another dawn is blistering over the skyline of another Midwestern city. It’s probably time to knock together a 'travelogue' album on the cheap and move one square closer to being out of contract with the inexorably sinking ship that is EMI.

Gentle reader, much as Plastic Beach and its accompanying Royal Variety Show finally convinced me that Albarn actually is the genius he’s been claimed to be for the last 20 years, I was initially unimpressed with his latest offering. Coming to The Fall expecting the sonic and melodic riches of a record that was five years in gestation and involved about a thousand collaborators was only going to yield disappointment, but even with this in mind early airings didn’t seem to offer much to hold on to, suggesting the possibility that if The Fall had ever been a good idea it hadn’t been well executed. Not for its dearth of 'songs', whatever those are: the absence of a ‘Country House’ from anything is always a bonus, and the fact that ‘Stylo’ is essentially five minutes of the same riff is an important part of why it’s such a great pop single. Just… what does this think it is? What’s it for?

The answer’s under Albarn’s roving amateur musicologist’s pith helmet. The author and occasional voice of The Fall is a bewildered European lost and lonely amid the relentless cultural and geographic vastness of the American hinterland and the unreality of his travelling circus. The album is a kind of field recording, a digest of sense-impressions: “the pinks and blues of Houston in the sun”, a snatch of ‘Wichita Lineman’ stuck between stations on the radio, the Gorillaz touring party re-cast as “little pink plastic bags blowing on the highway”. It’s Damon’s life in the bush – more accurately on the prairies and in the mountains, deserts and cities – of ghosts.

Musically, this locates The Fall roughly at the point where Kraftwerk’s “fahren fahren fahren” morphs imperceptibly into the “fun fun fun” to be had in California until Daddy takes the VW away: America from the perspective of an alien. Not that Kraftwerk ever sounded so world-weary. There are traces, too, of Negativland’s relatively unsung classic Escape From Noise – Negativland being perhaps the U.S’s quintessential home-grown aliens and having initiated the non-trend Albarn follows here for naming records after other well-known acts (and, yeah, we know that 'fall' can – and does – stand for 'autumn' and 'decline', but those titles! If the likes of ‘Hillbilly Man’ and ‘The Snake In Dallas’ hadn’t already tipped us off there’s ‘Bobby In Phoenix’, just in case).

Genius, as you know, is all about the detail. The backing vocal on ‘Revolving Doors’ – if you’re still struggling with the 'song' thing, this and ‘Amarillo’ offer consolation in the form of two of Albarn’s loveliest unfinished melodies – echoes the ersatz Native American chants Ennio Morricone dreamed up for Sergio Leone’s so-called Spaghetti Westerns, particularly The Good, the Bad and the Ugly. No, not the Queen. Short of being one of those Afghan Fritzls, you’ll know that these films took the moribund Western genre to gulches and creeks hitherto uncharted. They’re Westerns for people who don’t like Westerns. They evoke the emptiness, scale and melancholy of their landscape and characters with an economy and power that the collected works of Johns Ford and Wayne cannot touch. And they were visualised and scored by people from Italy.