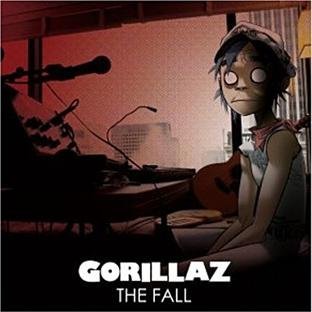 Damon’s life in the bush of ghosts.»

from montreal to vancouver via seattle, texas and toronto, over 32 days on their north american tour this autumn, gorillaz recorded a musical diary. the result is a collection of 15 tracks, some with vocals, some without, some combined performances and some solo. like an electronically influenced hip-hop dream, 'the fall' progresses effortlessly to form a surprisingly cohesive work of art. recorded on tour, on an ipad, this low-key album (originally streamed for free on the band's website) is the sound of damon albarn blowing trees and tweaking apps as the american outback rolls by his bus window. featuring songs like 'shy-town' and 'seattle yodel,' it's a wistfully spaced-out, subtly cheeky spin on the road-trip epic: easy rider via tron. albarn isn't trying to say much, but 'the fall' is pretty consistent, from the country-radio sampling dub of 'the parish of space dust' to the rust belt planet-rock of 'detroit.' the capper is 'bobby in phoenix,' an interstellar-blues sermon from soul great bobby womack: delta guitars and sad, sweet blips and beeps demonstrate that ipads can have feelings too.
description from www.roughtrade.com