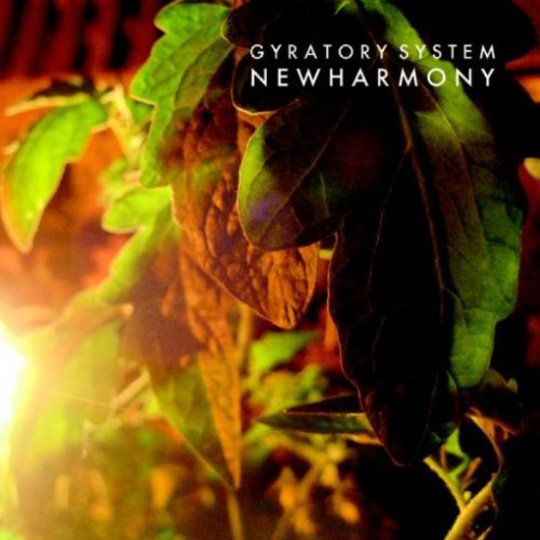 Lounging on Clissold Park a while ago, I was listening to a friend of a friend talk about the first time he tried ketamine. After working his way through a bag of magic mushrooms and some MDMA at the Big Chill festival last year, he took some of what he thought was coke to try and get himself straight(er), but didn’t realise what he had done was the tranquiliser popular with horses and the anaesthetist community. What followed were a few hours where our man found it difficult to grasp the basic laws of physics, or indeed his own consciousness. It was, he said, a bit much to take in. Although the K-hole is not renowned for its use gratuitous use of rave synths in a polyrhythmic style, after listening to New Harmony by Gyratory System I felt at least part of the way towards knowing what he meant.

The album opens in nice style with ‘Lost On The King’s Road’, which sounds a bit like someone took the instrumental middle part of ‘Narayan’ by The Prodigy and then got a little bit creative with some of the lesser-known plug-ins in Reason. At this point Gyratory System are not slow to switch up synth lines or beats, and there’s a pleasing sense that somewhere in the mix there may be real instruments at work, but so heavily treated as to render them indistinguishable from what is electronically generated. And then comes the nerve-shredding rave synths… ‘New Harmony’ and ‘Un-Sound’ are so filled with high-pitched synths looping in off-kilter patterns you will curse your ears for their wide-frequency detection. Like the worst kind of indulgent guitar solos, they completely drag focus away from any momentum being built in the track. It’s clear what GS are trying to achieve, and the blend of a full-on rave assault with more cerebral elements like the mysticism associated with jazz and African rhythms is a noble mountain to climb, but contextually it all feels like all the different elements are fighting against each other.

‘Seven Dials’ is noticeably better, by the simple addition of a consistent bassline and 4/4 beat, the kind of marshalling presence which could pull a lot of the sloppiest parts of New Harmony back on track were it not conspicuous by its absence. By the time the ambient noodlings of ‘I Must Create A System’ roll around the album has again tested the listener’s patience with ‘Pamplona’ displaying exactly the same problems as ‘New Harmony’ and Un-Sound’, which is a real shame as its very good, and wouldn’t seem a bit out of place if it was dropped right in the middle of something like Aphex Twin’s Selected Ambient Works 85-92. GS, like Aphex Twin, are part of a long line of British electronic acts which aim to move the brain more than the feet, but aside from ‘I Must Create A System’ GS look a long way short of the quality of peers like Plaid, U-Ziq or any other experimentally-minded electronic act you care to pluck out of the air.

What they do achieve is to sound quite like Max Tundra but without any of the pop-sensibilities which makes him worth a punt now and again. The only other track worth mentioning on the rest of the album is penultimate number 'Gargoyle', which sounds a bit like a free-jazz interpretation of ‘The Becoming’ by Nine Inch Nails, but a lot less wonderful than such a singular description in the English language deserves. I really dislike putting the boot into an album wholesale, but it’s been a long time since I’ve heard a record that’s made me think so often who it’s for; and after several listens all the way through, I still don’t know.