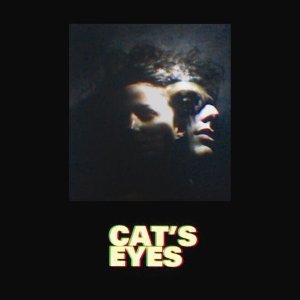 It’s hard to believe a member of The Horrors could have shaped such a powerful piece of work as Cat’s Eyes.»

rough trade exclusive with a bonus 5 track cd of demos including two tracks 'in ecstasy' and 'snow drift' which don't appear on the album. cat's eyes are a duo formed by rachel zeffira, a canadian opera soprano and classical multi-instrumentalist based in london, and faris badwan, the singer from british psychedelic-rockers the horrors. in the collision of their two very separate worlds, something magical has come into being. cat's eyes eponymous debut album is a romantic pop masterpiece fit to dine at the same table as mid-'60s productions by phil spector, joe meek or shadow morton, but with a fiercely modern, experimental premise, which constantly leaves you wondering just what you're listening to, and how on earth it was created. the album was recorded at realworld studios near bath with producer steve osborne. all cat's eyes artwork is designed and photographed by chris cunningham. cat's eyes first live appearance took place in december, amid some secrecy, at st peter's in the vatican, where they performed a reworked version of their song 'i knew it was over' during an afternoon mass attended by several high-ranking cardinals. this set of stunning orchestral pop love songs that recalls ennio morricone and julee cruise will still be listenned to in thirty years time - it's that good.
description from www.roughtrade.com