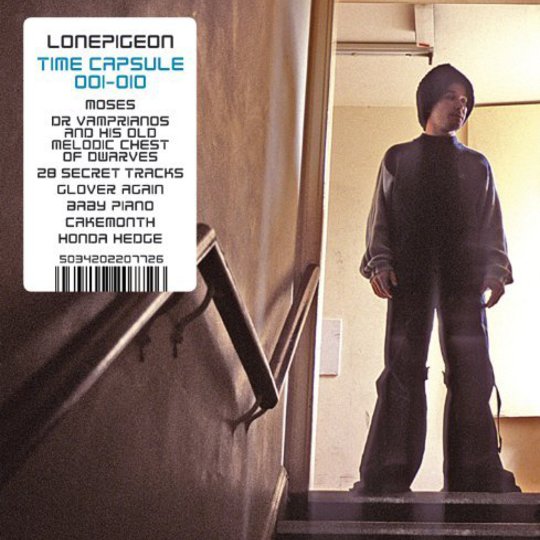 The problem with musicians releasing box sets of everything they’ve ever recorded is that, as much as it guarantees the inclusion of the artist’s finest work, it also means that there’s a placed reserved for any guff he’s come out with over the years. There’s a tendency, with comprehensive collections like Time Capsule, to value quantity over quality. And what’s more, this problem is exacerbated with an act like Lone Pigeon: five of the seven albums included here have more than 20 tracks, with the duration of one disc exceeding the 76-minute mark. Knowing this, it’s something of a daunting task to sit down and listen to the whole of Time Capsule, as you wonder, 'What’s wrong with a healthy cull?' After all, it’s not like OK Computer would have been better if it was twice as long.

The musical marathon of Time Capsule starts with Moses. This record was made in 1997, at a time when Lone Pigeon was better known as Gordon Anderson of The Beta Band. It certainly isn’t a straightforward listen, with many tracks barely longer than a minute. The overall feeling is of a pirate radio station tuning in an out, with snippets of delicate acoustic guitar and absent-mindedly mumbled vocals fading in and out of weirdly distorted folk ballads, muffled Seventies rock anthems and splatters of atonal electronica. Very occasionally, the album manages to maintain a signal for long enough to let a track like ‘Rocks’ expand from quietly relentless chord strumming into eerily lush harmonies and dreamily overlapping vocal melodies. But these moments of respite are rare in what is largely a collection of ideas for songs, rather than songs in themselves.

Disc number two is called Dr Vamprianos And His Old Melodic Chest Of Dwarves, which should make it pretty clear that you’re not going to be hearing a pop song any time soon. This takes the blueprint of Moses to further extremes. By and large, the ideas are expressed a little more confidently. The vocals are clearer and the production is crisper, with nightmarish organs and spoken-word samples adding a few more splashes of colour to the folk brainstorm that emerges from Anderson’s manically shifting attention span.

Compared to the first two discs, 28 Secret Tracks is a far more traditional album. A number of the tracks (all of which are untitled) are the sort of guitar/vocals folk pieces that are the bread and butter of the Fence Records label that first released them. The mood is much darker than before, and just as unsettling. The difference here is that this discomfort comes more as a result of Anderson’s bare and bleak arrangements than his invasive experimentation. It feels more honest, and has much in common with last year’s excellent Cold Seeds album – another Fence Records project which included Lone Pigeon’s brother, King Creosote.

The fourth disc, Glover Again, is back to being more hyperactive, in the way it jumps between styles. The songs themselves sound more complete this time though: instead of being snapshots of songs that drift in and out of one another, they stand up on their own. The problem here though, is that while individual tracks are some of this collection’s finest (the desperately vulnerable piano piece, ‘Cold Mountain’, and the aching ‘Unknown Yesterday’ are tear-inducing treats), Glover Again neither clicks together as a comprehensive work nor overwhelms with the sheer range of its imaginative ideas.

With Baby Piano we pass Time Capsule’s halfway mark, with an album that sees another departure for Lone Pigeon. As the name suggest, the main difference here is instrumentation, with feather-light piano melodies forming the bed for Anderson’s most sensitive and tender body of work yet. The second half of this disc reverts back to guitar ballads, but you get the impression that Anderson has learned something about expressing himself humbly, emotionally and beautifully. If the earlier albums were too anarchic and disjointed, then there’s a lot to love about the delicate simplicity of Baby Piano, though Anderson hints at his chaotic past work with the sprawling lo-fi prog coda of ‘Radwoods’.

Cakemonth returns to the detuned radio format, with odd moments of Sixties pop, piano-rock and stripped-back power ballads clouded in white noise, all brought to abrupt, stuttering ends. It’s as though Anderson has gone past even attempting to rationalise the contrast of the astounding range of styles he flirts with. The most notable track here is ‘Juicy Little Flies In The Highlands’, which at 15-minutes long, sounds like a medley of all of the barmiest bits of The White Album. You could say it sounds like the ramblings of a mad man, but that just makes it all the more fascinating, sparking the same impulse the makes motorists slow down as they pass accidents on the motorway.

By the time you reach Honda Hedge, you more or less know what to expect from Lone Pigeon – i.e. pretty much anything. The strangest thing about Gordon Anderson though, is that he could quite easily be a songwriter who writes folk music that is accessible, but still authentic and artistically valid (see ‘Waterfall’ on Honda Hedge and ‘Marcus’ Song’ on Dr Vamprianos… for proof). But for some reason he’s decided against it, instead cramming his albums with surreal interpretations of a countless number of genres. It’s hard to know how far Anderson’s tongue is rooted in his cheek when he does this, but you get an inkling from the fact that the last track on Honda Hedge is a four-minute anecdote about a man shitting himself.

On a box set this lengthy, there is always going to be filler, and Time Capsule is no exception. But what’s clear from this collection is that Lone Pigeon couldn’t possibly be this prolific if he wasn’t absolutely overwhelmed with ideas. Musically, many of these ideas fail, but a hell of a lot of them work or, at worst, show a great deal of potential. And to be honest, you’ll always get a kick from listening to a musician so surreal, subversive and uncompromising.