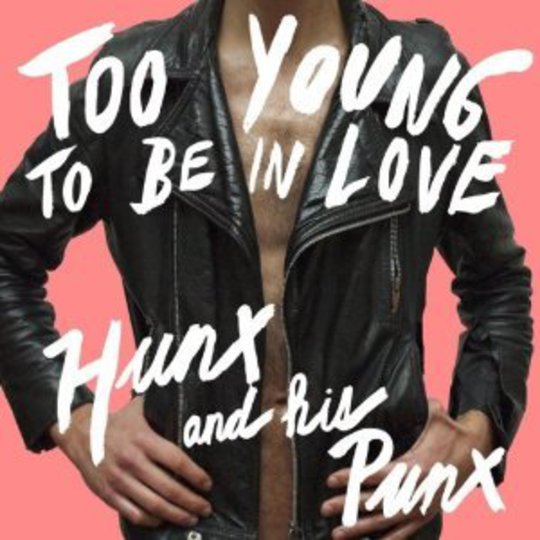 Although Hunx And His Punx are not, by a yardstick most people would use, a ‘big band’, the Oakland quintet have become demonstrably better known in the 18 months since Matador Records sublabel True Panther Sounds released Gay Singles, an LP comprised of 45s released in 2008 and ‘09 on various bedroom indies. This has been bolstered by small acts of moderate blogworthiness, such as having one of their songs soundtrack an ad for spectacles, and the penis of Hunx himself substituting for a microphone in the ‘adult’ version of Girls’ ‘Lust For Life’ video. Add in the innate tunefulness and burrowing earwormery of the garagey girl-group-pop songs on Too Young To Be In Love, their debut album and who knows – some legitimate success might fall into their lap in the near future.

If this happens, it will plant a flag for the queer aesthetic in the domain of indie rock, which has traditionally talked a good game about ‘ambiguous sexuality’ and suchlike, but hasn’t actually offered that many notable gay icons in its history – at least, not if one is pondering percentages. I’d also expect Hunx, aka Seth Bogart (I’m not going to try and find out if it’s his real name or not, in case it turns out that it isn’t), to catch some heat from some quarters about quite what his portrayal of gayness was bringing to the table. That is to say, he’s a bit like a rejected John Waters character made flesh. He has a highly effeminate voice, a pencil moustache and a predilection for wearing lurid undergarments, for example on the sleeve of Gay Singles. In the day he co-runs a combined hair salon and vintage clothing shop called Down At Lulu’s.

Still, as much as he clasps hysterical gay stereotypes to his bosom, he also subverts them. In the video for ‘You Don’t Like Rock’n’Roll’, his second single, he upbraids his boyfriend for wanting to listen to “Liza… Judy… Babs?” instead of the Ramones. Equally, Too Young To Be In Love upsets ingrained expectations: in the early Sixties, the era mined here by the Punx (four girls who have been in bands including Shannon & The Clams and Loli & The Chones), an American man singing about his boyfriend and same-sex heartbreak would have risked actually breaking the law. Now this is no longer the case, gay culture appears to have little room for the sort of music the Punx play. Which all makes for the always-helpful Unique Selling Point, as well as making Hunx slightly more interesting to talk about than, say, The Black Lips, or similar band of dudely dudes who like to call people "faggots".

Not that the ten songs on this album wouldn’t be good if it was four boys fronted by a boy singing about girls, you understand. Lyrically, Hunx’s brushstrokes are broad, so as to generate as much empathy as possible – in the style of vintage r’n’r balladry. Beaus take off without kissing the singer goodbye, and die in unexplained circumstances (‘Lovers Lane’, with backing “oh-oh-oh”s giving a most agreeable doowop feel). Boyfriends return to town to save Hunx’s reputation (‘He’s Coming Back’, which is smothered in wheezy garage organ and is a fairly shameless rewrite of ‘My Boyfriend’s Back’ by The Angels). Bogart – who must be well into his twenties at least, given that he was a member of filthy dance-rap ensemble Gravy Train!!!! almost a decade ago – laments how his youth causes relationship ructions (‘The Curse Of Being Young’ and the title track). What or who could he be doing while he’s out of my sight? What was I thinking trying to see the good in that bastard? And so forth.

Sonically speaking, Hunx And His Punx have hit on an essentially ‘vintage’ sound without being terribly authentic. Although they’re obviously indebted to the Shangri-Las and Phil Spector’s cabal of girl groups, the Punx play it somewhat rougher than that in the main. There was a certain crossover point with garage and girl-group back then, but these were exceptions, not prevalent. If Jay Reatard (a friend of the band) was still alive, he could have purchased ‘Bad Boy’, the punkiest thing on here, from the band without anyone suspecting it wasn’t his work. ‘You Don’t Like Rock’n’Roll’ notwithstanding, the members’ collective liking of rock’n’roll is obvious – they care about it enough to want to do something a bit different with its base elements, and not just mindlessly go through the motions. Or, to coin a phrase, play it straight.