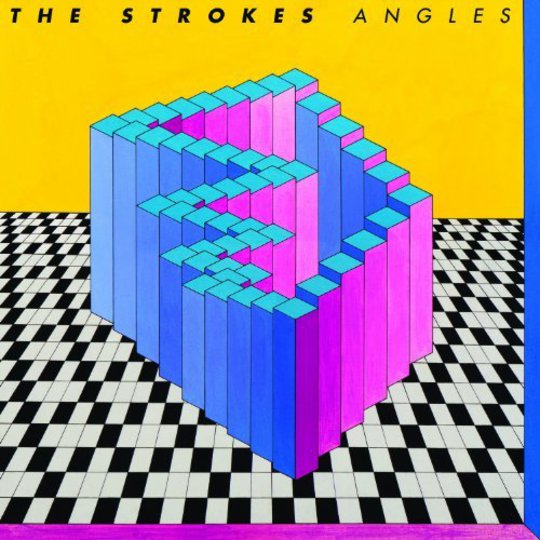 Like the Allied invasion of Afghanistan, The Strokes more or less achieved everything they set out to in 2001, only to see the world they’d notionally saved turn increasingly hostile and indifferent. Fortunately there’s quite a big difference between an unpopular land war and being in an indie band - Is This It did quantifiably jump start a moribund alt.rock mainstream, and for that Julian Casablancas and co still enjoy considerably more goodwill than the average occupying Western power. But since quote-unquote saving us, there has, to a greater or lesser extent, been a tendency to wonder exactly what the point of The Strokes is now. You get the impression that the band themselves have wrestled with this: Angles is only their second album in eight years, a stretch marked by the laboured, overlong First Impressions of Earth and numerous underwhelming side projects.

The Eighties obsession sporadically hinted at throughout the band’s career comes to something like its head on Angles, an album which manages to suck everything from Sly & Robbie to Talking Heads to Journey into its cheerily chaotic orbit. ‘Machu Picchu’ kicks things off with a lolloping white reggae groove, nonsense lyrics, bongos, a gratuitously jangly riff and weirdy falsetto backing vocals; the success of the track is in its orchestration – two years in the studio sounds about right to actually get all these ingredients to work together, but work they do, an impressive build from faux-slinkiness to peppy, buzzing wall of sound. That ability to pull a gem out of the nonsense is one of the album’s more appealing traits: ‘Under Cover of Darkness’, for instance, does not start promisingly, Casablancas’s untreated vocal buzzing and tumbling at a distinctly midge-like pitch. But as the busy little riff in the background grows gradually louder and louder, it comes to mind that something good must be on its way, and so it proves, Casablancas absolutely walloping us with that throaty, simultaneously yearning and loose chorus that only grows in stature on a second coming bedecked in raggedy high pitched backing vocals.

The Cars-ish ‘Two Kinds of Happiness’ is basically slightly nervy drivetime rock and will probably not delight those whose love of the Strokes is based on them being the breezy antithesis of such things. But then, it’s very much a Strokesified version of AOR, still lo-fi and somewhat obscure in intent - it successfully serves as both homage to and subversion of the form. Ditto the weirdy robot rock of ‘You’re So Right’, the loopy, Byrne-ish disco of ‘Taken for a Fool’, the New Romantic-esque ‘Games’, the showtune-ish ‘Gratisfaction’, the gothy clangour of ‘Metabolism’. The only track that sounds like it might have issued from ‘classic’-era Strokes is ‘Life is Simple in the Moonlight’, which slots in just fine by dint of being impossibly good. It's the lambent, yearning ballad that the first two records perhaps missed, Casablancas’s vocals restored to their ordinary distorted detachment, but paired with the most eloquent, moving lyrics of his career (“So we talk about ourselves and how/To forget the love we never felt”).

Angles doesn't feel like an over-indulgent record, nor one that speaks of a dearth of ideas. It’s the crisply chaotic departure from the ice cool monochrome of their imperial phase that First Impressions… should have been. It’s The Strokes trying on a load of outfits to see what fits and personally, I think a lot of them fit well. I know others have differed, suggesting the record is a joyless affair, but to me it patently sound like heaps of fun, a goofy dressing up party with an Eighties theme. How to reconcile this with the fact the band have said the recording was so miserable? Well, obviously such feats are not unheard of, but I do wonder if Casablancas’s eccentric working methods - absenting himself from the studio in order to force the others to take a more active songwriting role, recording his vocals elsewhere and emailing them in – could have been the key. Does it really matter that Nick Valensi had a terrible time, if the music’s up to scratch and the singer at least sounds like he enjoyed himself (for once)? And after the plodding Phrazes for the Young, shouldn’t it be a source of cheer that Casablancas decided to loosen the reins a bit and duck out of the music? In any case, just because the hosts are grumpy, it doesn’t mean the rest of us can’t enjoy the party.