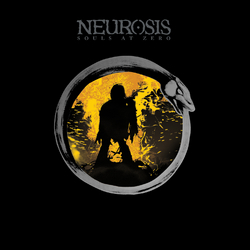 Souls At Zero is an essential piece of work for any curious and open-minded metal fan, a far from antiquated gem that is as relevant and riling as ever.»

long out of print, the band now re-issue 'souls at zero' with three additional demo tracks, updated art and an o-card sleeve as part of the reissue series. neurosis's 1991 art-thrash classic, 'souls at zero', was a strange bird even at the time of release. leaving behind their more conventional punk roots, the band began incorporating samples and electronic textures, as well as a marked tribal folk influence, with their still-monstrous rock. while a legion of atmospheric metal groups including tool, isis, and pelican have since traveled the road neurosis paved here, it was a virtual wilderness at the time. hypnotic and menacing songs like 'a chronology for survival' build a sense of theatrical dread with repeated spidery guitar lines and cold washes of synths, while 'sterile vision' and 'stripped' flirt with medieval acoustic folk. the injection of space and silence into what had previously been a more standard hard-rock sound changed neurosis irrevocably, but that's not to say they didn't leave any room for pounding, industrial-charged heaviness. in fact, the tribal-inflected rhythms on souls at zero may well be its defining trait, as the bursts of power hit that much harder when they come less frequently. mysterious, mesmerizing, and eerie, 'souls at zero' is metal for modern druids.
description from www.roughtrade.com