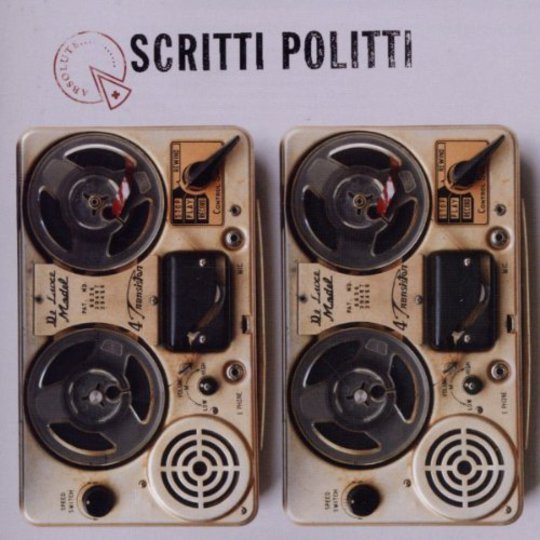 In an attempt to clear up the misconception that Scritti Politti were just another group of fey hair-sprayed pretty boys making shallow and shiny soul pop, there's been a paradoxical tendency to exaggerate the notion of Scritti as collective of art school Marxists and disjointed post-punk squatters who had a mid-career epiphany and decided to infiltrate the mainstream. The truth is that Scritti didn't exist in their original form for very long at all and they've covered more ground than synthetic soul since then, another misconception which Absolute, this new 'career spanning' compilation does a decent job of putting to rest.

There's a reason for those inverted commas, however, and that reason is the complete absence of anything from Scritti Politti's most recent album, 2006's Mercury-nominated White Bread, Black Beer. However, as is the norm with such compilations there is the addition of two new tracks; aside from the harmonious opening incantations of “Bump-badumpah-dum” 'A Day Late & A Dollar Short' is a fairly modern-pop offering, with a Goldfrapp-esque buzzing synths and vocodered backing vocals. It's much more vibrant than the occasionally dozy-sounding White Bread, Black Beer material. Meanwhile the low key melodies and clicking beats of 'A Place We Both Belong' have the laptop intimacy of Gartside's most recent offerings, but it makes for too innocuous a closer given the uniformly high quality material that precedes.

Showing scant regard for chronology, the singles from Cupid and Psyche 85 rightly take their place upfront as the crystallisation of Gartside's 'deconstruction' pop vision (and it was solely his having shorn the group of its other members), but more importantly as fantastic pop songs bearing a contemporary American R'n'B influence. It's all very much the sound of the studio-as-an-instrument, music that sounds like it couldn't exist in any organic form prior to recording and the sheer busyness of the interlocking drum patterns, squelching bass, sampler hits and titular backing vocals on 'Hypnotise' sound thrillingly unpredictable. It's easy to see why the likes of Max Tundra and Cornelius cite Scritti Politti as a major influence. Compilation opener 'Wood Beez (Pray Like Aretha Franklin)' excels with the same elements, but has a gorgeous soft focus chorus with Gartside's vocals ascending on clouds of vaporous synth strings. Gartside's bottomless well of melody prevents him repeating himself on 'Absolute' and 'Perfect Way', which would later be covered by Miles Davis. 'The Word Girl (Flesh and Blood)' meanwhile is a glossy update of the white reggae lope which had been a component of Scritti's sound since their inception.

For all that Gartside saw these songs as part of his 'deconstruction' philosophy it's very doubtful that many listeners would realise this. Nonetheless, even without Simon Reynolds to tell us all about the thought process behind these hits, they remain excellent, if rather of their time, pop songs.

1988's Provision was very much a continuation of Cupid and Psyche 85's sound, but with a decline in songwriting quality. 'Oh Patti (Don't Feel Sorry For Loverboy)' is ultra cloying, with verses that wouldn't sound out of place in a Disney animation where as the much better 'Boom! There She Was' is a more svelte relation of 'Hypnotise', with less disruptive beats, but superficially at least as much of a sugar-coated treat. The 11 year wait for follow-up Anomie and Bonhomie resulted in a big musical leap with a heavy hip-hop influence. 'Tinsletown To The Boogiedown' comes across as Mos Def and Lee Majors featuring Green Gartside, such is his marginal vocal input, but musically it's still Scritti Politti. Given their past use of samplers and programmed beats, hip-hop is actually a pretty natural step and it works to ominous effect here. The same goes for the dub-like 'Die Alone', whereas 'Umm' and 'Brushed With Oil, Dusted With Powder' see Scritti utilise guitar again, between rap passages on the former and in blissful nocturnal balladry on the latter.

Scritti Politti displayed a knowledge and aptitude for soul and even hip-hop as early as their debut Songs To Remember, three tracks from which are nestled towards the back end of this compilation. The delightful brisk strum of 'Jacques Derrida' culminates in a rhythmic breakdown and some rudimentary rapping from Gartside himself, where as the irresistibly phat and funky clavinet of 'Asylums In Jerusalem' is cribbed directly from Stevie Wonder. The defining track from that record, and turning point for Scritti was the single 'The “Sweetest Girl”;' its keyboard and crisp beat are sensuously gleaming as the reborn Gartside's honeyed pipes sing their paean to the impossible picture of female perfection over guest Robert Wyatt's rhythmic piano playing. Here its sleek sugary pulse is preceded by the metallic downstroke guitars and awkward bass lope of 'Skank Bloc Bologna' in order to emphasise their stark change of direction.Both songs are thrilling for different reasons, yet there's a similarity in their rhythmic underpinning, the difference being the transition from instability to mechanical precision.

The dispersal, in two clusters, of the career high-points provided by Songs To Remember and Cupid and Psyche 85 ultimately makes for a slightly distorted picture of Scritti Politti's career, but also makes Absolute a more even listen, even though the slightly weaker moments in between are far from terrible and are more often than not fascinating (a pointless cover of 'She's A Woman' with Shabba Ranks aside). Absolute works as an overview of one the UK's most bold, daring, intelligent and unique pop groups as opposed to that of bold, daring, intelligent and unique post-punk pioneers and taken at a purely superficial level it remains a collection of mostly immaculate pop music.