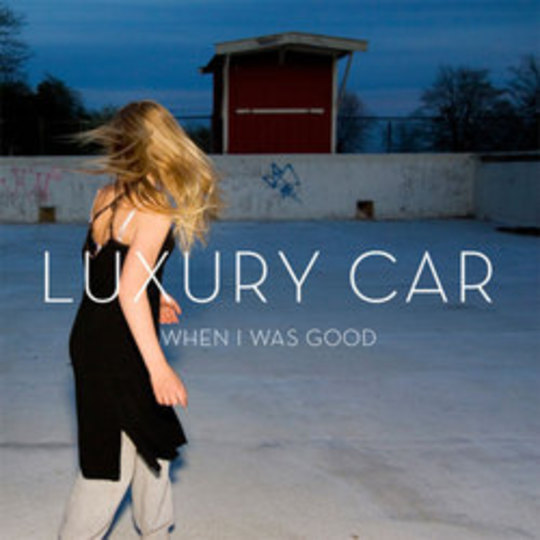 Oh it’s a crushing disappointment that greets you upon ‘Hit By A Car,’ opening of Luxury Car’s When I Was A Good; a grating nag that reveals itself too early, cutting bluntly through the distorted twinkles and crackles that shoot whip-like across its twilight skies - and it’s a crying shame.

The work of Edinburgh’s John Robertson, recorded with brother William, the basic blueprint for this his second LP is faultless; great waves of fully-flush dream-pop act almost tidal in their movement, withdrawing through ‘Discrete Packets’ and ‘I Play The Guitar’, only to return anew on the album’s title track and centre-point. Their boundaries are sharpened ever so slightly with light tinctures of glitch percussion and lingering static, and invested into this are lyrics of great solemnity. There’s no hint of a wince in lines such as “now every waking moment’s a joy, my joy is unalloyed” and an unashamed “I love my life” on ‘Discrete Packets.’ It’s similar to the stern noir-pop revivalism of Hurts in a way, yet there’s more warmth behind Robertson’s earnest platitudes, and more to exercise the ear with in the range of synths and electronics he has doing his bidding around him.

It certainly doesn’t prove to be all for nothing, but amidst this carefully orchestrated, lovingly crafted record lays an uncomfortable truth that presents itself far too early on and only gnaws deeper on further listening. It’s Robertson’s voice; pitched at a kind of sincere Scott Walker croon, his gently burring baritone sadly fails to match the sweepingly pixelated panorama of his own creations. It’s not that he has a bad tone; final track ‘Shame’ is stripped back completely to reveal his naked vocal and works terrifically well, the Scotsman supporting himself with only the deep timbre of a heavily plucked acoustic guitar to evoke a rich emotional purity. Troubles come when trying to replicate that against the towering glitch-pop elements of the preceding six tracks, and they come right from the off when he gamely flounders amidst ‘Hit By A Car’s electro-storm of sound before sinking like a dead weight below its surface. Likewise, ‘Discrete Packets’ finds him on steadier footing but then as it elegantly begins to shimmer towards its finish, Robertson sounds too close, his voice too flat and out in front, not as though he’s pushing back his lush surroundings but as though those same surroundings are ushering him head first towards us.

The odd lyrical clunker doesn’t help either; this is an album written with a direct meaning, and for the most it works fine, but there’s instances, such as on ‘When I Was Good’ where he sings with overwrought seriousness “when I was good and I could drink a beer and sleep for a whole night”, that you long for something a bit deeper and more eloquent to match the sophisticated re-imagining of Eighties industrial pop. Of the electronically-charged efforts on here, it’s ‘Hinderland’ which holds up best both vocally and instrumentally, its Gary Numan-recalling minimalism the darkest component of an album that aims to positively gleam with opulence.

That it doesn’t is more of a pity than an annoyance. Robertson isn’t far away on When I Was Good, with a clearly defined sound and a carefully constructed album of emotional peaks and troughs for him to ride over, it’s just a shame that vocally his luxury car of choice for the journey appears to be a Delorean, an undeniably powerful but ultimately incompatible vehicle – at least for this particular venture.