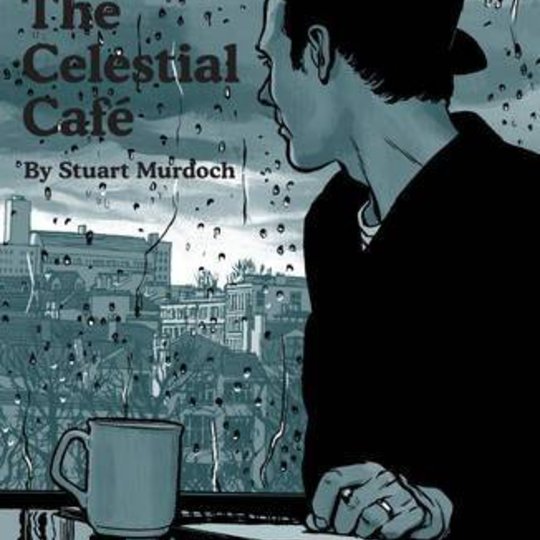 By the time Stuart Murdoch came to write the diaries that makes up this collection (covering 2002–2006), he’d already done pretty much everything that established the iconic status of his band, Belle & Sebastian. In 2003, the Fans Only DVD pulled together interviews, live footage, and the (mostly) Murdoch-scripted films, which could have been the last word in self-mythologization: a rare biopic that transcends the medium to say something about its time (and/or retro-fixated sub-culture), like Grant Gee’s Meeting People Is Easy or Todd Haynes' Velvet Goldmine & I’m Not There.

Until now, the best resource for facts about a band who often blurred the line with their own fictions has been Paul Whitelaw’s This Is Just a Modern Rock Story (2005), and in a sense The Celestial Café doesn’t challenge that, or attempt to settle scores, so much as it politely sits alongside it occasionally casting a glance backward at the various Stuarts of the past, filling in the gaps with much more elegant prose. Problem is, it doesn’t take an acquaintance with said-biography to get the impression that 2002–2006 were relatively sterile years, which is why you might be wondering – as a fan – if you really want to see the emperor without his clothes.

Between 1995 and 2000, Belle & Sebastian released four albums and four EPs that daringly evoked The Smiths in their iconography, although Felt, The Go-Betweens, and Tindersticks were better reference points. Murdoch’s songs were perfectly realized narratives from a Bohemian demi-monde where distinctly odd characters negotiated the pressures to conform in their sexuality, fashion-sense, politics, and spirituality. Other urban tribes existed in the B&S world, but the B&S Hero / Heroine was too awkward to fully embrace Gaydom or God-bothering; plus, they liked "…The Fall and Manfred Mann…", boxing, football and Nick Drake. Until B&S came along, these were the people who fell through the cracks, but suddenly there was a singer articulating everything they felt, with smart wordplay and a subtle line in the surreal bon mot ("…she tried to flag down / an aero-plane / I suppose she needs a hol-i-day…"), all of it suggesting the epiphanous within the mundane.

Murdoch aside, B&S were masters of counterpoint, recorded mostly live, and even within Britpop’s creative arms-race, stood apart by achieving a rich sound without overly polished production. This was the second thing that made them genuinely important; the third being their relationship with the audience, in which there was a wistful awareness of fantasy, making for a love-affair second only to that of Radiohead and their fans. As Murdoch hints early in The Celestial Café, B&S became part of a global community before most (less literate) bands. When Pete Waterman complained about B&S stealing the Brit Award from his gruesome paedo-pop puppets Steps, he demonstrated the deep evil of The Industry by failing to recognize that 1) B&S deserved the support of a voluntary grass-roots movement; 2) those supporters were, by definition, Early Adopters (of a band, a lifestyle, a new medium) and hence the very antithesis of the sick clones he’d make us all. It’s easily forgotten, but the Bowlie Weekender B&S organized (to celebrate their Brit win) evolved into the institution that is All Tomorrow’s Parties, whereas Steps became...?

Anyhow. The years 2002–2006. What happened next is straight out of Todd Haynes: Sebastian lost Belle, but found Jesus. Having stood for 'classic songwriting' and modest ambitions, his band went global, and although they’d always used synths and stylized vocals, these came to the fore on an album that managed to be early for the Eighties revival. Thing is, Dear Catastrophe Waitress (2003) featured some of the band’s best songs, and while it’s easy to malign the 'new band', and the 'new Stuart', as soulless or cynical, the reverse is true. What started with an involvement in community groups (during the years Stuart was sick, pre-B&S) became a sincere, but also searching, faith (after Isobel left). If you’re interested in that story – and you should be – then it’s one of the major strands here. As for DCW, it wouldn’t have been any good if the band hadn’t loved the songs, and they clearly did.

Elsewhere, we get some cute conversations with fans, encouraging them to write quirkily about what’s sexy other than sex; we get a list of Stuart’s 100 favourite films that’s more useful than any number of Uncut features; we also get a list of crucial influences that you kinda-had-to-be-there-for (some of them), but are fun to track down, with a few Rosetta Stone moments (The Railway Children! Of course!). Unlike the (frankly embarrassing) Mark E Smith autobiography, Stuart turns out to be even more like your mental picture than you hoped, with some neat twists – he dreams about auditioning Amélie for his band (she always was a B&S character…); he’s not-quite-famous-enough at festivals, and has to scam his way into meeting Christina Ricci, or dancing onstage with The Flaming Lips; he’s such a veteran that when he runs into Courtney Love, he gets to remind her they already met, when he was a lowly roadie.

If you want to know how Stuart felt about Isobel, you’re in the wrong place; if you want to know about the rest of the band, likewise. On the other hand, the book does offer some teasing keyhole glimpses into the God Help the Girl project: conceived in 2004, it always seemed like Stuart needed three women – or a dozen – to replace Isobel. As the diaries show (see May & June…), he wanted to get under the skin of the lonely girls he idealized, more than ever before, and it’s a shame that a five-year project seems to have come less close than almost any B&S song you care to name. It’s partly due to that project that B&S might feel like a band whose glory days are over, but what The Celestial Café offers, instead, is an admirably altruistic outlook from someone who gets (as Jean Baudrillard says) 'What comes after the most beautiful sunset, or the most beautiful girl, you’ve ever seen? The next most beautiful sunset…'

Ultimately, it’s more than worthwhile: like Fans Only or Modern Rock Story, you’ll find yourself playing the whole back-catalogue to accompany this, and realizing just how many songs you love from the later period, that the diaries cover. Chances are, it’ll work the other way: you’ll come back to this next time you’re having a Belle & Sebathon, too. Bring on the next volume!