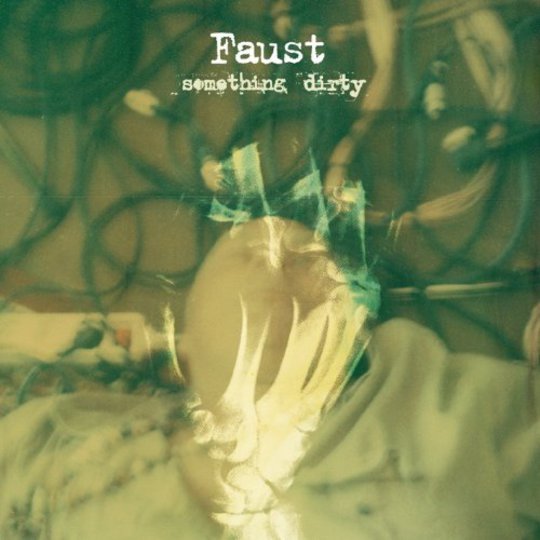 Who are Faust? Explaining the genesis of these krautrock legends would take up reams of pages at this point in time, but here’s the most pertinent part in regard to their recent history: there are now two bands named Faust, both containing members from the original lineup of the group, who operate entirely separately. In 2010 the 'other' Faust release a record titled Faust is Last, which featured founding member Jochen Irmler. This album, titled Something Dirty, is a version of Faust put together by original members Jean-Hervé Péron and Zappi W. Diermaier, who have recruited erstwhile Bad Seed and Gallon Drunk member James Johnston and his wife, Geraldine Swayne. At some point these two bands will no doubt come together and the universe will implode, leaving behind a copy of The Faust Tapes spinning away in perpetuity.

There are subtle musical ties to previous incarnations of Faust here, little traces of the scratchy pop of ‘It’s a Rainy Day, Sunshine Girl’ from So Far, or the wayward experimentation of ‘Meadow Meal’ from Faust. But Faust has never been a band that reaches back into its history to flinch ideas, and there’s no wholesale trading off past glories here—this is yet another chapter unfolding for a group that remains permanently in flux. It begins with the surprisingly straightforward ‘Tell the Bitch to Go Home’, which is built around great slabs of industrial organ noise and a compellingly dynamic groove. It’s not hard to hear Johnston’s influence in those stabs of organ, but there’s a more sinister undertow as well, principally through a great surge of noxious samples constantly bubbling just beneath the surface and threatening to overwhelm the track.

The two different sides of this version of Faust can be keenly felt in the transition from that track to the following ‘Herbststimmung’. This song is stacked up from quiet steel drum ambience that keels over into discordance and then ebbs and flows into light and dark passages, ultimately finding form and peculiar function via some loosely slung together drumming. It’s not a million miles away from the sea shanty beauty of the Dirty Three at their peak, where a delicious drunken wooziness is imbibed deep in the grooves of the track. Like most Faust work, there’s no particular pattern that Something Dirty clings to, almost as though the band hit a reset button on the completion of each song and tried to un-learn everything that came before.

So we get fragments of spoken word muttering across the title track and ‘Thoughts of the Dead’, which offer vocal passages that match the abstraction of the music underneath. Then we get more straightforward vocalizing from Swayne on the standout ‘Lost the Signal’, which plays out like a doomy 3am nightclub lament that wouldn’t sound out of place on a Gallon Drunk record (see: ‘You Should Be Ashamed’ on From the Heart of Town to draw a direct lineage from Swayne and Johnston’s prior work to this track). Elsewhere, there are curveballs thrown at the listener with every passing move, from the tawdry low rent feel of ‘Invisible Mending’ to the dislocated grooves of the two-part ‘Dampfauslass’. This is Faust toying with their audience, willing them to indulge every capricious whim that’s shoved into their faces.

As such, this is pretty much business as usual for them, despite the fact that this bears remarkably little resemblance to anything that’s come before in the Faust canon. This is a group that’s always been about defying expectations whilst running down little humorous cul-de-sacs and then flaying off great chunks of gray matter through a glowering roar of cacophony. Anyone looking for all of the above is not going to be disappointed by Something Dirty, which contains more than its fair share of mischief and mayhem. Crucially, it’s in keeping with Faust tradition, but it always looks forward rather than back. They even manage to plume great billows of new life into their sound when drawing on the Dada-esque cut-ups they’re known for, and the welcome contributions of Johnston and Swayne add surprises that won’t leave anyone listening to this with any idea of how it’s going to pan out. This certainly makes it an uneven listen, but longstanding Faust watchers would hate to hear anything to the contrary coming from this or any other version of the band.

Who We Were And What We Meant By It