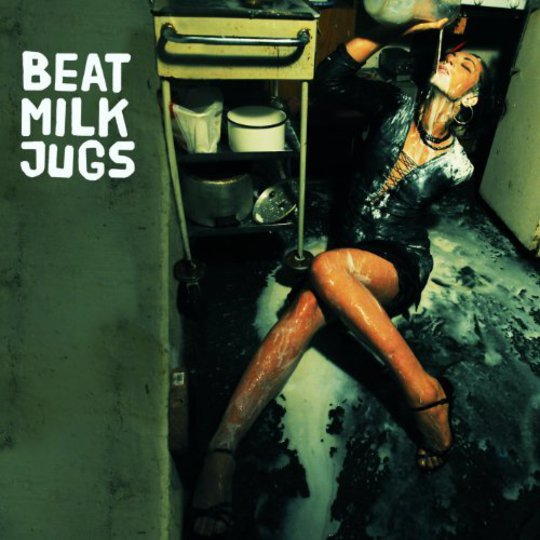 I think if I was on drugs I’d enjoy this record a lot more.

As you might have guessed from the title, 10 Years of Hangovers is predominantly a nocturnal affair. It’s loud. It’s in your face. I can envisage the industrial rhythms starting a fight with you in a derelict factory at five in the morning and then making a necklace from the teeth freshly knocked out of your skull.

Yes, on first impressions, Beat Milk Jugs' debut is a bit of a bastard. Kind of cold, subtly sleazy, there isn’t any obvious personality on show, nor seemingly is there a deep message behind the whole affair. Yet when you analyse the event a few days later, after the concussion has worn off, you can appreciate the experience a bit more.

Beat Milk Jugs are a Latvian band who chose to relocate to the UK. They now spend their time between London and Liverpool. Why can they only reside in places that start with the letter ‘L’? I don’t know. A more pertinent question would be - what the hell does Latvia sound like? I’ve been looking at my atlas for ages, and am still none the wiser.

The best description I’ve seen of Beat Milk Jugs is 'New Order melding into Pink Floyd on the Trans Siberian Express'. Sure as the day is long, nothing is ever going to live up to that description. It’s like Crowded House comparing themselves to 'how Lennon and McCartney would sound now, if they hadn’t split up The Beatles'.

The weird thing is that I get what they mean (The first incredible boast, not Crowded House’s delusions). With the electronic backdrop and low-voltage vocals 10 Years of Hangovers leans towards New Order considerably more than the Floyd, though there are definitely Prog tendencies seeping out of the songs. It can be atmospheric, futuristic and surprisingly patient at times. There aren’t exactly any three minute wonders here either.

The Prodigy are the most obvious touchstone, but any influences Beat Milk Jugs have taken from their record collection have been crow barred into the confines of their own blueprint.

Surprise, surprise, it somehow does sound Eastern European. Well, European anyway. A few levels above Eurotrash - The album artwork would beg to differ. I think they commissioned Sid the Sexist from The Viz to design a Roxy Music album cover - and nothing like Eurovision. I also keep on getting images of this record sound-tracking a shitty Jason Statham action movie (well, just a Jason Statham movie. I don’t think there are any good ones in existence).

There is an array of sonic landscapes on offer, to nurse you through the sometimes overbearing industrial noise that Beat Milk Jugs seem to have as their default setting. ‘The Wedding’ is the best example of this restbite. Bringing to the foreground the shimmering, luxurious tones of a piano that had earlier been subdued by electronic overkill. It is evidence of their melodic side, but as soon as you think it is safe to sit down and read The Guardian it turns all glitchy and loud again.

I’m not advocating taking drugs to like this, but a listening environment can change a record, and this is a record for a night out. It’s not something I could chill out to, I wouldn’t listen to it on a sunny afternoon, or could I imagine having it on in the background doing anything aside from maybe torturing someone. It is meant to be listened to in a group environment, probably in a big warehouse whilst off your tits. If you haven’t got any mates, or a social life, still feel free to investigate the record. Maybe if you turn up your stereo loud enough and borrow a strobe light it might feel like the right environment.