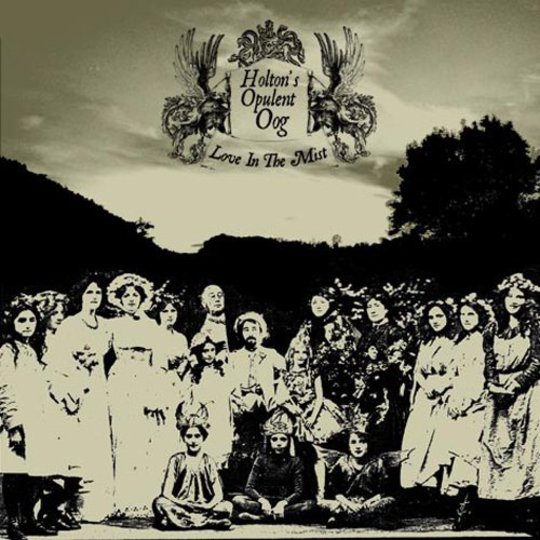 It’s clear that Nick Holton didn’t consult the ‘difficult second album’ rulebook before settling down in his bucolic hideaway to pen the tracks that would become Love In The Mist. Despite the addition of an instrument or two, the dreamy, lo-fi minimalism of 2008’s well received The Problem Of Knowledge is very much back with a vengeance, if you can call it that.

Whilst I would be the last person to suggest sticking with a formula that works is a negative thing, the genre that Holton’s Opulent Oog inhabits has moved on in the last few years – I doubt as many reviewers will be as inclined to fall back on the term ‘Dylanesque’ as did with regards to their debut. A lack of progression and development also means that the quality of your songs has to, at the very least, match the strength of what came before – sadly this isn’t the case.

The consciously ramshackle sound is partly to blame; whilst the main ingredients of classical guitar, pared-back drums and violin remain the same, in attempting to flesh out the sonic landscape of his previous songs, Holton has helped tip the scales from ‘idiosyncratic and charming’ to ‘shouldn’t this have gone through a few more takes?’. This is particularly obvious in the juxtaposition of ‘Gay Archers’, where a flute part added to the already crowded mix is painfully out of tune and ‘I Don’t Believe You’, where arrangements are pared back to the bare essentials of guitar and voice, resulting in one of the stronger moments on the record, as Holton repeatedly intones “It’s all right to say you’re leaving, but I don’t believe you/It’s all right to say you love me, but I don’t believe you”. It would be amiss to not also mention the uninventive but repetitive drum parts, kept sufficiently high in the mix to be grating. Finally, Holton’s voice, rightly praised on The Problem Of Knowledge, fails to hold up to the scrutiny that the minimalism of the record entails; in any instance where the tempo is taken above perambulatory, its well-worn feel starts to feel tired and slurry, reminiscent more of a drunken stranger than a charismatic troubadour.

That’s not to say the record isn’t without its charms; whilst individual parts can go awry, overall the frugal arrangements are well balanced, with Holton’s vocals well complemented by the intertwining strands of classical guitar, violins, the occasional trumpet and the obligatory (and seemingly arbitrary) use of electronic noise. Close harmony is used to good effect on ‘Do You Miss Someone?’, a poignant tale of loves lost, and the occasional up-tempo track or stylistic shift helps stop the record from being filed in that dangerous category of ‘things my Mum wouldn’t find offensive’.

Fans of HOO’s first album, allegedly made for £100, might be content with this second offering, albeit a little disappointed. I just feel that its fleshed-out ramshackle charm isn’t sufficient to paper over the cracks, in particular the dip in the quality of song writing in comparison with their debut. You’d hope that records from the likes of The Tallest Man On Earth, The Felice Brothers (both of whom actually warrant use of the term ‘Dylanesque’), and Phosphorescent would have helped inform and push the quality of this follow up; sadly that doesn’t seem to have been the case.

It's Lovely to be Here