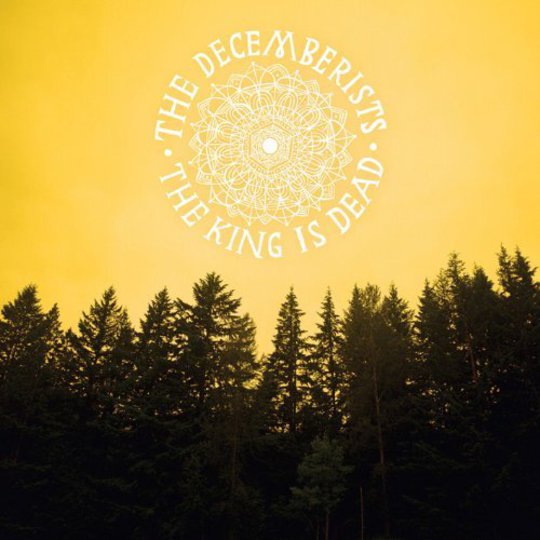 In these turbulent times, at the start of a new decade surrounded by a maelstrom of dodgy finance, environmental chaos and war, it is a comforting thought that at least The Decemberists will be their same old charming selves, a rock to hold on to. Or will they? While The King is Dead does not see Colin Meloy & co. make any seismic genre shift from their previous work, it is nevertheless a different creature to the 19th century English folk-tinged music upon which they have built their name. The focus here is a hop skip and a jump back across to the pond to the musical heritage from whence they came.

Recorded in a remote barn, the songs on show here are most definitely American country and folk – gone are the petticoats, barrow boys and ships laden with riches from the East, and in are hayseed stomps and lazy sun-bleached acoustics. Having dropped plans to make another concept album a la previous releases The Tain, The Crane Wife and The Hazards of Love, this is a step in a different and less quirky direction. The King is Dead features cameo appearances from Gillian Welch and REM’s Peter Buck, with the influence of the latter more than marked. Allegedly, upon hearing said band’s Reckoning, Meloy set out to write a homage to REM, which goes some way to explaining not only the inclusion of Buck, but also the distinct flavour of this record.

Meloy’s voice and lyrical prowess are as distinctively obscure as ever, in particular on ‘This is Why We Fight’ – “Come the war/Come the avarice/Come Hell…When we die, we will die/with our arms unbound” – and the Irish jig ‘Rox in the Box’ - “Get the rocks in the box/Get the water right down to your socks/This bullpen’s built to fallen brother and bone”. ‘Rise to Me’ sees a steel pedal and mandolin orgy and is as hick as they ever go on the record, while ‘Down by the Water’ is Springsteen-like, particularly in the heavy use of harmonica. Other tracks are influenced by that other Americana great, Neil Young, in particular opener ‘Don’t Carry it All’; cue more harmonica.

As a relative paradigm shift of an album, The King is Dead is a success, with The Decemberists managing to make their transition smoothly, creating a work that is well-structured, hook-driven and coherent. In altering their modus operandi, however, they have lost some of the old, audacious magic. This album is accomplished and a great listen, but in losing their quirkiness and bold concepts they have also somewhat lost the one thing that set them apart from the crowd.