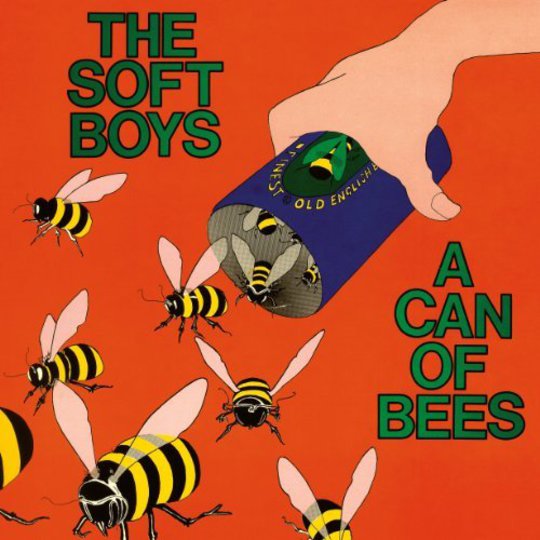 When you’re a pretty obscure proposition like The Soft Boys, it isn’t necessarily in your best interest for a titan of American alternative music to cite you as an influence. Sure it garners a little bit of interest and I must admit that my first encounter with the Soft Boys was by passing mention in relation to REM. The danger lies however, in the fact that by that association alone I thought I knew what The Soft Boys sounded like. Frontman Robyn Hitchcock has himself said "Big Star and us were the rickety bridge between the Byrds and REM". I think he underrates himself. It is a rickety bridge that swings wildly between extremes of eccentric neo-psychedelic streak and eclectic art-pop.

The Soft Boys themselves weren’t shy of wearing their influences on their sleeves; the very English eccentricity of Syd Barrett is all over both of these records, as are the melodic chops of obvious Sixties guitar reference points like The Beatles and The Byrds, with a dose of bluesy riffage thrown in for good measure. As is almost invariably the case with music described as 'jangly' much of The Soft Boys’ first two records is either too taut or bright and prickly for that adjective. In particular debut record, 1979’s A Can of Bees, pares down their textures and experimentalism of their influences to a lean melodic, but almost punk like, forcefulness. These four young men from Cambridge sounded in love with the exuberance of rock'n'roll and were easily capable of the aural assault of punk, but they were nothing like so po-faced.

As such there are hi-octane punk-funk tracks, littered with arch guitar fills and stupidly catchy key changes with titles like ‘Return of the Sacred Crab’. ‘Wading Through a Ventilator’ is a constant blur of ascending white hot guitar, snare rolls and cymbal crashes, with Hitchcock’s voice a garbled off-key slur where the odd audible lines such as “My girl is right in greasy silk/A split tomato in her mind”” providing little in the way of clues as to what it’s all about. The album’s opening line is “Feel like asking a tree for an autograph (’Give It To The Soft Boys’). If Robyn Hitchcock was right about their influence on REM then Big Star represent the Georgia legends' more conventional attributes, with The Soft Boys an inspiration for the wilfully obscure tendencies of the early IRS years. That said, ’Human Music’ has the lazy-spun tunefulness and just off-key vocal harmonies of 20 years' worth of American indie rock and is the record’s only unqualified beauty. Throughout high-end bass melodies of Matthew Seligman seem a forbear for those of Mike Mills, whereas the goonish disco thump of ‘The Rat’s Prayer’ is an exaggerated punk-funk gurn. (6)

The record generally concerned to be the group’s masterpiece, 1980’s Underwater Moonlight, is a refinement in as much as it reins in the more goonish aspects of the debut, allowing the melodies to shine and Hitchcock’s bizarre, occasionally lurid, lyrics to take a more prominent role. Opener ‘I Wanna Destroy You’ is a perfect distillation of all this; a driving rocker that is momentarily a ringer for ‘Teenage Kicks’, a comparison which is obliterated by the falsetto vocal harmonies of the chorus. Hitchcock’s voice is also transformed from the slurred drawl on A Can of Bees: amongst the glam power chords of ‘I Wanna Destroy You’ he struts with a Bowie-redolent vivaciousness, while ‘Kingdom of Love’ has the detached knowingness of Lou Reed, enhanced by a streetwise walking bassline. Despite obvious nods to a number of musical inspirations, The Soft Boys manage to assimilate it all nicely with their catchy rascality shining through. The difference with Underwater Moonlight is that they don’t sabotage their tunes with noise or impenetrable lyrics. Rather, ‘Kingdom of Love’ is augmented by the sudden burst of ringing guitars and saccharine vocal harmonies and the exuberant surf-pop of ‘Positive Vibrations’ is given a mischievous twist by way of a twanging sitar break, several years before Echo and the Bunnymen tried to blend post-punk and psychedelia.

‘I Got the Hots’ meanwhile is an irresistible arch-blues precursor to Beat Happening, albeit fleshing things out a little more with (this time genuinely) jangly guitars. ‘Insanely Jealous’ and ‘You’ll Have To Go Sideways’ saw them broaden their sonic palette with violin and sci-fi keyboards respectively, but it’s the affirmation of the group’s melodic capabilities that makes Underwater Moonlight an influential, and indeed great, record. While other post-punk bands were making greater experimental advances few had the tunefulness, eccentric personality or fearlessness about engaging with the less hip aspects of our musical past that The Soft Boys demonstrate on Underwater Moonlight. (8)