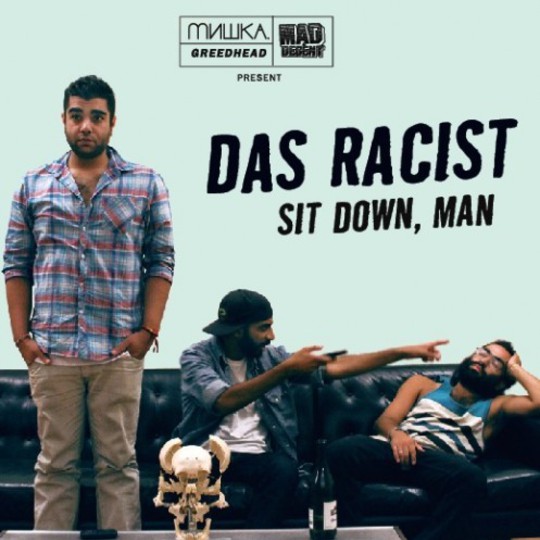 When something truly new comes along in Rap, a lot of people tend to get pissed off. As a lifetime spectator of rap developments, I can recall all of the following being met by massive backlashes: Bad Boy's shiny suits, Rawkus Records, Missy Elliot, Dispet’s surreal post-modern gangsterism, the growth of the south, Lil Wayne rapping technically, MIA and autotune. At the time, these musical shifts stressed people out. Arguments would be carried out, cruel words typed on message boards; 'death of hip hop' statements would be made. However, history usually redeems the innovator; and for those with true grit, these supposed degenerations have always been a sign that things are starting to getting really exciting again. Das Racist are as divisive as all of these step-changes in rap, and for me, just as refreshing.

Das Racist is made up of two rappers, Himanshu Suri aka Heems from Queens, and Victor Vasquez, from San Francisco. They also have a dedicated hypeman. You know you're in good hands with any group that has a dedicated hypeman. The first thing to note about these guys (see their name) is that they don’t take themselves too seriously. While listening to their two recently-released mixtapes, March’s Shut Up, Dude download here and September’s Sit Down, Man download here, one notices a lot of funny shit. A song called 'Fake Patois', delivered in fake patois, about rapping in fake patois. The following lines: “Queens boulevard, Kierkegaard, hustle hard”. “Shorty said I look like a chubby Jake Gyllenhall; I said this ain’t brokeback, and I’m a broke mack, I’m so hard that I’m typing on a broke Mac”. Victor Vazquez calling himself the "second best rapper with glasses after E-40". And my personal favourite “Catch me drinking lean in Italy like I was Pisa, we can eat the flyest cave aged cheese, for sheeze, ma.” Sampling The Doors and The Addams Family theme on the same song. A beat based on Enigma’s 'Return to Innocence' which somehow manages to be rad. There is a level of irreverence going on here not usually noted in most hip hop today, and it would be easy to dismiss Das Racist as a bit of a joke band if one was so inclined. This would be a big mistake, for two reasons. First, rap at its most inventive has always been jokey. Remember Missy Elliot’s Michelin man suits? Busta Rhymes in the 'Woo Ha' video? 'My Name Is'? Paul's Boutique? And second, these guys are fucking good at rap.

On Shut Up, Dude and Sit Down, Man I’m reminded of the lyrical complexity of early Company Flow, Eminem, Mos Def or Heiroglyphics. However, despite the obsessive, nerdy density of Das Racist's wordplay, this stuff is 99 per cent more fun than the majority of rap this technical. Not all their tracks are lyrically dense; over the course of the two mixtapes you get a number of electro-led diversions and RnB pastiches, po-mo wtf moments and indie-pop collabos (Chicken and Meat, Coochie Dip City, Combination Pizza Hut and Taco Bell, Commercial, and Fashion Party featuring Chairlift). While occasionally goofy, the more inventive tracks for the most part work. And on the tracks where they stick to the script and remain within the confines of rap proper ('Luv it Mayne', their Nutmeg freestyle), they blow the doors off. Lyrics manage to be impossibly complex and yet still propulsive, and pack in so many references that these albums reward repeated listens like few others. Topics include, but are not limited to: obsessive Nineties/Noughties rap references (“I’m watching Ghandi till I’m charged and eating bahn mi”), history, physics (shout outs to Schrodinger); fairly obscure fashion (Lanvin and Common Projects), culinary trends; name-tipping philosophers and literary theorists that I had to look up on Wikipedia. And that's only a brief overview.

On Shut Up, Dude, the beats seem to be more of an afterthought to the lyrics and the general conceptual weirdness going on. Despite this, they're still of remarkably high quality. 'Who's That? Brooown!', with its Leaders of the Ncw School sample, and 'You Oughta Know' are two of my favourite rap tracks of the year on a purely musical level. On Sit Down, Man, however, things get a little more musical, with contributions from number of high profile producers of today (Boi-1da) and yesterday (Dame Grease, best known for working with DMX!!!). The Sit Down, Man tracks contributed by the unknowns (unknown to me, anyway), hit just as hard; the aforementioned 'Luv It Mayne' and 'Rapping 2 U' provide Das Racist with sonic backdrops to match the uniqueness of their rhymes. Not to mention 'Return to Innocence' which flips an extremely recognizable and potentially cringe-inducing sample more successfully than anything since perhaps Nineties Bad Boy.

You could pigeonhole these guys as hipster rap (many would agree with you - they’re based in Brooklyn, they've got beats from Radioclit and Diplo and they appear to have read a lot of critical theory.) But you shouldn't. First of all, pigeonholing things into pseudogenres is lazy. Secondly, what Das Racist is doing is much better than any other hipster rap ever made (compare these guys to Plastic Little). Thirdly, you’d be doing them a disservice by focusing on their backgrounds, especially in the current rap climate where people with circumstances as atypical as Kanye and Drake are making some of the raddest stuff available. DR are simply a few guys approaching rap from an irreverent and fractured angle, unremittingly questioning its conventions while still managing to equal or eclipse its best moments. As the emblematic and oft-quoted line goes: “These zooted brown weirdoes is wildin' but they can really rap."