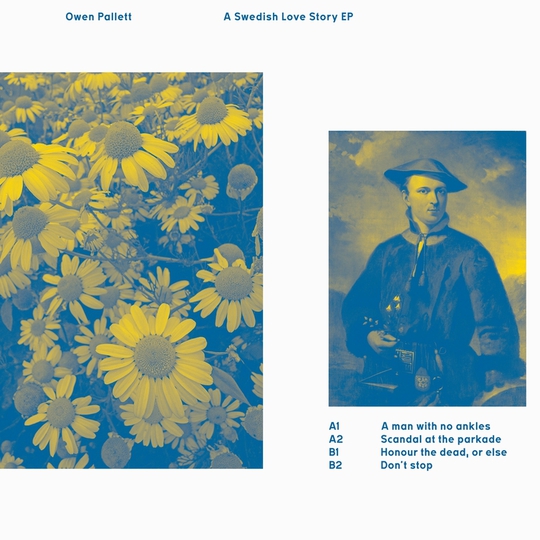 You’d think, having already been involved in two of the year’s best albums (Arcade Fire’s The Suburbs and his own Heartland, Owen Pallett would be getting some well-earned rest. But instead of putting his feet up and watching The X-Factor, he has made A Swedish Love Story. It’s an EP that looks at a third way for Pallett’s music to work, falling somewhere in between the naked, introverted songwriting that dominates his solo albums and the pomp and grandeur of his arrangements for Arcade Fire.

The gravelly beat that opens ‘A Man With No Ankles’ suggests an even more radical change of direction, towards something almost industrial. At the very least, it makes sense of Pallett’s habit of covering Caribou at live shows. As it happens, it's nothing quite so drastic. He plucks his violin delicately, but cheerfully, as though setting the context of a Hollywood rom-com. Contrastingly mournful vocals lie on top of this delicate texture until bouncing bowed strings lunge in, full of hope. The build up is sweet and laid-back, gradually stuttering to a slowed pace before taking a leisurely jolt back up to speed. The track is far from invasive, and this means it might take a few listens to pick out the hooks. But the textural decadence and familiar complexity, paradoxically, make this one of Pallett’s most ambitiously straightforward, peacefully accessible compositions to date.

‘Scandal of the Parkade’ sees Pallett return to more familiar motifs, with its hurried blizzard of violin. As with much of the musician’s earlier music, it’s the speed at which he moves that keeps you focused on the web Pallett is weaving. Melodies and motifs drop in and out, flourishes are thrown in almost at random: it feels like a musical stream of consciousness. This rush of ideas is balanced, rather than compromised, by a rapid, strained, repetition of “Burn them down”. It’s an entrancing listen.

The equilibrium that this EP represents manifests itself most obviously on ‘Honour the Dead, or Else’. It builds from a gothic synthpop base, which is gradually crushed by infrequent bangs of timpani, simultaneously being massaged into submission by Pallett’s lullaby vocal style. A guitar subtly replaces the synths, giving human warmth to the icy cold timbres. But soon, electro melodies invade, as though fighting back. In this way, the song is expressing a musical, as well as emotional dilemma, as it grapples with two things at once. The arrangement breaks down under the weight of it all, to creaking strings and ominous percussion. By the final section though, the song is resolved as the electronic and acoustic instruments calm themselves, reaching a musical compromise. There is something in Pallett’s voice however, that suggests that not everything has been resolved.

‘Don’t Stop’ should be the real pop song of this EP. Structurally, the verses are simplistic, and there is no reason why the track shouldn’t carry on that way. But the bridge is swelling with vicious atonal strings, which stick around for the second verse, as though challenging Pallett to write a pop song in spite of them. By the middle eight, he sounds ready to give up, as all shreds of musicality start to decompose. But as he moans, “Don’t stop”, he suddenly waves his hand and the instruments find their rhythm. Even those awkward, tuneless strings start to fit in to place, bringing the EP to a satisfying, danceable, if not entirely comfortable close.

Fortunately, it’s a discomfort that it’s entirely possible to be comfortable with. It remains to be seen whether A Swedish Love Story marks the beginning of a new era in Owen Pallett’s career. What it is for certain, however, is a small glimpse of the extraordinary range of songs he is capable of writing. It goes some way towards resolving some of the contrast in the different projects he has been involved in. But crucially, it also leaves plenty of doors wide open, as portals to the next stage of Owen Pallett’s music.