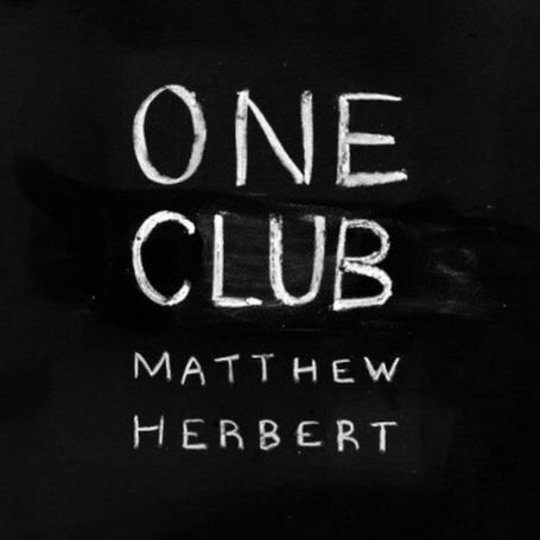 The context of a piece of music’s creation can be hugely important to its understanding and appreciation, and there may be almost no-one in the entire field of music who uses context as a crutch more than Matthew Herbert. Since his mid-Nineties emergence, he’s effed with contact mics and elements of musique concrète in manners which have sometimes aided electronic bliss and which, at other times, you’d be forgiven for finding pretty tough to listen to. If you have a whit of curiosity about your listening, though, and half an eyeball on the evolution of sampled music, you ought to at least have your ears pricked by One Club. In the interests of balance, it should be noted that your ears may beat a hasty retreat, but you agree that half the appeal of conceptual art is knowing how it was constructed, right? So read on.

One Club is part two of a three-part album trilogy, based on singularity and self-limitation. The ‘one’ of One One, released earlier this year, was Herbert himself, who created all the sounds heard on the record. One Pig, to be released later this year, is manipulated recordings of a pig kept by Herbert on his farm and subsequently killed and eaten, as tends to happen to pigs on farms. (This has already attracted a fair bit of dissent, including an inevitable press release from PETA which Herbert disingenuously claims to be surprised by.) Our subject for today is based on an idea so obvious, it achieved elephant-in-the-room status and needed Herbert to bring it to fruition: dance music made from the sounds of a dance club, specifically one night in the Robert Johnson club in Frankfurt. By all accounts, this place is the rave legend’s legendary rave venue: no pose, no hassle and remarkably no security. Their listings for the next couple of months just gave me that ol’ 'if only that girl from Frankfurt in the first year of university 12 years ago hadn’t been 100 per cent unattracted to me' feeling. But I digress.

To get the sounds heard on these ten tracks, Herbert placed mics all over the club and captured people’s myriad activities. They chant, they sing, they stomp, they go for a slash: as much as this album is a celebration of club culture, it tacitly admits that it’s mostly made up of utter mundanity, in the same way most of your body is water. (The end of the closing track, ‘Kerstin Basler’ – this and ‘Marlies Hoeniges’ actually place us in the midst of a euphoric singalong – sounds like what you hear when someone’s phone rings you from inside their pocket.) Then they’re chopped up, tweaked and looped. In some cases, of course, he’s made it easier for himself by picking up a beat or a bassline – yet the notion of having an upferrit dancefloor going off to pretty much any of the staccato cranium-graters presented here is fanciful at best. Opening track ‘Robert Johnson’ (all tracks are named after someone in the club that night, supposedly – perhaps the father of the blues was there in spirit) teases out a tangible bassline, reminiscent of NER*D’s ‘Lapdance’ of all things, but then lays an unholy clatter and backmasked hoover sound over it.

You suspect that Herbert’s intention here was to remind you of the curdled pressure cooker of the wildest techno nightspots, rather than to make tracks to be played at them. Sometimes, like on ‘Jenny Neuroth’ and the last few minutes of ‘Rafik Dahhane’, the manner in which the bass barges its way to the front makes it sound like you’re listening from the corridor outside the main room, which is evocative but… frustrating. Herbert, under his many pseudonyms, has demonstrated he can cook up legit house and techno firecrackers, which is likely why he now makes music like this. At some point, though, you have to ponder what purchasers will actually get from this album, once they’ve enjoyed the idle sport of identifying the sample source and chewed on all the parts which sound like a ‘regular’ dance record. You can’t dance to One Club; it sure as shit can’t soundtrack conversation and while it’s noisy, it’s hardly some Merzbow-style carwash of the senses.

In terms of how this actually sounds, there are plenty of precedents. ‘Oliver Bauer’ clanks with the thuggery of Richard D James’ ferocious Caustic Window records, Berlin’s terrific Errorsmith and Speedy J’s A Shocking Hobby LP. ‘Marcus Bujak’ starts like a lo-fi take on minimal, Mille Plateaux Records-style glitch inscrutability, with a bit of Chris & Cosey’s danceable industrialism chucked in. ‘Nicolas Ritter’ compares to The Scientist’s '92 rave plum ‘The Bee’, or even Aphex’s ‘Ventolin’, for making capital from an undulating electric whine – unfortunately, it doesn’t make very good capital, at least until five and a half minutes in when some unpasteurized bass assaults the senses. If the low-key microloops that make up most of this track were somehow supposed to represent the part of an evening’s raving where you feel a bit fried and go and have a piss and/or a chat, it works, sort of. The extent to which such activity needs to be hailed in the form of avant-garde techno music remains up for debate.