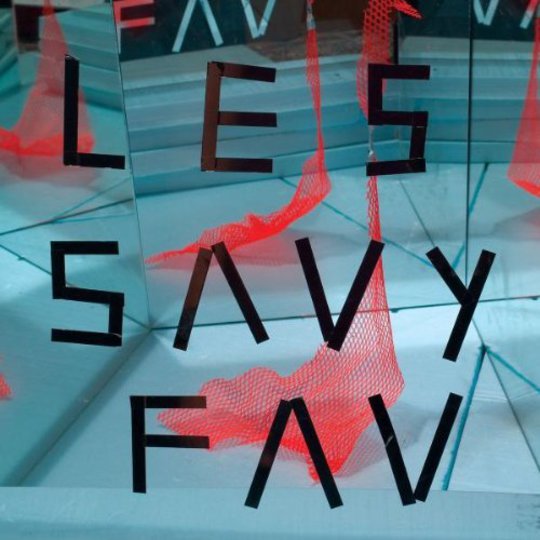 It comes down to one thing.

Of all the straight-up rock bands peddling an almost exclusively post-grunge sound – without a trace of the 'white funk' or 'mutant disco' defining the post-punk revival – only one stands out as worth listening to; worth chasing the hit of whatever first single grabbed you; worth believing in. See, Les Savy Fav don’t offer musical innovation, nor even especially hip influences; their recent live album After the Balls Drop says it all with its choice of covers: ‘Debaser’ by The Pixies, and ‘Sliver’ by Nirvana; anthems from the beginning of America’s longest period of economic prosperity that presented surrealism without politics, and a primal scream before giving adulthood a chance. The present album’s title nods to The Ramones (who professionally dumbed down rock’n’roll), and possibly The Beastie Boys (who played on the idea of returning to other people’s roots, in lieu of their own). Still, there’s that one thing Les Savy Fav do…

Count how often Tim Harrington says “we”, or “let’s”. It’s the simple fact that he’s the mouthpiece for a band, not an Ego, and more importantly, for the crowd’s own sweaty fun, with everyone included. (Being a large, bald, sweaty man wont to play in his pants – UK meaning here – goes a long way, too.) That’s what makes LSF 'post' grunge, rather than a one-band grunge revival, or grunge tribute band. As one group, often left off the roster of archetypal grunge bands, said: We care a lot. This doesn’t actually mean LSF peddle motivational slogans, fit for Monday morning radio-play or business seminars (is it coincidence, or do @#$%-warts like The Feeling actually say 'Hey guys, I figured out how we can get more radio-play: we just have to use phrases like ‘it’s gonna be a sunny day!”'). Instead, LSF offer the conceptually weird scenario that when the party "gets out of hand", it’s not the singer, but all of us "tied to the headboard of Patty Lee’s bed" (but isn’t it great the way we’re all there?!), and when he sings about his dedication to rock’n’roll, solidarity’s built into the title of ‘Meet Me in the Dollar Bin’.

For those who know LSF, expect no changes here – the one guitar chops, and the other guitar squalls; no keyboards have been added; no epics or spoken word tracks are attempted. The important things is: LSF are still a gang. LSF are still six parts Bossa Nova to four parts Bleach, with ‘Lips’n’Stuff’ especially Pixies, and two tracks (‘Poltergeist’ and ‘Clear Spirits’) devolving into a glossolalic babble reminiscent of ‘The Happening’. On the best song here, ‘High and Unhinged’, Tim accuses someone of selling out; maybe some current haircut band, maybe Kurt Cobain, maybe himself. It’s not an explosive song: it draws you in, so you feel the initial bewilderment, and then the mounting resentment. This is an “I” song, by the way, because you have a personal relationship with your heroes… until they become obsessed with the size of the crowd, rather than the gathering as a way of reaching a whole lot of individuals; that doesn’t mean it’s any less a song about the importance of being “us”. See also, ‘Appetites’ which does explode, and does snarl, and for an unsettling moment, says "… show us your tits", before following with: "and show us your scars / from the shit that you did", reminding you the collective isn’t always friendly, and it’s where the condemnation comes from, and it’s why you have to find your own crowd.