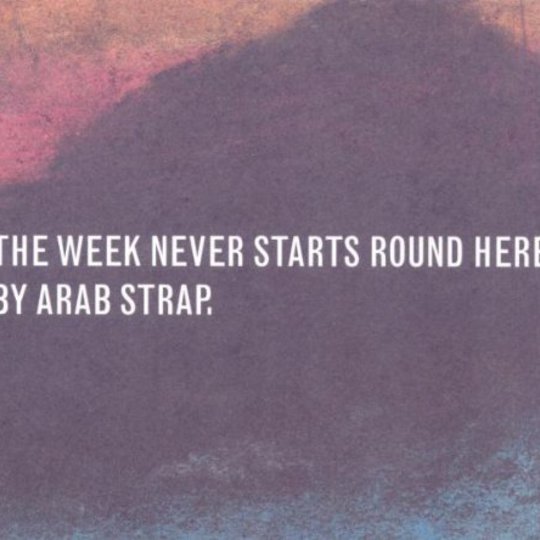 Saying goodbye to Arab Strap hurt more than any other break up. As a band they had grown older and wiser alongside their fanbase, soundtracking everything from high school crushes, dealing with abortion, raucous nights out and waking up in the early morning sunlight with the person you love in your arms. But the reason for the profound sense of loss when they left was simply that there has never been anybody else like them.

Too often in music, bands get referred to as being ‘unique’, but this Scottish duo genuinely were that most rare of things. Middleton pulled the strings musically - improving ten fold with each subsequent release yet always maintaining that mystique to the songs’ atmosphere – whilst Moffat supplied the words and tone of voice, always pitching it perfectly between humorous (but often cynical) banter and painfully honest admissions of one’s own faults. People regularly remark of bands putting themselves into their work, but within Moffat’s words lie the entire outline of his life to date.

Over their career of 11 years, the band outgrew their initial miserablist mistag and became a relatively unsung national treasure for both their recorded work and live shows. And so it seems right that this, their debut album, should now be reissued forevermore with a second disc featuring their first four Peel Sessions and debut King Tut’s gig (having formerly been packaged in the Scenes of A Sexual Nature boxset).

The Week Never Starts Round Here is a perfect snapshot of a Nineties indie band finding their feet. Some songs here hint at what was to come; ‘Blood’ still sounds delightful, walking a fine line between amusing and scathing ("My last lover’s playing with her new man now / It’s only three weeks we’ve been apart / They sat together and he sent her flowers / Well he can fucking keep that fickle disco tart"), whilst ‘Kate Moss’ still sounds remarkably fresh, with its opening statement of shock that someone could not find the model "pretty". Others jar a little with the rest of the band's output, but are still wholly decent indie romps when taken outside of that realm, such as the booming reverberating-snare used on the slightly eerie ‘The Clearing’ and the whimsical ‘General Plea to a Girlfriend’, complete with its whistle solo. It’s particularly interesting hearing the live renditions on the second disc alongside these studio versions, with the results sounding fuller and more rounded, even at this early stage.

The Peel Sessions also yield interesting results. ‘The Smell of Outdoor Cooking’ – an early single – is fun whilst ‘Soaps’ gets an early airing before its pivotal role on their second album. Whereas ‘I Saw You’ is a wonderful example too of what it’s like meeting someone for the first time, with the words and music marrying perfectly; starting with sweet reflection, a period of nervous energy as to where you stand and ending in a mess of loved up joy and confusion, featuring such insight along the way as "I saw you twice and both times you were wearing orange / And she told you I fancied you in the toilets at The Garage".

But despite the band going on to better it, both the Peel Sessions and album belong to ‘The First Big Weekend’. Even 14 years on, it sounds utterly mesmerising. The splendid live version has entirely ‘new’ lyrics detailing their journey to the BBC and Malcolm’s dour backing, bemoaning the weather, but the accolades belong to the studio recording. Building from a simple guitar line until the starring drum beat expands into a wonderful climactic indie anthem, it captured the hearts of Peel, Guinness’s advertising team, the label bosses and most music fans of the time; because it totally ‘got’ what being a twentysomething in this country was like during your downtime; nights out with your friends, some drinking out, some watching of The Simpsons, some passing interest in the opposite sex and a bit of late night cheese misuse. It’s the song that still defines the band to many, and one that certainly raised the bar of expectation surrounding the band such is it’s confidence and perfection.

All in all, whilst it’s a thrill to revisit the past, in hindsight Arab Strap’s debut album is arguably the weakest record the band ever made, yet everything a first record ought to be; raw, full of ideas, nervously energetic to paper over any shyness and with plenty of room to improve. And by God, did they.