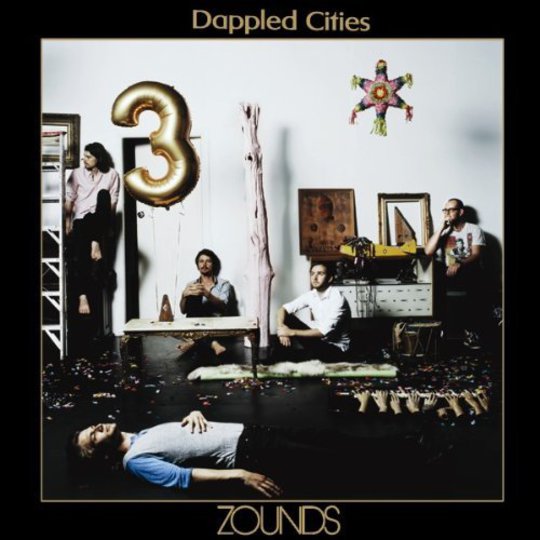 There’s something you should know about Dappled Cities before we start, so you can’t say I didn’t warn you. Because as well as being a band of Australian indie rockers, who’ve toured with Temper Trap, LCD Soundsystem and Modest Mouse, they are responsible for Alphabreaks.

Alphabreaks is a 26-episode series of 90 second films, made for Disney, designed to teach children the alphabet through the medium of popular song. Look. Now, given that I Googled 'Alphabreaks' before I listened to Zounds, I went into the record, as you can imagine, with a number of frightening expectations.

All of these assumptions were smashed to bits by the first beat of ‘Hold Your Back’. Like 65daysofstatic, its semi-industrial urgency pounces out of the speakers. Persistent bubbling synths and infrequent sci-fi lyrics remind of Muse in their tenser moments. Thick, intricate layers of melody move at warp speed, though the track really feels more like a context setter for the main event than an experience in itself.

Strangely though, it’s not until ‘Don’t Stop There’, several tracks later, that Dappled Cities decide to continue on their journey through time and space. By now, they’re sounding a bit like a subdued version of The Flaming Lips, though they don’t seem to be enjoying it as much as Wayne and co. do. It feels more like the band are floating in space with Ziggy Stardust, but he’s just moaning about his ex. The sleepy ‘Space Oddity’ pacing creates an interesting vibe, making this one of the stronger tracks on Zounds. However, it is not unique in being grossly referential.

‘The Night Is Young At Heart’ has the same slightly over-reaching vocals and smattering of dancefloor frustration that made The Killers popular. And despite a fun Eighties’s-inspired discotheque coda, it’s by now clear that Zounds is an album with little focus.

The guitar driven indie-rock gets even more generic on ‘The Price’ (who remembers The Departure?). It does that annoying thing of transposing its melodies onto synths in order suggest some kind of artistic depth, without ever actually achieving such a feat. In a similar way, the instrumental chorus of ‘Answer Is Zero’ adds nothing but a dull, uninspired melody to the song’s tired main pattern.

Dappled Cities come close to redeeming themselves with ‘Middle People’. The body of the track is restrained, with clever syncopated piano and powerful atmospheric production that changes the whole mood with a single chord. It does a lot with a little, in that structurally, it is quite loose. But here, the band sound more natural and honest than they do on the rest of the album.

In general though, they never quite sound like themselves. Zounds sounds like a compilation that charts all of the slightly awkward musical trends that have soiled the music press over the last five years. If Dappled Cities stuck to one of them, they might have at least achieved some continuity.

As it is, Zounds is an album of stark juxtapositions. It introduces elements of chamber folk with its closing track, ‘Stepshadows’, and plainly this is far too late in an album to insert another musical reference point so overtly. A clash of styles on this scale can only ever sound insincere. At least on kids’ TV insincerity is part of the package.