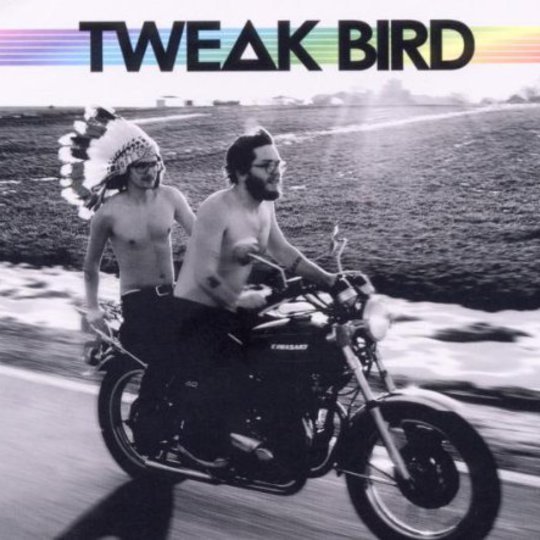 Picking up on Tweak Bird’s front cover homage to Anywhere by Japanese cult rockers Flower Travellin’ Band is an excellent way to lead off this review: not just because any album cover with two monochrome shirtless dudes mounted atop a high powered Japanese motorcycle riding into the distance with gleeful looks on their faces is a definite contender for best album cover than year, either. Mainly, it’s because it’s certainly better than the general trend surrounding reviews of their latest record: listing other rock and roll two pieces of note and hoping that one of them bears even a smidgeon of comparison to the brothers Bird (they sound sod all like The White Stripes, they’re considerably quieter than Lightning Bolt and considerably louder than The Black Keys etc.). Because, as readers of Julian Cope’s Japrocksampler will be aware, Anywhere was a covers record which saw the later revered act take on their influences: Muddy Waters, Black Sabbath, The Animals and King Crimson.

Certainly, the spirits of at least three of those acts course through the veins and sinew of Tweak Bird’s debut full length. Without resorting to platitudes favoured by other critics, their prior outut - aka 2008’s mini-album Reservations - displayed a unique cocktail of influences and sensibilities: fusing a garage rock approach to song length with grunting Sabbathian riffs and a pretty much unique approach to song structure and vocal delivery. Tweak Bird is a somewhat looser, more varied, and yes, gulp, more ‘prog’ sounding release than its forbear.

‘The Future’ opens the record with huge great slabs of throbbing guitar and cacophonous drumrolls that sound initially nothing like T-Rex, yet on repeated listens, all the fuzz and weight of the guitars is merely some pretty dense window dressing for some defiantly Bolanesque hooks. “Open your mind / we’re tunnelling through/ blasting a passage way through” goes the singsong harmony over ‘Tunneling Through’ the album’s most melodic moment, which tunnels straight through cranium and resonates around eardrum. Single 'A Sun /Ahh Ahh' is as catchy as it is bizarre: a jarringly smooth saxophone hijacking a stripped down Melvins riff around the two minute mark and taking it brilliantly off into cloud cuckoo land, vaudeville “Aah Aahs” ebbing in the background.

And if at times Reservations found the listener scratching their respective heads at the vocal displays, this time, the reedy, brotherly harmonies feel more integral to the band’s music. Whether it’s through a softening of sound, or simply improved performances, the pair’s vocals seem to have lost the gimmicky feel which perhaps dogged their initial efforts: 'Lights and Lines' and 'Beyond' in particular benefit from a gentler vocal which draws attention to the afore-mentioned melodicisms.

The second half of the record, propelled by aeronautical end couplet ‘Flyin’ High’ and ‘Distant Airways’, is notably further out and more psychedelic than anything the duo have turned out before. If it was possible for a two minute song to ‘sprawl’ then the former would manage it ably, echoing slow motion vocals and a careworn riff seguing into a Crimson-esque flute solo, whilst the latter dissolves from stonery sleaze into a saxophone free jazz, nodding towards The Stooges' 'LA Blues'. But it’s the kind of weird that’s accessible rather than abrasive; and it’s this, along with the duo’s uncanny ability to condense the epic into two minute bursts which makes Tweak Bird such a treat: the record seems to last far longer than the 27 odd minutes it actually takes up. It’s an excellent party trick, doing in two to three minutes what most bands usually string out to four or five, and it means that Tweak Bird is surprisingly easy listening whilst remaining challenging and conducive to deeper submersion.

If there are criticisms, then it’s the use of two tracks of interesting, but ultimately slightly pointless noise on a record which isn’t exactly overlong. ‘Round Trippin’ and ‘Hazement In The Basement’ might add another notch to the band’s bedpost, but they fade quite happily into the record’s course rather than divert particularly effectively.

That aside, Tweak Bird have crafted a taut, muscular and clever LP that quite possibly marks them out as one of rock music’s genuine innovators. There are echoes of Queens of the Stone Age around 10 years ago with Rated R, and that same willingness to innovate and explore whilst writing music to nod your head to pervades Tweak Bird. Whilst those giddy heights are presently out of reach – on the evidence presented here – there’s more than mere suggestive potential about Tweak Bird. This is a blisteringly record that defies convention as much as it delights in melody, and a worthy flagbearer for rock music in this year’s crop of forward thinking releases.