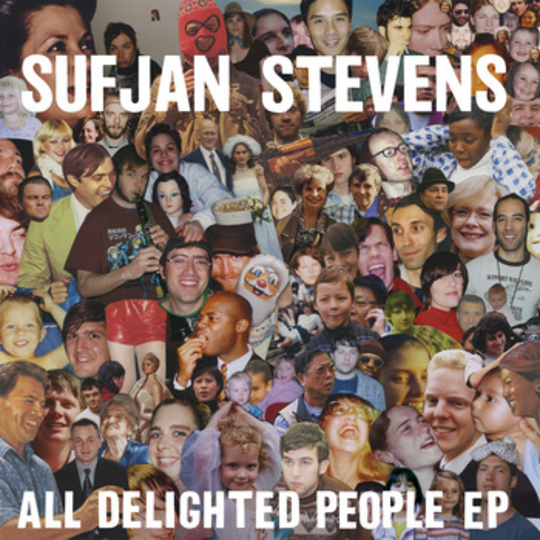 When you’ve captured the hearts of indie boys and girls the world over with ingenious indie-folk paeans to Illinoise, Michigan, swans, life and death, your relationship with God, the Chinese zodiac, the child-like joys of Christmas... when you are the indie darling du jour, when you are Sufjan Stevens, you can do whatever the hell you want.

The indie-watching world was taken unawares on Friday by the release of a new EP from the mysterious Michiganite. No, it’s not another installment in the semi-serious and now apparently abandoned '50 States' project (Stevens: 'The whole premise was such a joke').

A 60-minute work which stretches the definition of EP some way beyond its limits, All Delighted People is described by Stevens’s label Asthmatic Kitty as a 'dramatic homage to the Apocalypse, existential ennui, and Paul Simon’s ‘The Sounds of Silence’.' The epic - and I mean epic - title track appears not once but twice; if all 11.38 of ‘All Delighted People (original version)’ wasn’t enough for you, then there’s the slightly more enjoyable ‘All Delighted People (classic rock version)’.

You can listen to a snippet or download the whole here for an entirely reasonable $5 (or not, it’s up to you. Other digital downloads are available.)

And the verdict? The most depressing thing about Sufjan in 2010 is that he’s become the one thing he never threatened to be before: boring.

Taken as a whole, Sufjan’s work isn’t entirely enjoyable - when was the last time you put Enjoy Your Rabbit on your iPod? - but part of the fun was that you could never guess the next musical turn he’d take beyond the next chorus.

But All Delighted People sounds dangerously close to Big Rock; it was made under the influence of The National and recorded in their Brooklyn studio. Is he, at 35, suffering an early mid-life crisis? Is ...Delighted People the Ferrari and leather jacket he didn’t need to buy?

In reality this is a return to the punkish ethic and indie-slacker cool of the first full Stevens album A Sun Came. That record was far from a classic, but where its childish attitude is endearing, All Delighted is simply puzzling.

The opening title track shifts uncomfortably through a meandering structure from angelic choirs and plaintive brass to crashing drums. Its multiple sections all strive to make sense of an awkward melody, but none fully do. It’s closer to the Seventies prog rock of Pink Floyd and Peter Gabriel-era Genesis than is strictly healthy.

Perhaps most saddening for Sufjan fans who were entranced by the history, colour and Americana of Illinoise and Michigan, or the confessional religious mystery of Seven Swans, All Delighted People has no concept. It is not about anything, as the Paul Simon-aping central lyric from the title track shows:

Hello darkness my old friend, it breaks my heart; I’ve come to strangle you in spite of what you’ve left. And don’t be a rascal, don’t be a laughing dog in spite of us. All I’m deciphering from the spirits and the life within.

And all this before we even get to the 17-minute 'Djohariah', a tribute to Sufjan’s oddly-named sister. Hidden in its endless dirge, somewhere, is a song. But listeners must endure no less than ten minutes of truly awful 'challenging' guitar solos before they get there. That a musician capable of such artistry should submit such a risible piece of fret-wank nonsense to tape is a baffling thing indeed.

Five years after he seduced listeners with the haunting images of Civil War soldiers rising from their graves and the poets hovering outside windows, Sufjan has come unstuck. He’s capable of weaving such a compelling mix of avant garde, classical and pop music, but this time the artist’s self-indulgence has got the better of him.