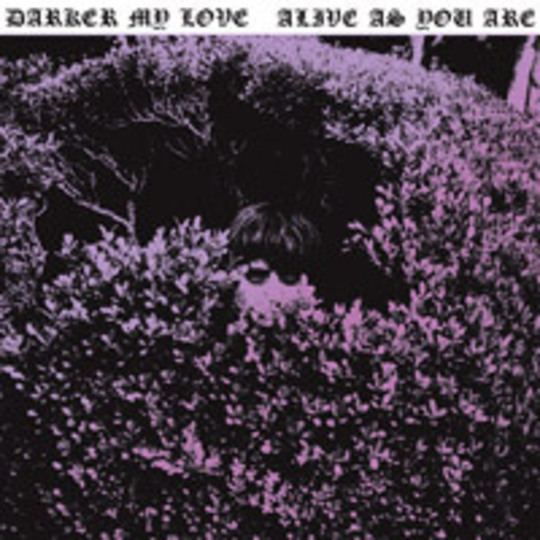 For a band whose allegiances lie with the post-shoegaze/noise scene yet contain members who've played with the disparate likes of The Distillers and The Fall amongst others, it would take a braver man than I to predict exactly whereabouts Los Angeles five-piece Darker My Love are headed next. Having ditched several drummers, along with their previous sound - one-time Brian Jonestown associate Dan Allaire currently resides behind the kit - the 2010 model of Darker My Love is all but a reminder in name-only of the one that set pulses racing in 2008 on second album 2.

Granted, one wouldn't have wished for a watered down xerox of its predecessor, but the West Coast psychedelia on a Nashville vacation of Alive As You Are could almost be a different band entirely. When Tim Presley sings "Act like you were born again in your own time" on the album's mid-point 'Maple Day Getaway' he could almost be writing his and Darker My Love's updated autobiography. Certainly anyone expecting a repeat of the gargantuan riffs and soaring melodies of 'Summer Is Here' and 'Talking Words' will be disappointed here, although once the initial shock subsides, there are still a handful of treasures in Alive As You Are to suggest the instinctive chameleon within the band hasn't totally dampened their songwriting abilities.

At times Alive As You Are feels like a homage to the likes of The Byrds and The Grateful Dead, the opening 'Backseat' and reflective 'June Bloom' both sounding like entrees at an arranged marriage ceremony between The Notorious Byrd Brothers and Anthem Of The Sun. The late Sixties vibe is omnipresent throughout, 'Split Minute' taking its heed from the likes of ? And The Mysterians while the mawkish balladry of 'New America' offers a more Mersey-based flavour as Presley and bass player Rob Barbato harmonise intently "Make sure you take what you need and more".

On the occasions when Alive As You Are comes to life, such as with the aforementioned 'Maple Day Getaway', Led Zep-influenced 'Dear Author' or obtuse love song 'Trail The Line', Darker My Love's subtle side ebbs and flows like a modern day Teenage Fanclub, themselves initially derided for a shared love and close musical proximity to The Byrds and Big Star among others. 'A Lovely Game' meanwhile takes bar room blues back to its earthy roots, stomping away heartily, Canned Heat's 'On The Road Again' immediately springing to mind.

Even some of the more melancholy pieces such as the Canyon-esque 'Rain Party' and ode to post-wedding day gloom 'Cry On Me Woman' ("Since I've been married I haven't felt the same" opines a disillusioned Presley) have a more distinguished - humane even - side to them than anyone familiar with the full-throttle assaults of Darker My Love or 2 could have expected. Overall though, Alive As You Are's sea change is perhaps just a little too severe to fully engage with in one sitting, and despite the band's insistence this record represents a significant step forward, its retrogressive veneer casts something of a bewildering shadow. Lord knows what Mark E Smith and Brody Dalle would make of it all. File under 'frustrating'...