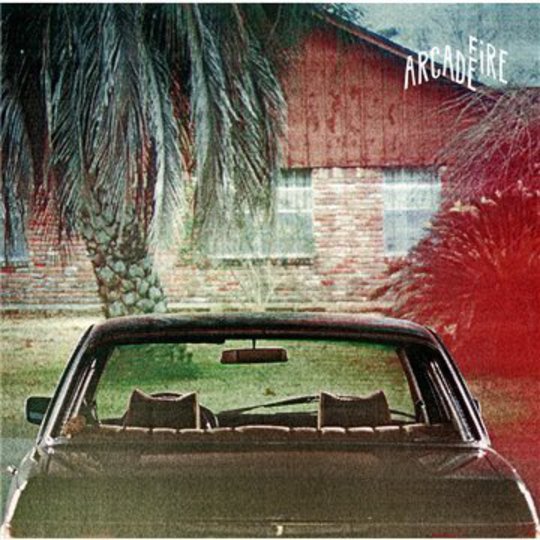 A few nights ago, I decided that it would be a brilliant idea to write my review of Arcade Fire’s third album in real time. I would allot myself its not inconsiderable running length to bash out this article, whilst also, crucially, knocking back a finger of beer for each mention of “the kids” or “the suburbs” in Win Butler’s lyrics.

This was obviously a terrible plan, and none of what was written must ever see the light of day. But the one thing I learned is that “the kids” and “the suburbs” get mentioned A Lot.

And of course, you could extend the game, because The Suburbs does not mark those words' débuts in the Butler lexicon. On the band’s self-title 2003 EP, the song ‘No Cars Go’ features the lyric “us kids know”, while on the astounding ‘Vampire/Forest Fire’ - which I'm going to call the band's best song, thankyoukindly - the singer vocally yearned to “live in the suburbs”.

So what is the kinship between the Arcade Fire of 2003 and 2010? The Suburbs is undeniably a climbdown from the weapons grade bombast of Neon Bible, and this will cheer many. Tellingly, on ‘City With No Children’ Butler sings “never trust a millionaire quoting the sermon on the mount; I used to think I was not like them, but I’m beginning to have my doubts”, which you’ve got to assume is a reference of sorts to the preachiness of album number two.

Yet The Suburbs is not a reprise of the feverish spirituals of Funeral or the Arcade Fire EP, records made when the band were pretty much “kids” themselves. In 2010 their average age is around 30, and this record’s talk of youth and suburbia isn't an attempt to recreate the band they used to be, more a pointed, often painful reminder to themselves of the people they once were.

“Now you’re knocking at my door, saying please come out into the night, but I would rather be alone” Butler sings on ‘We Used To Wait’, one of the faster tracks on a very measured album, its muffled guitar riff ploughing through a twinkling sea of roiling percussion and chiming harpsichords. Like much of The Suburbs it has an air of haunted nostalgia about it, abandoning Neon Bible's end-of-days vibe for something subtler, lyrics blurring the line between childhood reminisce and adult fears. Where Funeral was about the passing of innocence, The Suburbs is about looking back upon it with a wistful, sometimes frightened eye. The key lyric is this respect belongs to the aching ‘Suburban War’, where Butler intones “Now the music divides us into tribes, You grew your hair so I grew mine[...] my old friends, I can remember when you cut your hair, I never saw you again; now the cities we live in could be distant stars, and I search for you in every passing car”.

Hugely important to The Suburb’s air of reverie is its surface calmess. Virtually everything drifts along at mid-tempo, and though bombast is lessened, the sound remains thick and rich, the production – from Markus Dravs, who did the honours for Neon Bible - smooth. This may sound a little dull, but it works, partly because Arcade Fire have enough depth (and instruments) to keep things interesting, partly because they avoid self-consciously ‘stately’-sounding songs, and partly because it suits the concept - there is something fundamentally suburban about this record's unhurried, almost sedate nature.

It’s a very long record, and this mostly works to its advantage. If at times your mind starts to drift off through the nice production sheen then that's fine - there’s always another highlight waiting to rise from The Suburbs’ flat expanse and calmly sucker you: the simultaneously tiny/HUGE chorus to ‘We Used to Wait’; the stunning, early Simple Minds-esque synth line to ‘Half Light II (No Celebration)’, glowing and chugging like the workings of some celestial engine; the simple yet sinister ‘The Suburbs’ itself, a cutely chilling lullaby forged from the neuroses of Butler the boy and Butler the man. It’s not without fun moments, though: ‘Empty Room’ sounds like a more spiritual cousin to Abba’s ‘Fernando’, which is a wonderful thing. It’s one of two Regine lead vocals, the other one being ‘The Sprawl II (Mountains Beyond Mountains)’, which starts not unakin to Blondie’s ‘Heart of Glass’, but builds to something momentous and pulsing, a final cry to “quit these pretentious things and just punch the clock”, The Suburbs briefly escaping past and present to break through into raw daylight.

Of course, there is a very obvious downside to such a record. The Suburbs’ sheer expanse may be the point, but tracks like ‘The Sprawl I (Flatland)’ and ‘Modern Man’ are very qualified successes, filling space cinematically , but glassy and slightly dull when considered on their own. And the evenness in tone does mean The Suburbs lacks either the explosive, erratic magic of Funeral or the clearly defined, brilliantly coloured melodies of Neon Bible. There will be moments when you find yourself a bit bored. Would The Suburbs still work if it were pruned to its ten or 12 best songs? I doubt it’d do much damage.

In a nutshell, The Suburbs' two most important achievement are to a) be good and b) not be a rehash of its predecessors. At one point or other, we've all hoped for some sort of Funeral II. Not going to happen. But nor will there be a Neon Bible II, or The Suburbs II. To go back to 'Vampire/Forest Fire’, its very last line hinted at this band's sense of trajectory: “I'd return if I'd ever cared, but there's no interstate I find to take me there”.