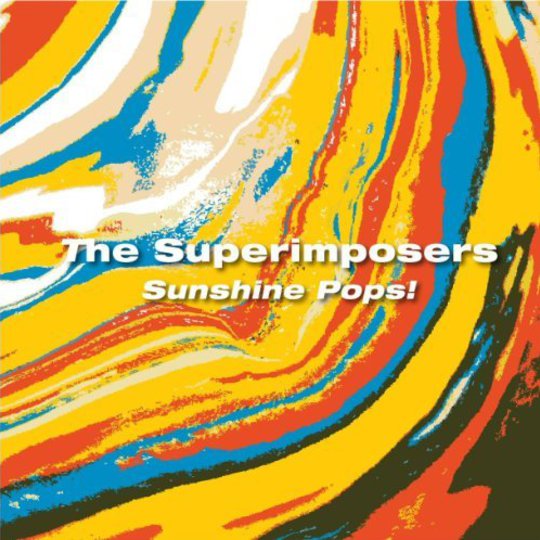 The Superimposers are one of those bands that on paper sound like an intriguing if potentially messy proposition. Formed in 2005 after former fishmonger and car mechanic, Dan Warden, and Miles Copeland met in a joke-shop, time was spent studying 'musique concrète' and 'avant garde production' before the duo decided to turn their talents to crafting Sixties-rooted sunshine pop. Well then, what happens when the ideologies of musique concrète and avant garde production techniques clash with Shuggie Otis and Brian Wilson?

Surprisingly little of interest it turns out. Sunshine Pops! is without a doubt the most woefully dull album this writer has heard this year (or last year for that matter).

If you didn't get it from that title, the album happens to be of a rather sunny disposition. And what better way to convey the untameable joy of summer than through a record of Sixties pastiches that wouldn't sound out of place soundtracking an Austin Powers film. If you thought the nauseating sitars of Belle and Sebastian's 'Legal Man' was them at their retrogressive and derivative worst, then imagine that song minus its sense of escapism and the cheeky meta-pop references to Orange Juice/Al Green in the lyrics, and replace them with verses that sound like Toploader and inane sub-Britpop nonsense like "You took your time to ssshhhhhhiiiiiiiiiine". It is tempting to accuse The Superimposers of overly hammering home the summer references, as subtlety really isn't their forte (see the ahem... scene setting seagulls samples at the start of 'Harbour Mystery'), but they don't do anything quite so emphatic as that, the vocal delivery maintaining an unemotive chilled out vibe throughout. Imagine Jack Johnson, but from Dorset and you're not too far off the mark.

This pedestrian nature extends to the music itself. One thing that The Superimposers and producer Shawn Lee do deserve credit for is the how convincing the sonic details of their Sixties pastiche are. This is particularly notable on the Left Banke-style baroque pop of 'Little Miss Valentine' with its gentle sway of "ooh-la-la" harmonies, playful harpsichord, warm acoustic jangles and loungey percussion. 'The Beach', meanwhile, boasts crisp snare and tambourine beats worthy of Spector and gently reverberant vibraphone. The album maintains a cohesive sound throughout, but for the slightly incongruous, though hardly mind-blowing use of programmed beats on 'Tumbledown'. Unfortunately, The Superimposers just don't have the tunes to match the sixties songsmiths whom they aspire to emulate.

For an album that wears its classic pop influences so clearly on its sleeve Sunshine Pops! is sorely lacking in arresting melodies. Sure, 'Four Leaf Clover' and 'Seeing Is Believing' are sort of pleasant, but they're totally incapable of raising any kind of emotion or response other than...well 'meh', except to cringe at the banal lyrical platitudes such as "Falling, falling, lying, trying! 'Cos seeing is believing, you gotta believe what you're feeling". The only song that stirred any real feeling (other than mild annoyance) in this writer was 'Tumbledown'; an ethereal concoction of warbly synths, eerie strings a la 'Wichita Lineman' and a nagging guitar refrain, it transcends pleasantness to be genuinely gorgeous. It's a struggle to say anything interesting about most of the songs on Sunshine Pops!, except perhaps to say that 'The Beach' features a guitar tone redolent of Six-era Mansun, or to pick out the odd pleasing detail, such as the charming Disney-like tinkle of a descending glockenspiel melody on album closer 'Would It Be Impossible'. Even then it is just one interesting detail on a broad canvas of blandness.

It seems harsh to say it, because it's obvious a lot of care has gone into honing their sound, but I struggle to think of any reason I would recommend this record to anyone. What they have in craft, The Superimposers severely lack in inspiration. There are probably people out there who could use a nostalgic middle-of-the-road sunshine pop record for background listening, but to actually give Sunshine Pops! your attention is a monotonous and stifling experience.