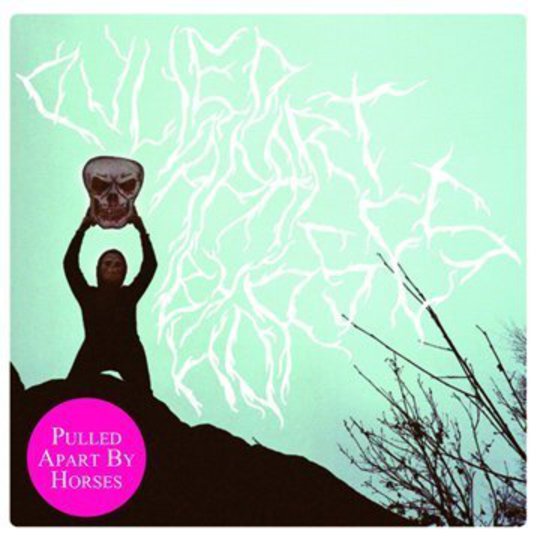 Likelihood is that nothing about Pulled Apart By Horses’ debut is going to come as much of a surprise to the majority of people reading this review. Now, forgive me this journalistic faux pas a moment, but I’m about to make a few vague, sweeping statements about the readership of DiS. So let’s assume that at least a good amount of you reading this fit into the broad 18-35 age bracket, are probably UK based and most likely attend a fair amount of smaller venue gigs and alternative/boutique-type festivals each year. For those of you that do fit into the social category I’ve just described, it’s pretty inevitable that at some point over the last couple of years you will have had some experience of seeing PABH live.

And that’s because, in the short time the band have existed, they have been touring like crazy – supporting the likes of Future of the Left, The Bronx, Blood Red Shoes and Biffy Clyro and turning up on the new bands stages of numerous festivals – so odds on, you’ve probably had at least a brief encounter with the band. And this is something that has certainly worked out in their favour. While some new bands seem able to emerge from nowhere with a fully formed debut record yet having little live experience, the recorded potential of bands like PABH is dramatically increased by a healthy dose of road-testing.

The reason for this is, in short, that Pulled Apart By Horses are a party band. They’re the kind of band spawned to exist at the sort of shindig that takes place in someone’s kitchen, where people drink value-brand vodka straight from the bottle and Refused’s The Shape of Punk to Come is the soundtrack pumping out of the CD player. And as any good wedding planner will tell you, nothing makes a party run smoother than plenty of practice.

Through their relentless touring PABH have given themselves the opportunity to test their brand of hard-edged party soundtrack on a variety of audiences and to fully refine their formula. On the album the effect of this is clear right from the off; ‘Back to the Fuck Yeah’ walks a well balanced line between aggressive riffs and catchy accessibility. It brilliantly demonstrates the trick at the core of PABH’s shtick, an ability to combine hard-rock credibility with the guilty pleasures of all-out pop-punk.

The band keep this balancing act going pretty successfully throughout, offsetting the hooks of the opening track with the brasher riffs of ‘The Crapsons’, before cutting into the high speed build-up of ‘High Five, Swan Dive, Nose Dive’. ‘Yeah Buddy’ provides the record's purest pop and its most , un moments while closer ‘Den Horn’ offers the closest thing PABH have to all-out metal.

As the majority of tracks here have previously been released, either as singles or on one of the bands EPs, this is all probably pretty familiar to a lot of fans (and as we’ve already established you’ve all seen PABH play, right?). Yet it’s nice to hear the whole thing together as a streamlined, finished package and it’s likely to win the band a fair amount of fans among the uninitiated.

It would be difficult to claim that any part of Pulled Apart By Horses offers anything particularly new or cutting edge but, in fairness, that isn’t what you want from a party band (when was the last time you were at a house party and heard someone utter the words 'oh, go on, stick some Philip Glass on?') What you do get is a winning formula refined and rehearsed to bring out its full potential. So yeah, the content of Pulled Apart by Horses’ debut may come as no surprise, but that's exactly what you want from this band.