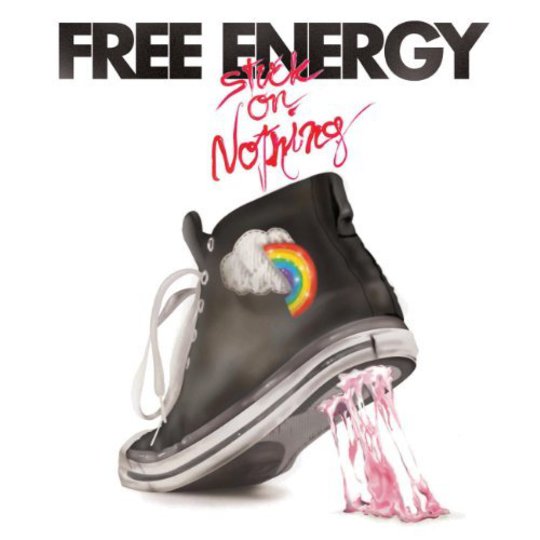 Every Thursday my hometown pub hosts a live music night. The sorts of bands that play are invariably old boys serving up a good old fashioned stodge of refried village-fete pub rock, the sort of music that would make James May think twice before reaching for the clippers. Good fun for those involved, but not the sort of thing that’s ever going to set Pitchfork’s prongs-a-glowing, and certainly not the sort of thing to get rabid blog-buzz after courting one of NY’s finest producers.

Forgive my surprise then, but when I first got smacked round the head with Free Energy’s own brand of FM Radio Route 66 stomp-along jock-rock, I wasn’t expecting a DFA lightning bolt to strike anywhere within a thousand mile radius. But it seems His Royal Murphyness has missed producing guitar bands, and so the hype commenced, leading to debut LP Stuck On Nothing.

Such a balls-out irony-free rock album feels so rare in 2010 that writing about it almost makes me feel like I’m scribbling for some Seventies fanzine. I mean, we’re talking about ‘four Pennsylvanian dudes making good time cruising rock ‘n roll’ here, ‘some crazy mix of Thin Lizzy and T Rex, riffin’ their way across America!’ You’d need DNA evidence to separate Free Energy from the influences they’re so clearly in thrall of, but it’s all so blusteringly fun and care-free that they make you feel like a curmudgeon for even contemplating giving a shit.

Tracks like ‘Bang Pop’ and ‘Dream City’ burst out of the traps with the same lusty exuberance that would’ve made girls in polka dot dresses swoon thirty years ago. ‘Hope Child’ is ostensibly about as hot-right-now as Nick Griffin riding round Buckinghamshire on a Segway, but its meaty power-chord bombast and reckless abandon somehow wins you over by sheer force of its unrestrained vigour. Sure, singer Paul Sprangers relies pretty heavily on the lyricists’ Encyclopaedia Generica when singing lines like “It never feels alright, and it never feels OK, cos we know that every night’s gotta end some day”, but get beyond their MOR as a line-painting machine frontage and there’s a refreshing lack of post-ironic posturing to be found. They’re all about being young, dumb, and living for the moment. Whether to cringe or sing along is another matter, but as the minutes tick along you realise they’re clearly having awesome amounts of fun making this album, and I mean like, proper, youthful fun. Pushing your friend down a hill in a shopping cart while shouting ‘awwww yeh!’ into a camera kinda fun. I’ve never felt so devastatingly British as listening to the Weezer-lite douche-rock of ‘Light Love’ and thinking ‘now technically I don’t like this, but I do appear to joining in with the chorus regardless.’

If you were to get all indiesphere snob about it you could employ a Jeremy Vine style trend-o-meter to realise there’s only about a 2.3% swing that separates Stuck On Nothing from a new Jet record. But the Malkmus-esque college-dropout style of vocal delivery by Sprangers steers the record away from cock-rock farce and towards a sweetly languid carelessness. Songs like ‘Young Hearts’ and ‘Wild Winds’ shimmer and pop under the hand of James Murphy, whilst ‘All I Know’ glistens with string embellishments, making for an undeniably pretty ode to youthful abandon.

Ultimately this is an album full of unapologetically high-spirited All-American hi-jinx. Sprangers sums up the album himself on ‘Dream City’, “We’re riding through the night, trying to get around, in love with the electric sound.” On this song Free Energy inadvertently soundtrack that obligatory coming-of-age teen-movie scene where the group of high school pals pile into their Dad’s Chevy for one last summer road trip before graduation. There’s a latent melancholia as they speed off into the distance cracking open beers and giving each other high-fives, and Free Energy sum this feeling up perfectly. Screw incoming responsibilities; enjoy the recklessness of youth whilst you can.