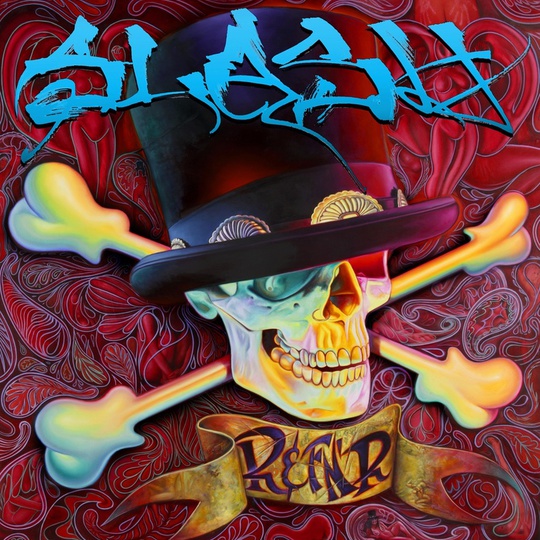 To what extent is a reputation untouchable? Guns N' Roses released Appetite For Destruction in 1987; 22 years on the band are all double the age they were upon releasing their seminal work, and treading on former glories to say the least. Of course, much is said about Axl Rose and, with his diva behaviour, Madame Tussauds face and ill-advised retention of the GNR name, they have good reason. But what of Slash? Somehow a man from Stoke who has worn a top hat for the best part of his adult life has managed to escape ridicule, even going so far as to be revered as an unimpeachable icon of cool, in a sort of MTV-ish way.

Sadly, anyone who thinks Slash is still a dangerous rebel, downing shots at The Viper Room and soloing on tops of mountains will have their patience tested to the limits by his self titled solo album. Technically Slash is his first solo record, the man born Saul Hudson having spent his post-GNR years working with Velvet Revolver and Slash’s Snakepit. However the term solo is stretched here, given that a whole host of guests have come down to the studio to join the party. These range from those you assume are Slash’s old drinking buddies (Ozzy Osbourne, Lemmy, Iggy Pop) to some new young rock Gods like er, Adam Levine of Maroon 5 and Black Eyed Peas' Fergie.

The vintage names Slash has reined in are truly impressive. Anyone with an interest in alternative rock from the past 25 years will see a name that piques their interest, be it Chris Cornell, Dave Grohl or Wolfmother’s Andrew Stockdale (Presumably Robert Plant declined the invite). What is disappointing about Slash, however, is the fact that it seems getting the names into the studio was where the creative process began and ended. So many of the songs here would simply not make it onto new albums from anyone involved.

Things start well with ’Crucify The Dead’, Ozzy Osbourne’s piercing vocals striking the iconic poses this album should have been defined by. It’s the teaming up of two legends you'd hoped to hear. However things soon descend and soon you’re having to avoid the unwanted sounds of Fergie, Chris Cornell’s razor damaged larynx and worst of all: Kid Rock. It’s like a bad computer game where you’re running through a jungle trying to fend off the attacks of some of the worst voices to infect music in the past ten years. Presumably Kid Rock is the end of game boss, truly a hardship to defeat.

Slash’s guitar work is sweet throughout, giving him ample opportunity to cock one leg on an amp and go at his Gibson like only he can. Musically speaking all of the music on Slash comes from four fifths of the original Guns N' Roses line up (no guesses for who didn’t join in) and Dave Grohl’s drumming on the instrumental ‘Watch This’ is another timely reminder of what a powerhouse he is.

However the overriding feeling with Slash is that all its nominal maker has done is ticked a series of boxes, given the fans an opportunity to see pub discussions come real and thrown in a random selection of popstars for a misguided sense of variety. Slash might not be Chinese Democracy bad but make no mistakes, this album stinks.