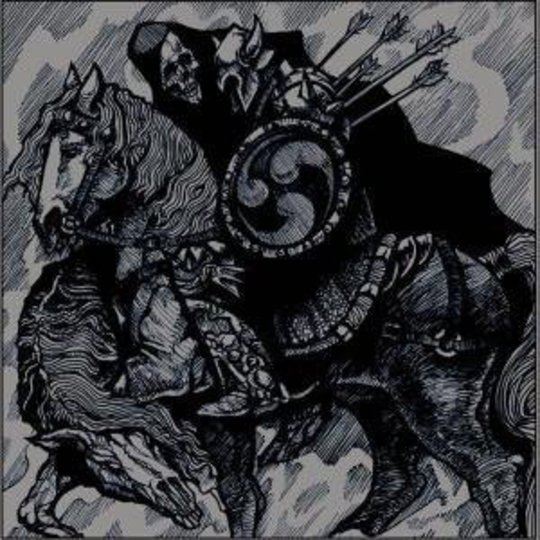 It was only last week that I had cause to ponder how the resurgence of trad’n’true heavy metal has helped to make it more of a done thing to toss around warmongering iconography, in both words and pictures. Conan, a three-piece doom metal sluggernaut from Liverpool, are... well, they’re called Conan is what. The metal world’s failure to overuse the fuck out of this name is a total elephant-in-the-room baffler from where I’m sitting, but you snooze you lose, especially if you snooze for thirty years or so, metal world. Horseback Battle Hammer, forgive me for recycling a week-old observation here, sounds like the result of a generative internet game or set of novelty fridge magnets, as titles go. I’m down with this, just as much as I’m down with all the songtitles on the new Harvey Milk record reading like they were scratched on the wall by a middle-aged man who ten minutes ago had just come up from his parents’ basement to axe them to death. Spice of life, man.

Right, so Conan. More mysterious and skulking than your average British doom/sludge/whatever crew circa 2010, they have technically been together four years, Horseback Battle Hammer being their second EP (four songs, 33 minutes); accurately they have been inactive for most of this and their debut Battle in the Swamp was never properly released. Their ex-band credentials are thin at best, although I’m compelled to note that drummer Paul O’Neill was apparently once in ska-punk band Zen Baseballbat. Effectively unencumbered by past form, then, Conan proceed to render themselves one of the most savagely compelling things happening in all of metal right now.

They’re not what you’d call trad doom exactly – not enough explicit Sabbath ancestry; a taste for rolling the listener up in thick carpets of distortion rather than whisking him away on guitar solo wings – but any heads deep enough in the rabbithole to know what ‘that early-Nineties Maryland doom sound’ means might get some twinges of recognition from opener ‘Krull’ onwards. It lasts just over nine minutes, primarily at a wretched trudge, and speeds up to a gut-flaunting gallop about 60 seconds before its end. Namecheck-wise, Conan are not impervious to comparison. Electric Wizard have been here before (literally, in the case of Foel, the Welsh studio where this was given a magnificent recording), in their less psychedelic and most flatly hate-filled moments, and bands like Moss and Monarch have the same knack for planting powerchords and leaving them to rot. ‘Dying Giant’s vocals actually make me think of a more distant, desperate version of Steve Brooks – maybe more redolent of his time fronting Floor than Torche, then.

For a band operating in an intentionally limited stylistic space, though, there is a truly impressive individuality to Horseback Battle Hammer. By the time you peep the clock as ‘Sea Lord’, the 11-minute bearded bastard of a closer, comes to a conclusion with feedback imitating chill northern winds (north-western, that should perhaps say), you ought to have elected to throw it on again. If you’re not one to sweat the slow stuff, this ought to repeat itself over time, too. Thereafter, maybe Conan can be convinced to play live more than once in a blue doom moon.