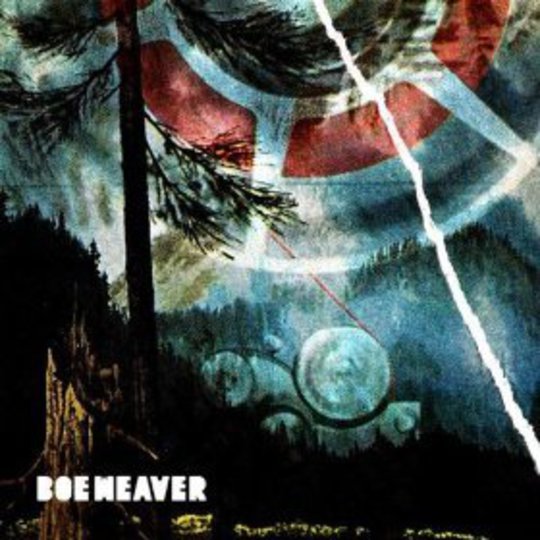 The idea of drugs as largely a metropolitan or urban concern always seemed a little disingenuous. Even if you ignore the whole ‘back to nature, back to our roots’ vibe of acid hedonism and the entire ethos of the hippie movement, there’s some fundamental part of the human brain that takes boredom as motivation to get royally spannered. A childhood spent in a rural setting could probably qualify in that regard, especially if you’re the sort of unhinged folk the Isle of Wight’s Boe Weaver sell themselves as. Having grown up in London, I imagine that I’d be the same if I’d spent my formative years on an island containing barely a fortieth of its population. Perhaps unsurprisingly then, their self-titled debut takes a trip deep into fucked Wicker Man territory, lurching off on a warped journey towards the kind of haunted lo-fi psychedelia that’s deeply in thrall to woods, fields and strange druidic rituals.

There’s certainly a fair hunk of Sabbath in their music’s genetic code, as they share that band’s peculiarly earthy approach to heavy guitar fuzz. They’re also able to pull off a similar trick of burying a surprising depth and subtlety under ostensibly simple riffola. At times Kyuss spring to mind as comparison, lurking in Boe Weaver’s wide-open, brain-fried expanses. ‘Ghouls’ certainly spooks like early Queens Of The Stone Age, the title’s phantoms moaning almost inaudibly under a horror movie stomp. Opener ‘Deadpan’ is drenched in such a thick cloud of heavy weed smoke it’s almost impossible to make out its individual components, but builds around a rather lovely twin guitar harmony that even its opacity can’t disguise.

To Boe Weaver’s credit, there’s far more going on here than gonzoid, drugged-out noize. ‘Mysterious Island’ is constructed around a strikingly addictive shuffle beat, erecting a cathedral of Sixties-ish keyboard harmony around which guitars spiral like vapour trails, or smoke from the brightly lit end of a rollie. Columns of distortion appear throughout the album’s length but are stripped away almost as soon as they emerge, to reveal delicately plucked swirls of acoustic guitar or kitschy organ figures. ‘Monster Maker’ pulls off a similar trick but ups the dissonance factor significantly, culminating in the sort of nauseatingly intense and frighteningly schizophrenic stoner jam you might expect to soundtrack a Seventies horror B-movie. In fact, that’s exactly where it could have emerged from - Boe Weaver’s overall feel is of a dusty, ahead-of-its-time obscurity plucked from a old rock obsessive’s record collection. It fits quite neatly alongside the vogue for library music Trunk Records and Finders Keepers are currently spearheading.

There’s scant information available online about them, and even the album’s press release is suitably cryptic, save useful snippets of information about a penchant for ‘massive animal masks’. Yet despite the self-consciously goofy mode of presentation and the druggy haze surrounding their music, it’s hard to avoid the feeling that Boe Weaver are fairly lucid, and largely conscious of what they’re managing to put together. There’s certainly far more to them than initially meets the ear, despite the outwardly simplistic feel. Both big (monstrously so) and clever, then - at least much cleverer than most would give them credit for.