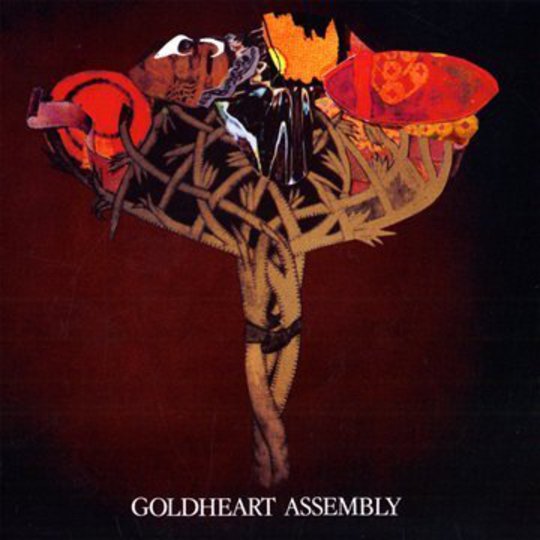 As musical chat-up lines go, ‘hey, wanna hear this new album recorded in a steam train museum by a bunch of bearded blokes and released on Fierce Panda?’ must be one of the worst you could come up with. Don’t let it put you off though. Goldheart Assembly’s debut album does indeed fit that somewhat un-alluring bill, but works despite of it. Or rather because of it, turning these unfashionable elements into something special.

There’s a sense that Goldheart Assembly are a band out of step with what’s going on around them, in the best possible sense. They may be based in the midst of London, but their look betrays a bunch who are more comfortable in the countryside. They may cringe at the ‘British Fleet Foxes’ tag, and it’s not an accurate musical marker, but there is a similarity in the way both bands forged a little bit of the outdoors to escape their urban surroundings. Goldheart Assembly might also deal in some swoonsome harmonies, but that’s where the similarities end.

They’re much more influenced by the type of bands that strive to write conventional pop songs, but can’t help but get distracted on the way. There’s only a few tracks here that take one idea and really stick with it.Wolves And Thieves' opener, the radio-friendly 'King of Rome' is probably the best example, a surging, instant slice of guitar rock, which takes off thanks to the soaring dual vocals of songwriters James Dale and John Herbert.

Elsewhere, the gentle, lulling 'So Long St Christopher' meanders into a mid-track organ freakout, while 'Reminder' descends into a slightly sinister web of high-pitched laughter, and the whole of the album is brushed with this sense that a mass of ideas are being crammed into the space of 12 songs.

This delight in finding new paths for their ideas is best found on the 'Engraver’s Daughter'. Starting as a sparse acoustic strum, it soon picks up pace and starts to glide down a sunkissed American highway like a long-lost Seventies rock classic. Elsewhere, that museum-cum-recording studio comes in handy, as the rhythm of the train tracks are turned into backing tracks, adding to the organic, stately pace.

It’s all lovely stuff then, but it’s also unfortunately something that hasn’t done well for bands that have tried similar things before them. Writing smart, acoustic-based pop songs worked okay for the Magic Numbers for a while, but they soon ran out of steam, and aside from 'King Of Rome', there’s nothing here as instant as those bearded brothers and sisters ever came up with. The Coral only ever found success when they ditched the really weird stuff, and then fell into the trap of writing boring, Noel Gallagher-rock.

Despite such spiritually similar bands failing to set the world alight, you do feel that Goldheart Assembly will find a devoted following amongst those who like a chorus to sing along to but don’t want to be bored by the second verse. They’ve certainly got the songs and the skilled arrangements to do so. Just don’t let the steam trains and beards put you off.