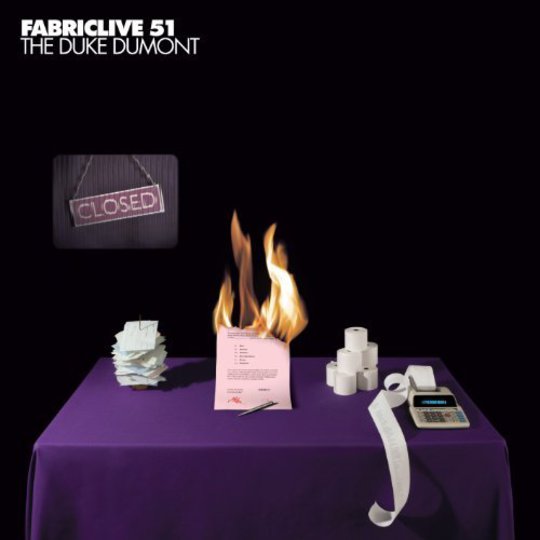 Fabriclive returns for its 51st installment, inviting Adam Dyment, better known as The Duke Dumont, onto the decks for a 13 track tribute to the famous London club. Famed for his ability to remix indie songs into near unrecognisable dance tracks - so far claiming the notable scalps of Mystery Jets, Bat for Lashes and track nine on this mix, Late of the Pier’s ‘Bathroom Gurgle’ - Dyment nevertheless avoids all attempts at being labeled as cliquey or restricted to a niche. It is this palpable desire to avoid being labeled which has lead him to declare that he has made a conscious effort to not promote any particular genre with this mix. Ultimately, the aim is to represent himself and Room 2 at Fabric at four in the morning: a pan-genre techy and emotional groove. But talk is cheap, and while there is diversity across these 13 tracks, that all encompassing eclecticism is never really reached. However, he has stated that the ethos behind this mix is purely to 'make something that I’ll still really love in a few years’ time', a statement that neatly brushes away pedantic questions raised over track choice or style.

While Fabriclive.51 never reaches the headier heights set out before it (for example, Adam Freeland’s Fabriclive.16), this is a danceable and overall pleasant house mix. The record begins with Saturn V’s ‘Come Into My Life’ which sets the tone for the first half. The verging on afro-latino 4/4 beat surrounds clipped vocals, all creating the effect of a beach party, before leading into Audio Soul Project’s ‘Reality Check’ with the refrain of “Why do we dance?”. The cheesy latin house is left behind as we delve into realms more techy, with a driving wonky bass line. From the soulful vocals on Kollektiv Turmstrasse’s remix of Federleicht’s ‘On the Strees’, to the bizarre reworking of ‘Bathroom Gurgle’ which growls “move your body to the bass line” and begs you to do anything but, the mix swings between the slightly cheesy and the slightly odd. Not until Idioma’s ‘Landscapes’ are the heights reached by A.S.P.’s ‘Reality Check’ attained once more. The sweeping, gentle and altogether beautiful work of electronica serves as a book end, finishing the mix and carrying you off to bed.

Apart from a few occasions, Fabriclive.51 never really blows you away. However for those who wish to re-create late night house music sessions, this is a decent disc. as The Duke said himself, this is not a pretentious mix, a statement of intent or a conscious effort to push any genre or style. It’s merely a re-enactment of nights that he loves and music that he wants to listen to. If you happen to share his taste, then this is for you.