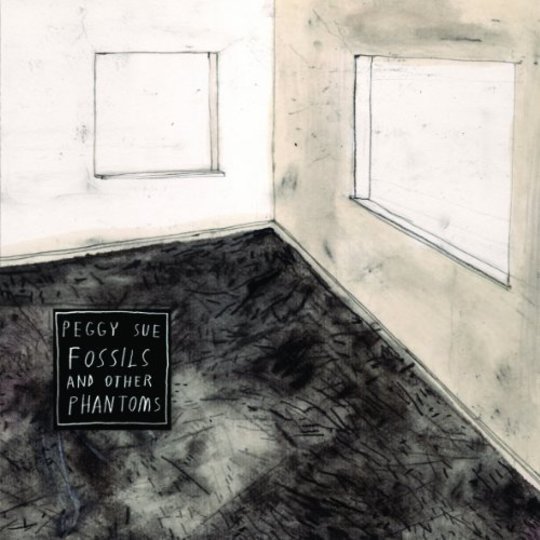 You would expect an album about having your heart broken over and over again to get a little whiny. A catalogue of chaotic relationships has left Peggy Sue’s Rosa and Katy audibly bruised. Their debut album’s artwork suggests a bleak void that their break-ups have left for them to crawl into. Luckily, neither of them chose to let emptiness consume them. Instead, they elected to fill the gaps in their lives with ukuleles and accordions, aching vocals and clattering percussion, dampened guitars and dry sincerity.

All of the above comes out in ‘Long Division Blues’, with a vocal hook as insistent as its fearsome drumming. It starts with a lightly strummed guitar, which drops only subtle hints of the imminent crescendo. By the three-minute mark the band are flaying their instruments and vocal chords, putting the noisiest rock pretenders to shame. Not bad for a folk trio from Brighton.

Recent single ‘Watchman’ sees Peggy Sue take another opportunity to shrug off the sensibilities of their sound and smash some speakers. The drums trundle along while a guitar is neatly plucked, only to be intruded by occasional cracks of a string being yanked. Cymbals dissolve into a cacophony that rises until the vocals dominate a searing a cappella wall of sound.

It is a formula that works well, showcasing the duality of their sound. Peggy Sue are poignant and articulate as they wallow in the turmoil of lost love. But they aren’t moaning; this is just scene setting. You find yourself offering them a shoulder to cry on, but before you can start wishing you’d gone to the pub instead, they find their independence. Songs like ‘Yo Mama’ go from trembling with destitution to an almost feral sonic liberation. It’s this journey that the listener is taken on that keeps them from boredom.

This structure could itself become a little tedious, but the middle of Fossils And Other Phantoms is brave, demonstrating a much lighter touch. ‘She Called’ is carried by its empowered vocals, as Olly Joyce clutters the background with intentionally messy drumming. This just forces the two vocalists to flex their lungs even harder to keep afloat, and is an imaginative articulation of emotional confusion.

‘Careless Talk Costs Lives’ is just as interesting, with its intricate, hushed, hurried lyrics. Its stripped down arrangement and infectious closing line, “You like the way your name fits in the corners of her mouth”, leaves a bitter taste – but one which is strangely moreish.

This naked performance however, is not as successful elsewhere. In a way slightly reminiscent of early Patrick Wolf, ‘February Snow’ is comprised mainly of ukulele. But rather than sounding eerily unfinished, as seems to be the intention, the track sounds bluntly incomplete.

It’s a shame that the closing moments of Fossils And Other Phantoms don’t quite bear the fruits promised by its opening stages (though final track ‘The Shape We Made’ is a last minute highlight). However, the complete package is worth investing some time in. More often than not, Peggy Sue derive passion from poignancy, taking their listeners on a journey that makes having a broken heart interesting again.