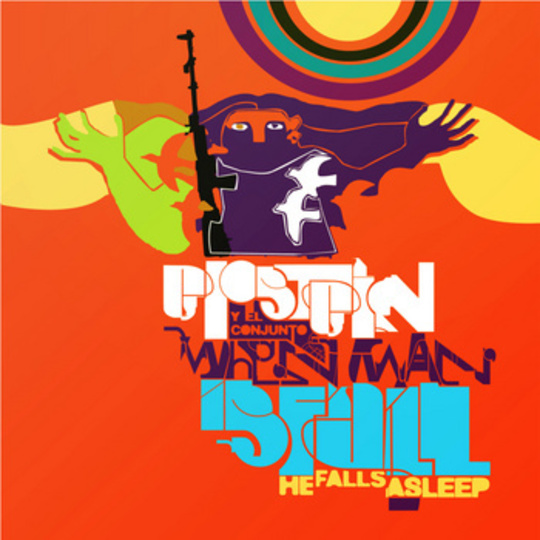 Given the idiosyncratic nature of its roster, it feels appropriate that Asthmatic Kitty is putting out the first of Roberto Carlos Lange’s original worldwide releases, under his tough-to-Google pseudonym Epstein. Quite aside from anything else, When Man Is Full He Falls Asleep can certainly stake a reasonable claim for most appropriately titled album yet released this year. From start to finish it walks the tightrope between high-concept art schtick and lowbrow lo-fi with quite staggering delicacy, leaning precariously from side-to-side and tipping briefly over into chaos before righting itself. Yet it somehow manages to hold itself together as a coherent entirety, like a particularly disjointed fever dream bound by the consistency of your shifting consciousness.

As a whole it’s positively labyrinthine, and at times perversely Lynchian. There are moments in Mulholland Drive, and even the mindfuck that is Inland Empire, where for a beautiful and all-too-brief few seconds everything makes sense, and the story begins to reveal its innate simplicity – before falling apart thanks to a particularly surreal curveball. At its best When Man Is Full He Falls Asleep manages to generate that same teasing cycle of revelation and obfuscation, and the title’s hazy, soporific connotations neatly encapsulate its siesta-gone-wonky feel.

If it’s taken this long to getting round to a description of what Epstein’s music actually sounds like, it’s because it proves a struggle to adequately sum up. As a former Prefuse 73 collaborator, tracks like ‘When We Hide (This Time)’ and ‘Gallop’ display an obvious debt to hip-hop, grooving off slo-mo kick-snare patterns that occasionally lapse into unquantised post-Dilla territory. The latter is also quite strikingly pretty, beginning chunky and distorted before the bottom end drops out to leave keyboard melodies echoing around all corners of the mix. Opener ‘Arrival To New York (A Short Story About Getting There)’ meanwhile sees Epstein go all Tunde Adebimpe, wrenching out sore-throated gospel styles over a chaotic background clatter. ‘There’s A Way Under Here’ finds a middle ground between the fleeting electronica of Sketchie’s Rain By High Lantern album (an obscure gem from a few years ago, well worth tracking down) and reverby synths straight out of an eighties teen movie. But everything is tinted a slight sepia tone, linking it (intentionally or not) to the echo-laden lo-fi pop that’s been springing from the blogs as of late.

Over the past year or so, the whole ‘hauntology’ thing has been thoroughly co-opted and drowned in a white-out haze of chillwave/hypnagogic pop/glo-fi/whatever. Of course, hauntology is merely an idea, a way of interpreting and understanding a piece of music or art – not a genre descriptor in its own right. Its deployment and execution within an artist’s music can be remarkable: see Broadcast & The Focus Group’s quite astonishing sketches on Witch Cults Of The Radio Age, or the sheer potency of Burial’s nostalgia for an era he was never more than fleetingly involved in. But the side effect of a saturated market drenched in eighties childhood nostalgia and cheap recording equipment can be to further muddy the (already extremely hazy) waters, often forsaking the double-edged memories that make it so thematically rich for a one-size-fits-all wash of delay.

Epstein’s music on When Man Is Full He Falls Asleep sidesteps any such criticisms by its very nature. Like Lynch’s films, there’s a subtly terrifying undercurrent that bristles just beneath the apparently naïve surface, something a listener could just as easily ignore as confront head-on. While it rarely rears its head to expose the nightmare beneath, it’s this bracing contradiction that keeps even the album’s most abstract moments ablaze with nervous energy. Admittedly, I’m still not entirely sure what to make of it all, but at times it hardly seems to matter, especially when the gorgeous, Broadcast-ish ‘A Lost Animal’ emerges towards the record’s end like the warm glow of sunrise.