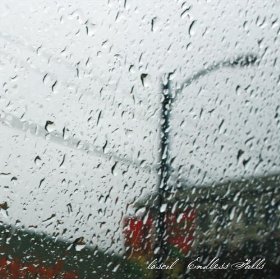 'endless falls' is the fifth full length release by scott morgan under the loscil moniker. the album begins and ends with the sound of rain recorded by scott in his back yard, precipitation being a constant presence in his home city of vancouver. many of the other sounds on the album are derived from these same recordings, processed and combined with other harmonic sounds to create the textures and drones. something completely new to this release would be vocals, of a sort, a first for any loscil composition, contributed by
daniel bejar on the final track. scott states "the collaboration with dan made us both incredibly nervous. dan felt out of his element doing 'spoken word' but rose to the challenge. i felt self-conscious about changing the listening perspective rom abstract, ambient music into foreground, conscious listening. the first time i heard dan's voice recording i was
terrified and was tempted to call the whole thing off. i listened to it a few more times and it completely grew on me. now i can't imagine that piece without his performance. i love dan's use of words, his vocal rhythms and the intimate intensity of his voice." jason zumpano is the only returning performer from past collaborations, he is responsible for the piano parts. kim koch and robert sparks make appearances on violin and bass recorder. the cover photos for the album were taken from the backseat of the family car by scott's newest collaborator, his 4 year old daughter sadie.
description from www.roughtrade.com