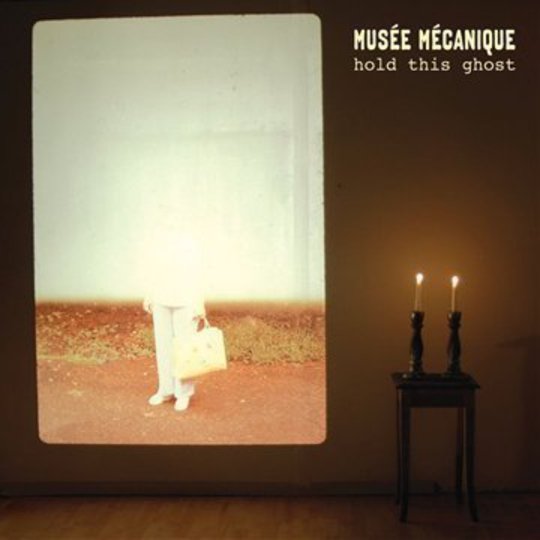 “I can’t seem to take the fact I might just give up” sings Micah Rabwin on ‘Fits and Starts’. It’s a phrase that sums up the sound of most of Hold This Ghost, the debut album from Musée Méchanique. The ten songs held within seem to project an air of reluctance, a reluctance to commit, a reluctance to step on any toes, to really go any further than a polite sing song about how sad they are - and Musée Méchanique sound like a sad bunch. Born out of two sad multi-instrumentalists in Portland, with help from their friends, Hold This Ghost is a sad record for sad folk, particularly for sad folk fans. Everything sounds down. The singing sounds down, the drums sound down, the guitars are plucked and strummed with sadness, even the keyboards sound depressed. Hold This Ghost sounds like a product of their environment, a snapshot of living in the Pacific Northwest. With so much rain and wind and cold it’s a wonder that these guys can cope at all. But they do.

The other mood that Musée Méchanique manage to tap into is a spooky one. Throughout Hold This Ghost the gentle vocals are combined with eerie sounding keyboards, keyboards that swirl and pulse against the gentle sway of the music, that wouldn’t sound out of place on a horror film soundtrack. Opener ‘Like Home’, with its waltz time and vamping accordion conjures up an image of a haunted carousel, whilst the code of ‘Sleeping In Our Clothes’ suggests a Mexican funeral march, all mournful trumpets and sorrow filled brass. Always sad, always singing. Here are some more words to describe the feel of Hold This Ghost: wistful, earnest, yearning, longing, defeated, forlorn, unrequited, slightly hopefully, but not too much. Polite, well meaning, accepting, rejected, more longing. Other words include vague, subtle, agreeable, a tad bland.

‘The Things That I Know’ is the emotional low point of the record, a tale of a lonely sounding girl who “watch trains go by” and “rides her bike in the rain”. Our singer thought he once saw her smile, so he decides to wait for a while. It’s an arresting tale, but fails due to its delivery. The vocals are so soft, the guitars so gentle, the lone violin embellishing the wistful, earnest, yearning, longing, defeated, forlorn, unrequited, slightly hopefully feel of the song. It’s an enjoyable song, and certainly is very affecting, but once it’s over it leaves you with nothing much. Maybe a feeling of regret, a feeling that you’ve just heard something, but whether you could recall that something is tough. It’s too vague in its delivery; it lacks even the subtlest of punches.

Musée Méchanique take their name from a museum in San Francisco, which houses a collection of coin operated arcade machines. The machines dated back from the origins of coin operated arcade machines right up to present day. A lot of arcade machines are forgettable, a simple way to waste some time and some 50ps. The ones on display at the Musée Méchanique are there for a reason – they’re the best, if you will, or at least the most memorable, the most interesting. Unlike these machines, the songs on Hold This Ghost are fairly bland and mildly interesting at best. Should Musée Méchanique wish for their music to be remembered in the same way as the games of their namesake, they’re going the wrong way about it.