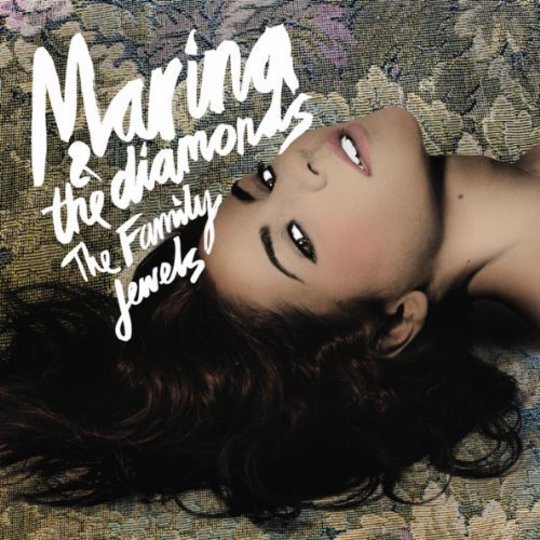 In attempting to straddle the tricky divide between 'credible' and 'pop', Marina and the Diamonds ends up encountering similar problems to label-mate Little Boots. After two limited releases last year on the Neon Gold imprint, Marina has opted for the slow-build, unleashing the lovely and understated piano ballad 'Obsessions' last February, followed by the almost-perfect pop paean to outsiderhood, 'I'm Not A Robot' (still two of the strongest tracks on show here). However, after drawing in Regina Spektor fans everywhere - including Perez Hilton - with crafted songs about OCDs and shopping for crackers, now Marina has gone and made a 'pop' album. Or at least one that wants to sound like one.

The Family Jewels is a 'fun' sounding record of cartoonish proportions (more on how that sits a little awkwardly with the lyrics later...). We get the pop-punk ska of 'Girls' and the uber shiny pop of the Abba-esque 'Shampain' where she recasts Francis Bacon's famous lines about sham-pain/champagne in a frothy three minutes of camp pop. But the quite charming Amanda-Palmer-esque 'Are You Satisfied?' and the quirky 'Hermit the Frog' rub up against the pop-perfect shimmer of recent single 'Hollywood.

You get a sense that this is an album still very much struggling with the central question that the song 'Mowgli's Road' poses: "well I don't know... who I want to be". It's a record that musically says " Y-E-S to everything" and isn't itself sure of what it is. Does Marina want to be a British Regina, penning lovely piano tunes like 'Numb', or is she taking aim at being the UK's answer to Gwen Stefani, as tracks like 'Oh No' and 'Girls' would suggest? This is the inherent problem with an album that I really want to like (mostly for its autobiographical frankness) but whose sickly sweet melody confection makes it a little hard to swallow in one sitting. You end up needing a bit of palette cleanser in between tracks as Marina and chums throw in everything and the kitchen sink.

Yes, we get a variety of instruments, noises, shrieks, wails and robot voice effects (all of which on the surface point to the ubiquitous Kate Bush comparisons that have been flying around). However, with the exception of the aforementioned early singles, it all adds up to a somewhat wearying bombardment of the senses. Hurling an increasing cacophony of styles and genres at us as it progresses, the album ends up sounding less and less like a coherent piece of work. Atop this veritable feast of ideas jostling for place is one of those hugely mannered voices that, to be honest, you're either going to love or hate. Not blessed with the best voice 'naturally' speaking (as the live shows and acoustic sessions reveal), Marina has developed this rather peculiar habit of injecting every other line with a Britney-esque braying. She veers from this overly stylized vibrato warbling to an androgynous new wave alto honk that at one point in current single 'Hollywood' also veers on a Kate Nash parody where she speak-sings (let's call it 'spinging') - "oh my GAWD you look just like Shakira / Oh no it's Catherine Zeta / ACK CHELEE my name's Marina").

Currently being heralded as the heir apparent to Florence Welch's throne, a quick glance at the album's idiosyncratic lyric sheet will tell you that this is at once a fulfillment of a lifelong dream of fame at any cost ("cos all I care about / Is being Number One" - 'Numb') and an uneasy prospect ("I'm gonna fail / gonna die die die" - 'Oh No') for the terminally ambitious Ms. Diamandis. Drawing equally on the Lily Allen school of kitchen-sink banality and, with her meditation on ambition and sacrifice, an extended album length re-write of Stefani's 'What You Waiting For?' (a song she covered at some of her earlier gigs), Marina's lyrics plough the terrain of self doubt, ambition and sacrifice, the lure of false images of beauty, loneliness and vulnerability. This catalogue of the struggle to find her way as an artist makes The Family Jewels, thematically speaking, a more interesting prospect than most. However, those Kate Bush comparisons end up ringing a little hollow except for where a couple of songs borrow the plinky-plonky keyboards of 'There Goes A Tennner' or Marina does her best to adopt an impression of that voice. And herein lies the rub. Artists like this are being offered up as a new generation of innovators when, in truth, they rarely move much beyond merely ventriloquizing the vocal 'kookiness' to which Bush's rather more rich musical legacy has been reduced. The "quirkiness" of this record is confined mostly to the lyrical freshness which, although it can be quite charming in places, is undermined by the incongruously slick and sometimes crowded productions of co-writers Liam Howe (Ex-Sneaker Pimps), Biff Stannard (Kylie) Greg Kurtsin, and Pascal Gabriel.

Marina herself proclaims in Mowgli's Road; "I want to be cuckoo" but with songwriting that tends towards the idiosyncratic and production that screams "commercial pop hit", The Family Jewels seems to be to be symptomatic of a broader trend at the moment to demand our female artists be both credible and commercial at the expense of achieving anything great in either camp.