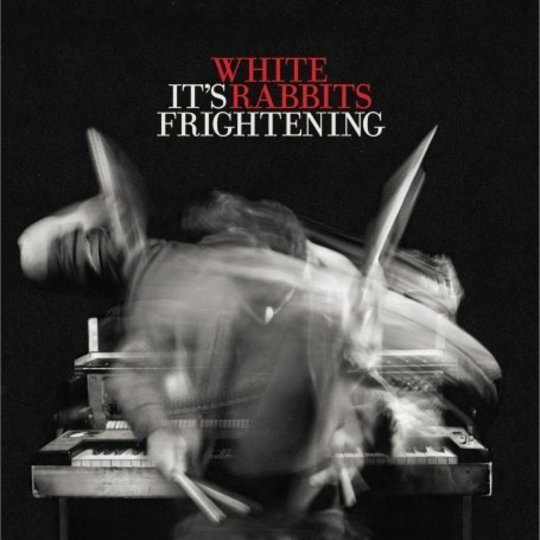 To many, competence is considered to be a positive attribute. In a lot of walks of life, whether of the everyday variety or in the public eye, the ability to set about your task in a steady and consistent manner is often commended. Even in this minefield we loosely call alternative music, it will always be those wilfully adequate careerist plodders who garner the filthy lucre. However, I’d still like to think that most right-minded music fans would plump for a creative spark over unswerving professionalism every time.

All of which brings me on to the second album from White Rabbits. On It’s Frightening, the New York-based six-piece display an acute proficiency when it comes to the art of song structure. There’s a lot to admire here, from the bouncy pianos, urgent drums and the vocals which are delivered in a manner vaguely reminiscent of Hail to the Thief-era Thom Yorke. There are plenty of interesting musical ideas thrown into the mix, too, like the creepily grandiose piano breakdown in the middle of ‘They Done Wrong, We Done Wrong’ or the minute or so of gentle ambience which gives way to the paranoid beat of ‘Lionesse’. The big problem is that for all this professionalism, there just isn’t quite enough of that intangible magic which makes you want to keep coming back to an album time and time again.

Things start off promisingly enough with recent single ‘Percussion Gun’, which in spite of its uneasily self-referencing title, is an enjoyable enough song, carried along by a tribal drumbeat and Stephen Patterson’s vocal hysterics. For a while, the album sticks to a fairly similar vein, taking in another of its highpoints ‘Lionesse’, until ‘Company I Keep’ threatens to derail the whole affair halfway through. You can see exactly what effect they are going for here; the mid-tempo centrepiece which lifts things up to the next level and also allows a bit of breathing space after the mildly furious moments which peppered the first half of the record. As it turns out, though, it ends up falling flat and just comes across as a bit drab, undoing a lot of the momentum which has been built up earlier on. The album never really recovers from this frustration, and indeed, it’s not the only moment of mediocrity we see in the second half. This is in spite of the best efforts of the mildly sinister ‘Midnight and I’ on which Patterson coos "Get to sleep now" as creepily as he can.

It’s Frightening is by no means a record which is without merit. I suspect that the production work of Spoon’s Britt Daniel has infused it with more presence than it might otherwise have had. However, that notwithstanding, the album’s lack of anything substantial to get your teeth into proves fatal. In an age where unfathomable amounts of music are but a click away, I fear White Rabbits might be destined to be one of those bands which fade meekly into the background.