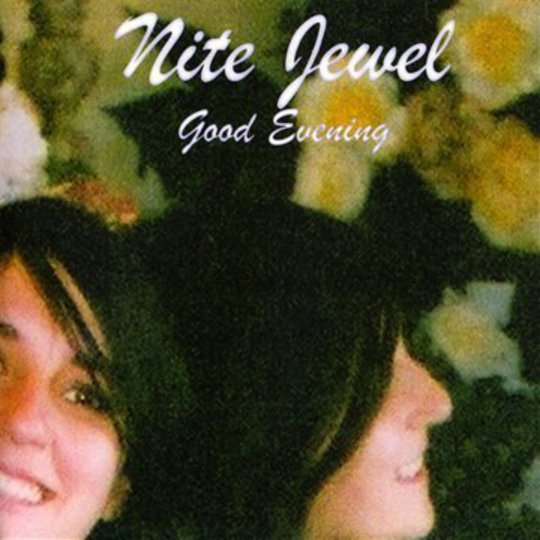 Forget chillwave and glo-fi and nostalgia for a version of the Eighties that didn’t exist. Nite Jewel’s Good Evening is a great Los Angeles album. It’s impossible to imagine this music being made anywhere else. It’s as L.A. as John Lautner’s Chemosphere, the Venice Beach boardwalk and Dennis Wilson’s Pacific Ocean Blue. If you drive through Malibu Canyon at 3am, a rolling haze known as the 'marine layer' prevents you from seeing anything more than a couple of feet ahead. This meeting of cool air from the ocean and warm air from inland smudges the world just out of focus, inducing a paralyzing mixture of terror, bewilderment and awe-struck wonder amid the pluming nebula.

It’s an atmosphere that Ramona Gonzalez, the composer, arranger and songwriter behind Nite Jewel, funnels into her music. Her past lies in multimedia video and sound installations, collaborations with members of Ariel Pink’s Haunted Graffiti, and a philosophy degree at Occidental College. Her present involves sketching vaporous outlines of pop songs that are smothered in a glassy patina that crackles and blisters under the tape hiss of Gonzalez’s trusty eight-track. It’s an odd, disconcerting contrast, where the shiny parts of pop are expertly slotted together, only to be obfuscated by vocals rendered cloudy and indecipherable via a combination of lo-fi production values and great swells of bass muscling up into the mix to muffle the sheen.

Good Evening is certainly well titled. The opening ‘Bottom Rung’ is the sound of waking up with the sun in your eyes and then wobbling off balance as you realise it’s the orangey dwindling fade of late afternoon and not the piercing luminosity of early morning. The first few seconds almost collapse inwardly on themselves before Gonzalez pulls together her soupy white funk noir, where the vocals drift somewhere just out of reach, but are so alluring that they entice the listener to sing along in garbled Nite Jewel-speak.

The rest of the record is a groggy trip out of the fading sun and into the early evening. ‘Suburbia’ is the feeling of being the only person on foot as you choke on gas fumes and wipe the sticky California sweat from your brow, desperately seeking a bar to shake off a hangover in an anonymous tree-lined L.A. backstreet. That light-headed feeling, of wanting to throw-up but somehow holding it together to get to where you’re going, remains a constant in the Nite Jewel sound. Even the stilted disco of ‘Weak For Me’ and the sprightly ebullience of ‘Artificial Intelligence’ are clogged up with that punch-drunk, queasy, unsteady-on-your-feet sensation, where the world feels like it’s slowly being tugged out from under you.

Much has been made of the Eighties reference points in Gonzalez’s music, and people that covet rare Rah Band b-sides are likely to find much to love here. But most of the key touchstones for Nite Jewel’s music are a decade earlier, in the fizzy artifice of Giorgio Moroder’s ‘From Here to Eternity’ and the other-pop of Roxy Music’s first couple of albums. It’s also a strangely muted sort of dance music, executed at half-speed and constructed from insular, inward-looking grooves that are not only made alone in Gonzalez’s bedroom, but also sound like they’re designed to be danced to alone after the house lights go up, where a few lone ravers shuffle toe to toe, drowning in pools of deep reflection.

Gonzalez finds her voice as the album progresses—it’s even possible to make out discernable lyrics on the forlorn ‘Lover’, which sounds like the Pointer Sisters’ ‘Automatic’ on a fistful of downers. She’s made further positive strides in that direction by hooking up with Dam-Funk for the Nite Funk project, where her vocals are shoved right up in the mix and smoulder like a husky-voiced diva well in advance of Gonzalez’s tender years. She may be about to extract herself from the heat-warped dazzle pop of Good Evening, which is probably a good idea considering the amount of opaque imitators crushing hard on her heels, but for now Gonzalez has created one of the most understated and beautifully murky pop records of 2009.