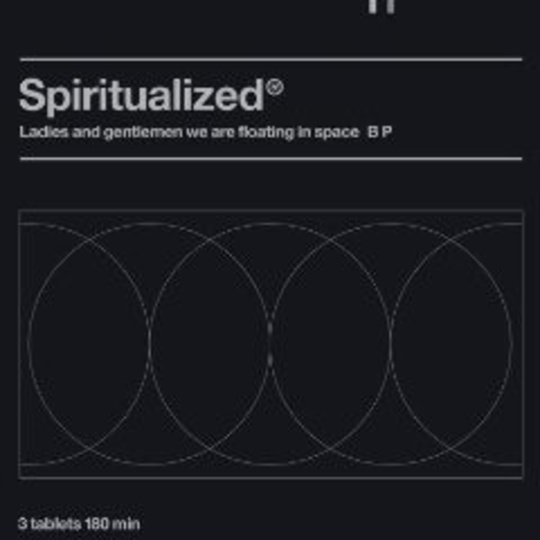 "Only philosophers embark on this perilous expedition to the outermost reaches of language and existence. Some of them fall off, but others cling on desperately and yell at the people nestling deep in the snug softness, stuffing themselves with delicious food and drink. 'Ladies and Gentlemen,' they yell, 'we are floating in space!' But none of the people down there care."

In October Spiritualized revisited their high water mark, and performed Ladies And Gentlemen We Are Floating In Space in full for four nights with the help of a string section, horn players, and backing vocals from the London Community Gospel Choir. These Don't Look Back shows can be the sign of a desperate band (or at least one after a quick buck - hello Sonic Youth). Spiritualized are not a desperate band. They're still recording and touring, and are still fairly acclaimed (although how much of this is due to their masterpiece is difficult to answer). Following this release the band became more overblown, Let It Come Down drowning in its own orchestration, while Amazing Grace simplified things too much. Songs in A & E saw Spiritualized return to ground, but without that same magic.

Perhaps the success of Ladies And Gentlemen... lay in its forging. It was recorded at a time of great emotional turmoil. Jason Pierce's girlfriend, and keyboardist (for the recording of this album as well) Kate Radley had secretly married Richard Ashcroft. Pierce changed from being a recreational user of drugs into an addict.

The churning blues rock of 'Come Together' features the most explicit reference to all of this - “Little J is sad and fucked / First he jumped and then he looked / The tracks of time those tracks of mine / Little J is occupied.” Elsewhere he declares “Sometimes have my breakfast right off of a mirror / And sometime have it straight out of a bottle” ('Home Of The Brave') and “Hey man, there's a hole in my arm where all the money goes” ('Cop Shoot Cop'). It would be an understatement to say this was a rough patch.

The opening quote of this review (where Jason Pierce took the album name from) shows what Ladies And Gentlemen We Are Floating In Space is all about – the outer realms of existence. Album opener 'Ladies And Gentlemen...' reflects a heart-rending plea to his lover (presumably Kate, whose voice is the first thing you hear on the record). “I will love you 'til I die/ And I will love you all the time / So please put your sweet hand in mine / And float in space / And drift in time.” These were desperate times. The remastered version is now as the track was originally intended, with the song fading out to the Elvis Presley lines “Wise Men say only fools rush in / But I cant help falling in love with you.” It only adds to the melancholy. These references are littered throughout, no better exemplified by 'Broken Heart', but you all knew that. Its tender organ intro, with cracked vocals crooning over orchestral horns, before dissolving into orchestral strings, is a standout from an album of standouts.

The passages of noise and the crescendos throughout the album can be seen as an articulation of the pain/conflict within the band, and particularly Jason Pierce at the time (if we're going to get all music student about this). This is a record hewn from the greatest depths of human despair, but somehow it all feels positive. It is transcendental, escapist. 'Stay With Me' is all washes of fuzz and gentle guitar, layers clicking round like clockwork, new cogs being added to the machine. 'Cop Shoot Cop' is the kind of track that doesn't get made much anymore. This is the digital age, albums are dying. When there's a delete button, people don't have time for epic, jazz-fuelled 17 minute doodles, no matter how magnificent. It's from a different era. This record was all about ambition – the marrying of rock and gospel and choirs and orchestras and blues and drone and noise and soul, to a theme of love and drugs.

Changes between the original and the remastered album are largely negligible, bar the altered opening track. The production is now slightly crisper, but it's barely noticeable. The 35 bonus tracks of alternate versions add colour and intrigue, but few make any argument to being at all essential. This is a record very much deserving of a celebratory edition, but this edition makes few claims to being essential, unless your interests lie in the packaging – mini CDs in an oversize pill packet in a homage to the original, signed prescription cards and new artwork.

A capella versions of 'Ladies And Gentlemen...' showcase the beautiful harmonies that fill the record, and emphasise the religious overtones of all of Spiritualized's music, with its organs and choirs, but that's it. The choir-only version of the opening track sounds fairly majestic. Other interesting moments include J Spaceman doing his best Bobby Gillespie when he asks “Ok, I want all you ladies to start singing now” during one version of 'I Think I'm In Love', or how the 'A Cappella With Lead Vocal' version of 'Ladies And Gentlemen...' ends with Jason Pierce using that vocal effect that sounds like he is an actual spaceman to isolating, quietly devastating impact. Some of these tracks are the equal of the final version. The chaotic noise on the demo of 'All Of My Thoughts' is brought into line with a strong melodic piano line. It improves it.

Other tracks are less useful for examining the mechanics. The 'Home Of The Brave' demo goes on for four minutes – it's bloated, and a waste without the vocals. The 'No God Only Religion' demo suffers similarly. The keyboard on the 'Electricity' demo sounds like it came from an end of pier bingo hall somewhere, and doesn't fit in with the almost shoegaze vocals. There is one new track here – 'Rocket Shaped Song' – eight minutes of ambient keyboard and guitar. It's almost electronica, and in that it becomes obvious why it didn't make the album. It doesn't fit in with the unifying vision of styles and words.

An argument could be made that this was one of the nails in the coffin of unambitious Britpop. A couple of years before Ladies And Gentlemen..., in 1995, the NME's albums of the year (as good an aggregate of critical opinion and cultural popularity as any) included Pulp, Blur, Oasis and Supergrass in the top 10. Switch forward to 1998 (a year after Spiritualized topped the poll ahead of OK Computer, another record which helped kill Britpop) and the top three are Mercury Rev, The Beastie Boys and Beck. British dominance was over. After hearing the ambition of Ladies And Gentlemen... it was time to go back to the rehearsal rooms. Spiritualized had rewritten the rules of what British bands could do. A new age was ushered in.

And yet, no one has tried to copy them. Ladies And Gentlemen... stands alone, a unique record, a symbiosis of rock, blues, soul, gospel, orchestras, drone and jazz, forged out of some profound heartbreak, and some less profound drug taking. It's complex, timeless. All the tracks are unique and stand separated from the rest, but somehow it all binds together into a cohesive whole. They weren't part of any genre group. They seem isolated, perhaps further exaggerated by the perception that this is Jason Pierce's work. No one from that recording remains in Spiritualized anymore. He is a survivor, an auteur. And like him, this album stands alone.